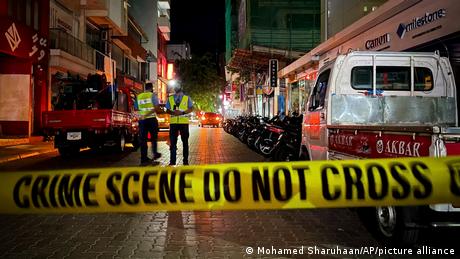 Maldives police on Sunday said they have arrested the prime suspect in the explosion that targeted the country's former president.

The blast on Thursday night outside former President Mohamed Nasheed's home in the capital city of Male left him in a critical condition.

Police say they now have in their custody three of the four suspects involved in the explosion, blamed on Islamic extremists.

Police did not provide further details on the suspect but appealed for more information about another man seen in the area of the attack.

Hospital officials said the 53-year-old ex-president remains in an intensive care unit after surgeries to his head, chest, abdomen and limbs.

The ex-president, now the parliament's speaker, underwent 16 hours of surgery to remove shrapnel from his body. Doctors said shrapnel damaged his intestines and liver, and one shard narrowly missed his heart.

Nasheed became the first democratically-elected president in 2008, ending decades of one-party rule in the Maldives. He was toppled in a military-backed coup in 2012.

He is known internationally as a champion in the fight against climate change and an outspoken critic of religious extremism in the predominantly Sunni Muslim nation.

What do we know about the attack?

The bomb was planted on a motorcycle parked by Nasheed's house. It exploded as he walked to his car.

Police arrested the owner of the motorcycle and another man on Saturday.

Two of Nasheed's bodyguards and two bystanders, including a British citizen, were also wounded.

Prosecutor General Hussain Shameem said on Saturday that investigators did not know which Islamist group was responsible.

Officers from the Australian Federal Police were assisting with the investigation, following a request from the Maldives, according to the Associated Press. A British investigator was also expected to help with the probe.

The Indian Ocean archipelago of 340,000 people has one of the highest per-capita numbers of militants who fought in Syria and Iraq alongside the "Islamic State" (IS) armed group.