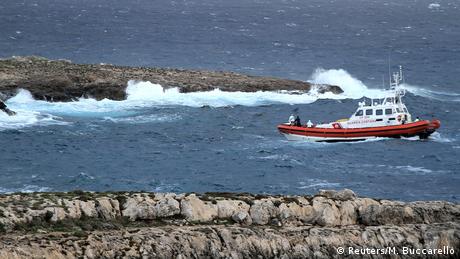 Several boats carrying an estimated 1,200 people were intercepted in the vicinity of the Italian island of Lampedusa on Sunday, Italian media reported.

The small island, situated to the south of Malta and far closer to the Tunisian and Libyan coasts than the rest of Italy, is one of the main landing points for migrants and refugees making their way to Europe.

The mayor of Lampedusa, Toto Martello, said that migration routes in the Mediterranean Sea were opening again.

"We need to restart discussions about the immigration issue," he added.

According to Italian media, some nine boats were intercepted or landed on the island on Sunday.

A drifting fishing vessel carrying almost 400 people of different nationalities, including women and children, landed on the island in the morning.

A 20-meter boat with some 325 people on board was intercepted by Italian police around 8 miles (13 kilometers) off the coast of Lampedusa.

The boats were intercepted and escorted by patrol vessels belonging to the Italian tax police who deal with smuggling.

The arrivals were tested for coronavirus.

There were no rescue boats in the area at the time as one of the vessels belonging to the German humanitarian organization Sea-Watch remained impounded by authorities on the island of Sicily.

The "Sea-Watch 4," which was previously held in the port of Palermo for over six months, was found to have too many life jackets and an insufficient sewage system for the number of people it could potentially rescue.

Activists have claimed that the order to hold the ship is just an excuse to block its activities. Another ship belonging to the organization was impounded by the Italian coastguard in March, over safety issues.

The Alan Kurdi ship from another German humanitarian group, Sea-Eye, was expected to reach the area on Sunday, Spanish agency EFE reported.

The Mediterranean route between the north African coast and Italy is one of the most dangerous in the world.

Numbers have declined in recent years, but some 6,000 have made the journey this year to date, according to the International Organization for Migration (IOM).

The arrival of people fleeing poverty and conflict has fueled anti-immigration sentiment and the rise of far-right political parties across Europe.