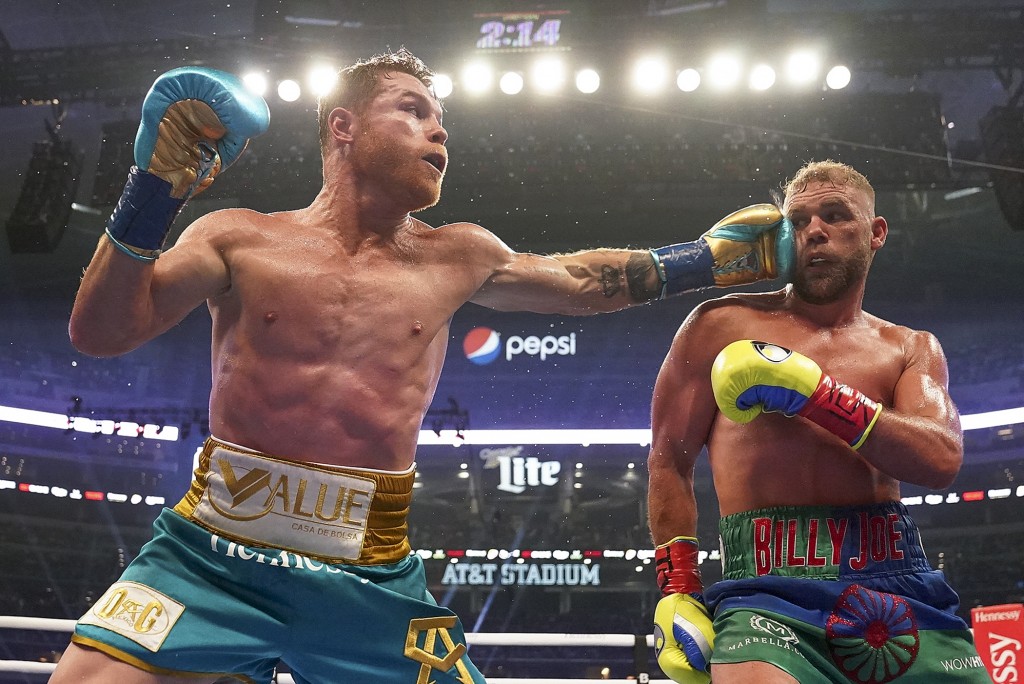 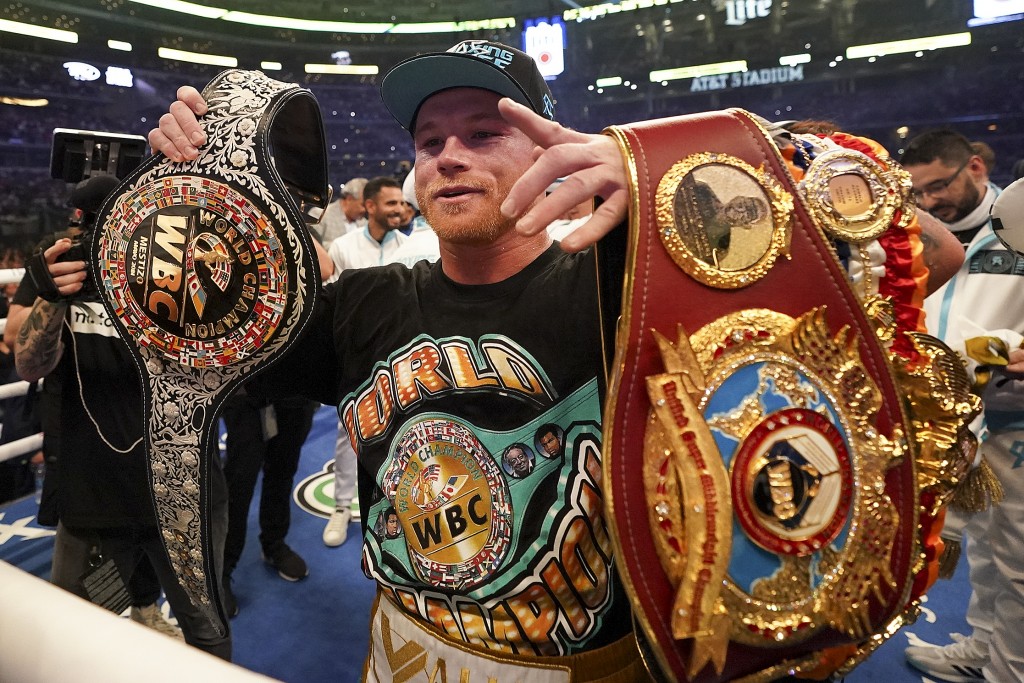 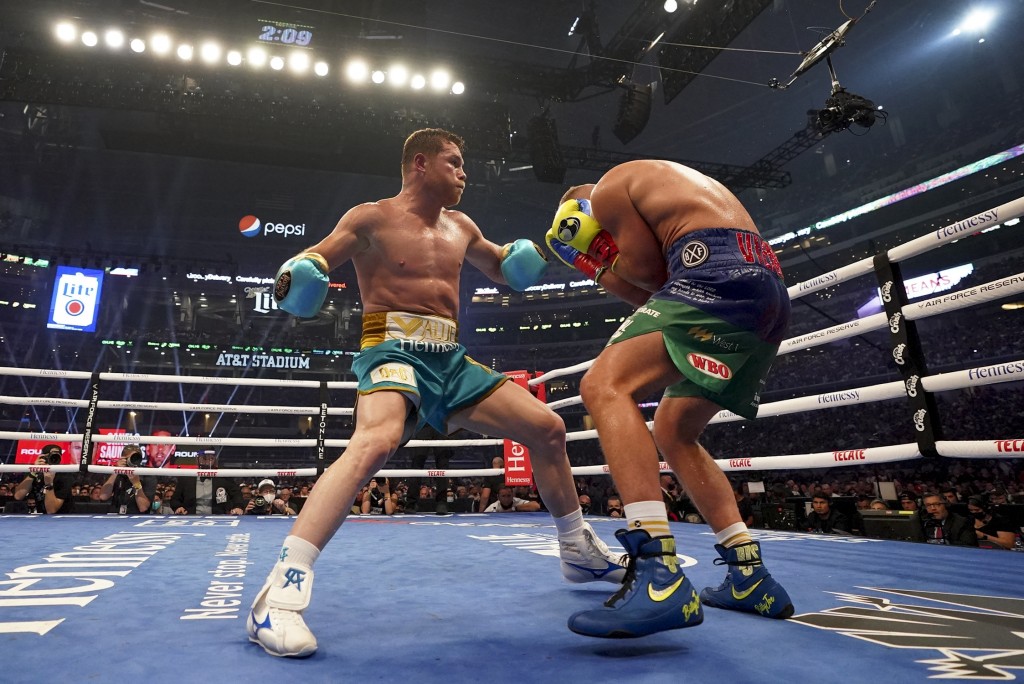 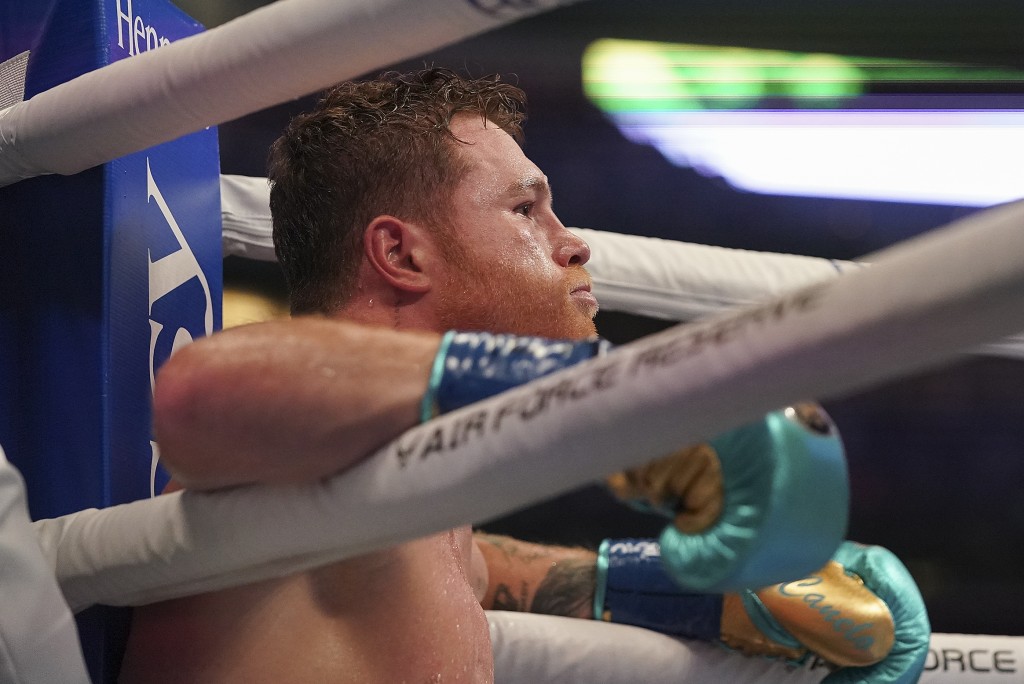 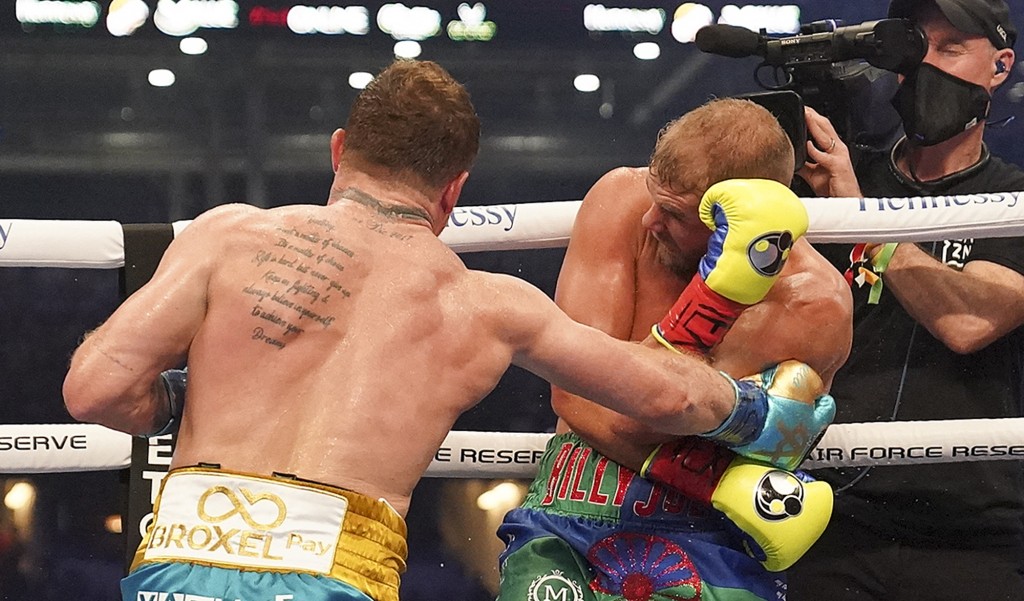 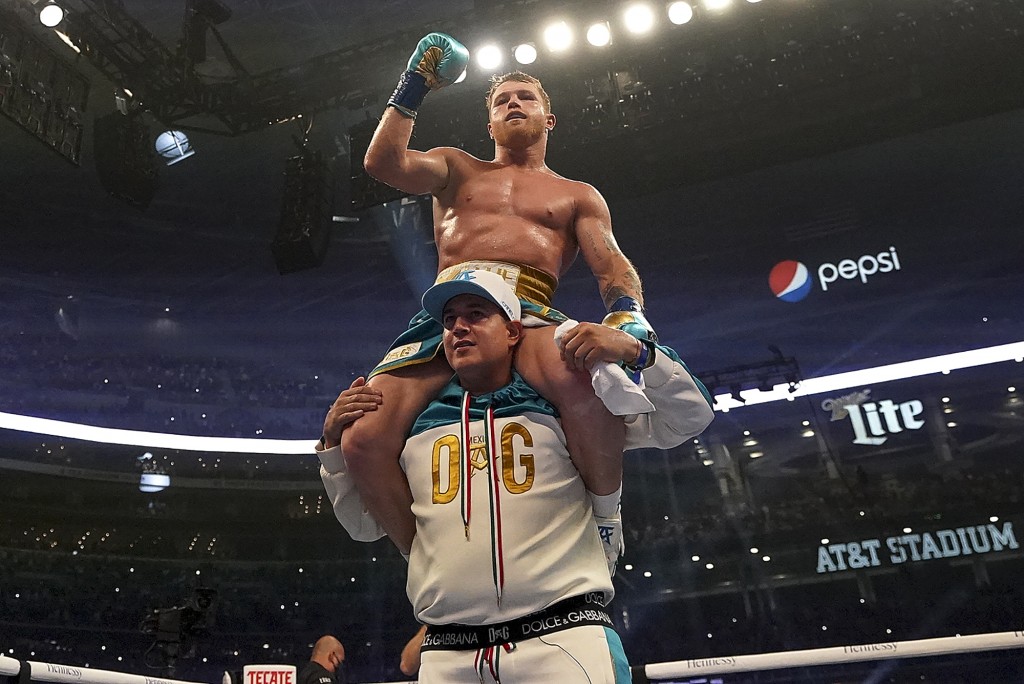 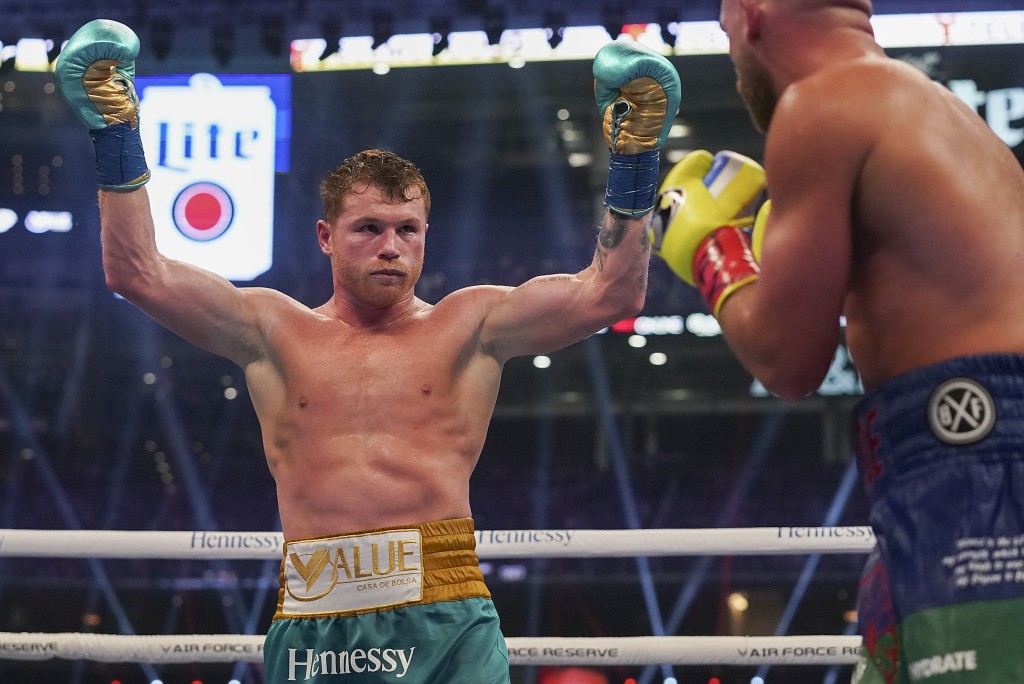 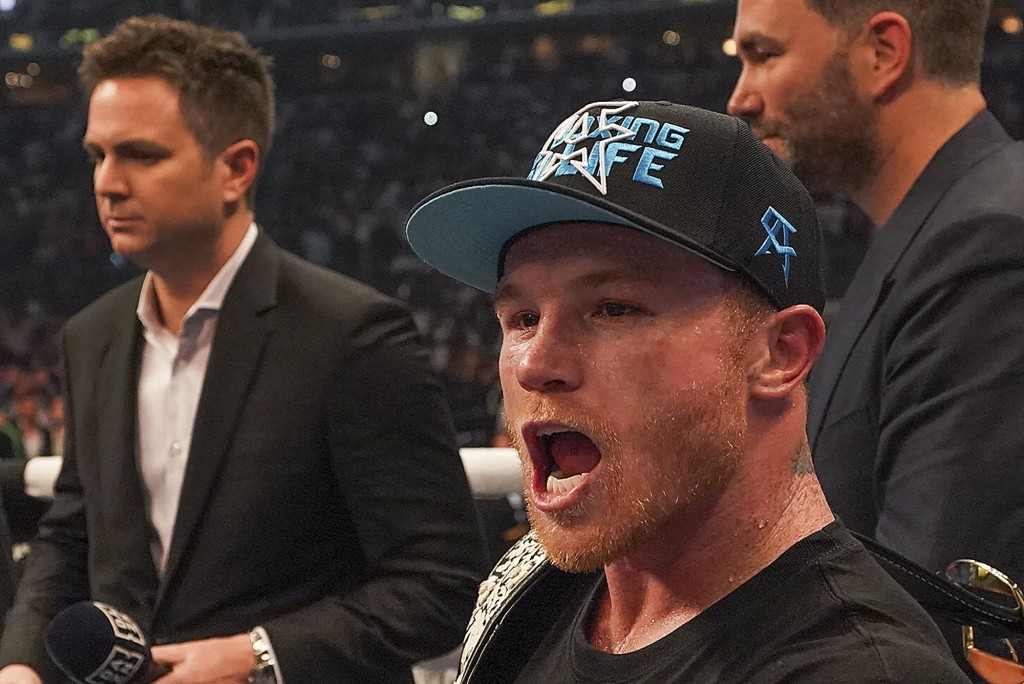 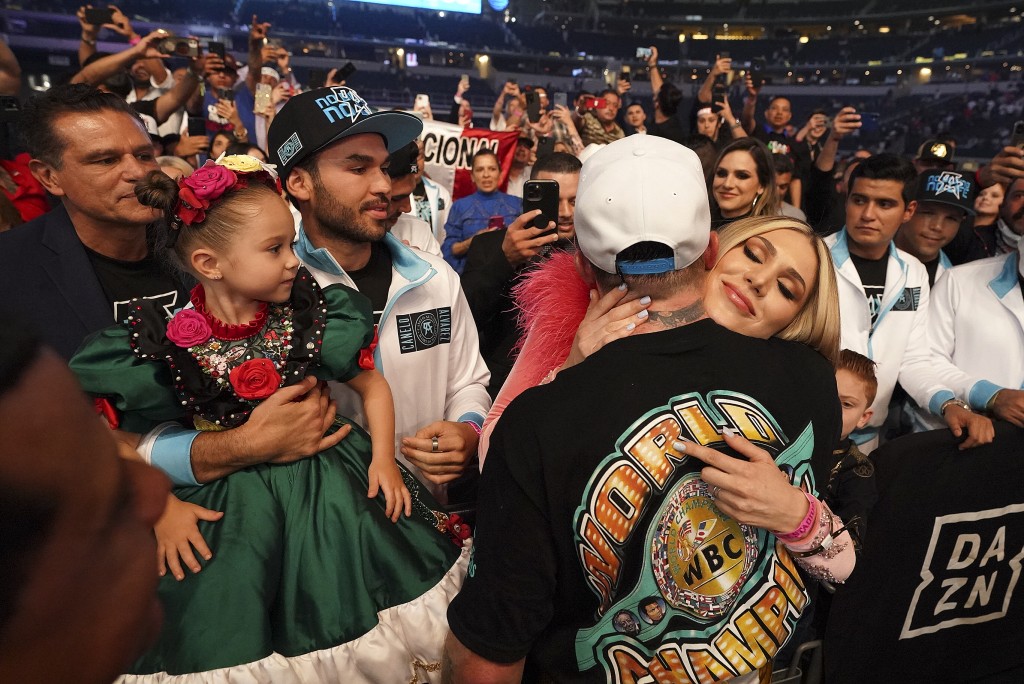 ARLINGTON, Texas (AP) — Big ring or small, Texas judges or not, Canelo Alvarez wasn't going to disappoint a huge pro-Mexico crowd in another fight in Texas.

The wildly popular Mexican added another belt in the super middleweight division, handing Billy Joe Saunders his first loss when the English boxer didn't come out for the ninth round Saturday night.

Alvarez set up another victory in his latest Cinco de Mayo bout with a staggering right hand in the middle of the eighth round, sending the raucous crowd of 73,126 at the home of the Dallas Cowboys into a frenzy as we waved his arms to encourage the noise while the round continued.

Saunders' corner waved in defeat before the ninth while treating a cut under his right eye. Alvarez (56-1-2, 38 knockouts) added Saunders' WBO belt to his WBA and WBC straps.

It was the first loss in 31 fights for the 31-year-old Brit, who was taken to the hospital with a suspected broken orbital bone, fight spokesman Anthony Leaver said.

The Saunders camp had threatened not to show because of concerns that the ring would be too small, and didn't want any judges from Texas, so close to neighboring Mexico. There weren't.

“I knew the fight was going to develop around the eighth round,” Alvarez, whose only defeated was to Floyd Mayweather Jr. in 2013, said through an interpreter. “It wasn’t as difficult as I expected. I know my preparation is good and I improve day-by-day.”

With pandemic restrictions on attendance long gone in Texas, the festive crowd at 80,000-seat AT&T Stadium was the biggest to date for a sporting event in the pandemic. Organizers have said it would break the U.S. indoor boxing attendance record of 63,352 set in 1978 at the Superdome in New Orleans when Muhammad Ali beat Leon Spinks.

It came a little more than a month after baseball's Texas Rangers had their home opener in the first full pro sports stadium since the COVID-19 shutdown early last year, right next door at Globe Life Field.

The distinction shouldn't last long with the Indianapolis 500 planning for about 135,000, or 40% of the track’s capacity, on May 30. But the pro-Mexico crowd enjoyed the moment, dumping decorum by booing in the early moments of the national anthem for Great Britain and singing along to the Mexican anthem.

The wildly popular Mexican fighter joined the folk singers and dancers during his ring walk, after emerging from the Cowboys’ locker room, which made sense as basically a home fight for the redhead.

Thousands of Mexican fans waved flags, some with “Vamos Canelo,” or “Let's go Canelo,” written on them. There were two fights among fans not far from the ring during the early rounds, which was more action than the slow-starting fight.

“It’s difficult to explain,” Alvarez said of his reaction to the crowd. “I don’t have the words. All the emotions I feel, they give me the motivation to continue on.”

After a tentative first round, the 30-year-old Alvarez took control before Saunders had his best rounds in the fifth and sixth, when the southpaw landed his best left hand of the fight. Before the eighth-round flurry, Alvarez was in control. He was ahead on all three scorecards.

In the co-main event, Elwin Soto defended his WBO junior flyweight title with a ninth-round technical knockout of Katsunari Takayama. It was the third title defense for the 24-year-old from Mexico.

Soto (19-1, 13 knockouts) almost sent Takayama (32-9) to the canvas in the first round and controlled the fight from there against the soon-to-be 38-year-old from Japan. The fight was called at 2:44 of the ninth.