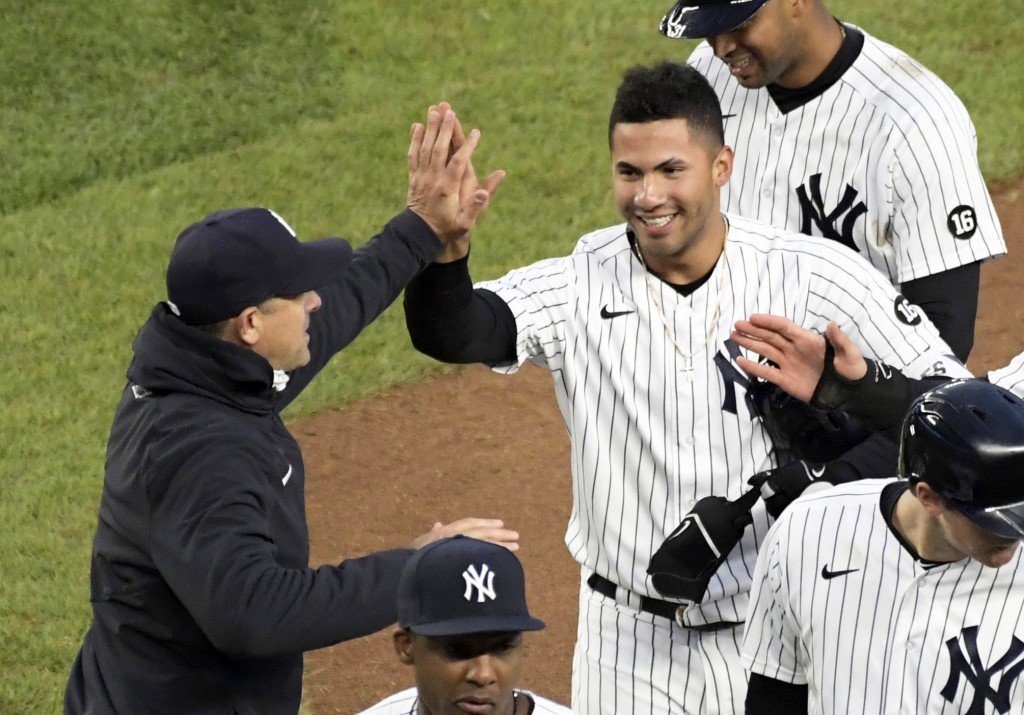 Kyle Higashioka’s home run tied the score at 1 in the third, Torres made it 2-all against Brad Hand in the ninth and Mike Ford’s single evened it 3-3 against Hand in the 10th.

With automatic runner DJ LeMahieu on second in the 11th, Tanner Rainey (0-2) walked Giancarlo Stanton on a full count and Aaron Judge on four pitches, loading the bases.

Washington went to a five-man infield, replacing left fielder Kyle Schwarber with Jordy Mercer. Torres hit a dribbler to the third-base side that bounced off Rainey’s bare hand as New York got its first walk-off win this season.

Brown added an RBI single in the seventh for key insurance before the Rays got one back in the eighth on Mike Zunino’s RBI single against Jake Diekman. Lou Trivino relieved and had to escape trouble recording the final four outs for his sixth save after blowing a chance in Thursday’s loss to Toronto.

Austin Allen also homered for Oakland to back Frankie Montas (4-2), whose day ended in the sixth one batter after Brandon Lowe’s two-run homer.

Rays right-hander Tyler Glasnow (4-2) struck out 11 and walked four over 5 2/3 innings while giving up three runs on two hits. The Rays stranded 11 baserunners. Center fielder Kevin Kiermaier sprained his left wrist trying to steal second base and was pulled from the game in the second inning. X-rays were negative.

Lightly regarded when the season began, the Giants (20-13) own the National League’s best record and a 2 1/2-game lead over second-place San Diego in the West.

Crawford ignited the Giants with his seventh homer of the season, a three-run drive in the third inning off Joe Musgrove (2-4).

Goldschmidt also had three RBIs and Nolan Arenado hit another double against his former team. The Cardinals have won eight straight and 14 of their last 15 games against Colorado at Busch Stadium.

Carlos Martínez (3-4) wound up winning his third straight start. He allowed five runs on six hits and five walks in five innings. Alex Reyes struck out the side in a scoreless ninth for his 10th save.

Willson Contreras and Eric Sogard each drove in a run for Chicago, which has won seven of nine to improve to 17-16.

Thompson (1-0) allowed two hits and a walk following starter Trevor Williams, who gave up two runs and five hits in four innings. Andrew Chafin worked a scoreless eighth and Craig Kimbrel got the final three outs for his sixth save.

Duffy pinch hit for Thompson and blooped a two-out single to right off reliever Clay Holmes to score Heyward — who led off with a walk against Sam Howard (2-2) and stole second. Ka’ai Tom hit his first big league homer and Adam Frazier had three hits for Pittsburgh, which has dropped eight of nine.

DETROIT (AP) — Slumping Miguel Cabrera hit a tiebreaking single to key a five-run burst in the seventh inning that sent Detroit over Minnesota.

Cabrera had two hits, raising his batting average to .149. The longtime star now has 2,876 hits, tied with Mel Ott for 44th on the all-time list.

Robbie Grossman had three hits, including a home run, for the Tigers. It was 2-all when Grossman and Harold Castro opened the seventh with singles off Tyler Duffey (0-2).