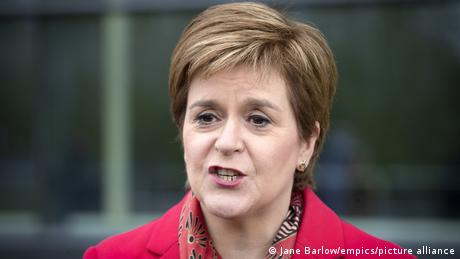 The Scottish National Party (SNP) has won regional parliamentary elections in Scotland, but failed to gain and absolute majority.

The win gives SNP leader Nicola Sturgeon a platform from which to launch a second Scottish independence referendum — otherwise known as "indyref2."

Sturgeon has long favored staging a second vote on leaving the UK and with the help of the Greens Party she would now seem to have the chance to do so.

Referring to UK Prime Minister Boris Johnson's threat to stop any such moves, Sturgeon on Saturday said, "there is simply no democratic justification whatsoever for Boris Johnson, or indeed for anyone else, seeking to block the right of the people of Scotland to choose our own future."

Though the SNP failed to win an outright parliamentary majority, it is the fourth election in a row in which the party has dominated at the polls.

Sturgeon has said her first priority will be to lead the country out of the coronavirus pandemic but independence has remained front of mind for the 50-year-old politician, "it looks as if it is beyond any doubt that there will be a pro-independence majority in that Scottish Parliament and by any normal standard of democracy that majority should have the commitments it made to the people of Scotland honored,'' Sturgeon said.

What has changed since the 2014 referendum?

The country's first independence referendum in September 2014 ended with 55% of Scottish voters preferring to remain part of the United Kingdom. A main driver of that result was the fact that by remaining in the UK, Scotland would also remain in the EU, that has of course changed with Brexit — which the majority of Scots (62%) voted against.

Ultimately, UK Prime Minister Boris Johnson will have the final say in the matter. He has called talk of a second referendum "irresponsible and reckless." However, should Sturgeon force the issue, Johnson would have to appeal to the UK Supreme Court to block the move.

Sturgeon has said the idea would be "an absurd discussion — if people in Scotland vote for a pro-independence majority in the Scottish parliament, no politician has got the right to stand in the way of that." Observers also say that such a move by Johnson would risk galvanizing support for independence.

Currently, the SNP has secured 64 of the Scottish Parliament's 129 seats — one shy of a majority. The Greens won eight seats, giving a pro-independence coalition a solid majority in Holyrood, the Edinburgh-based legislative body.