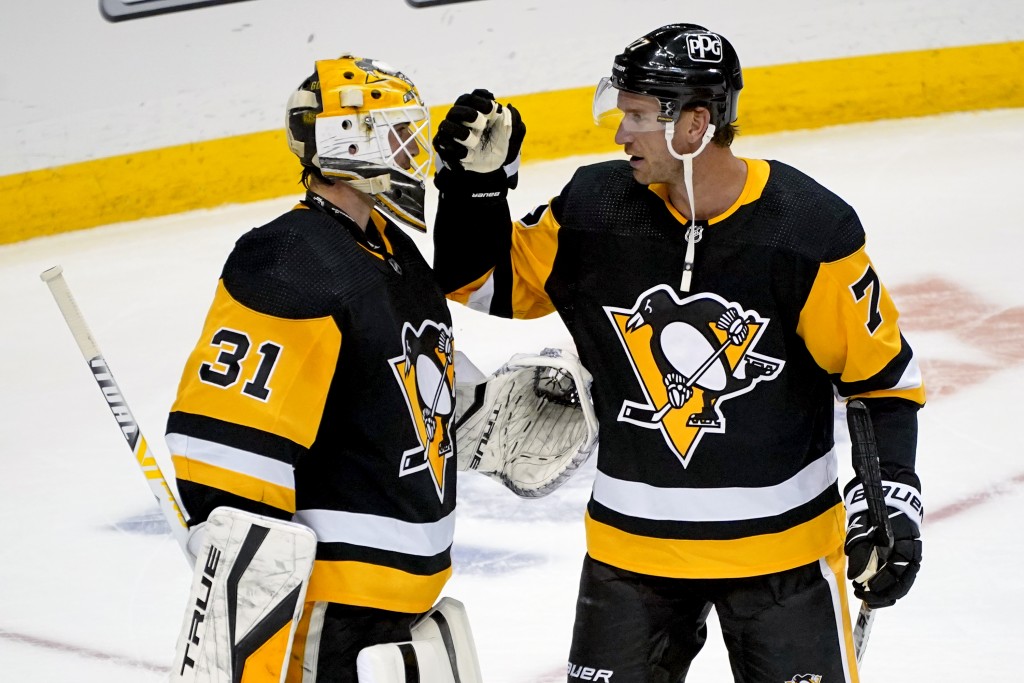 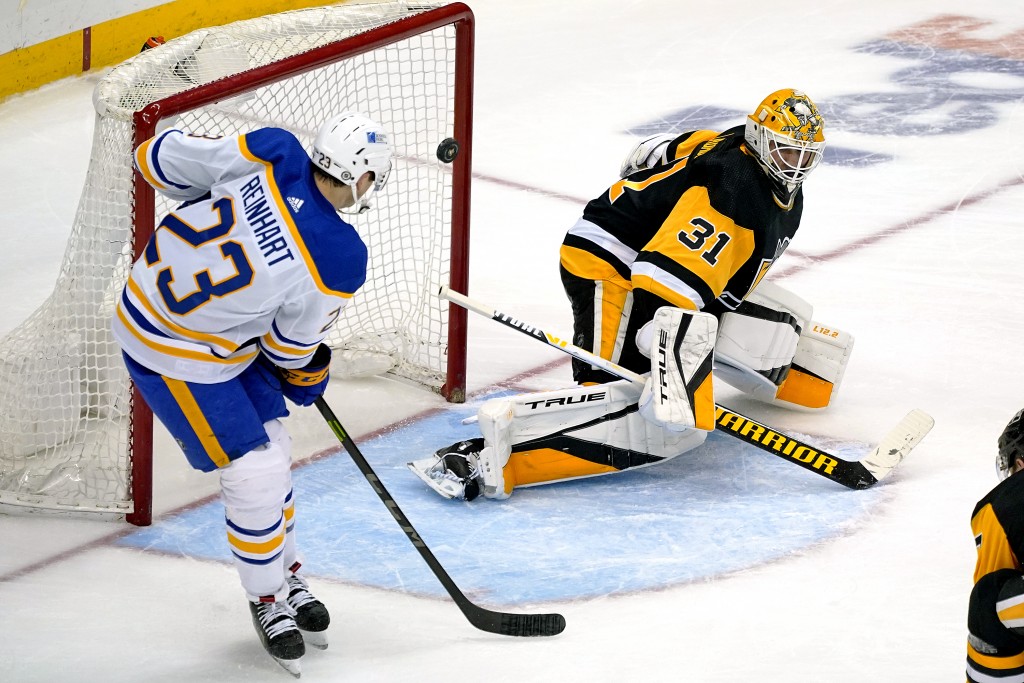 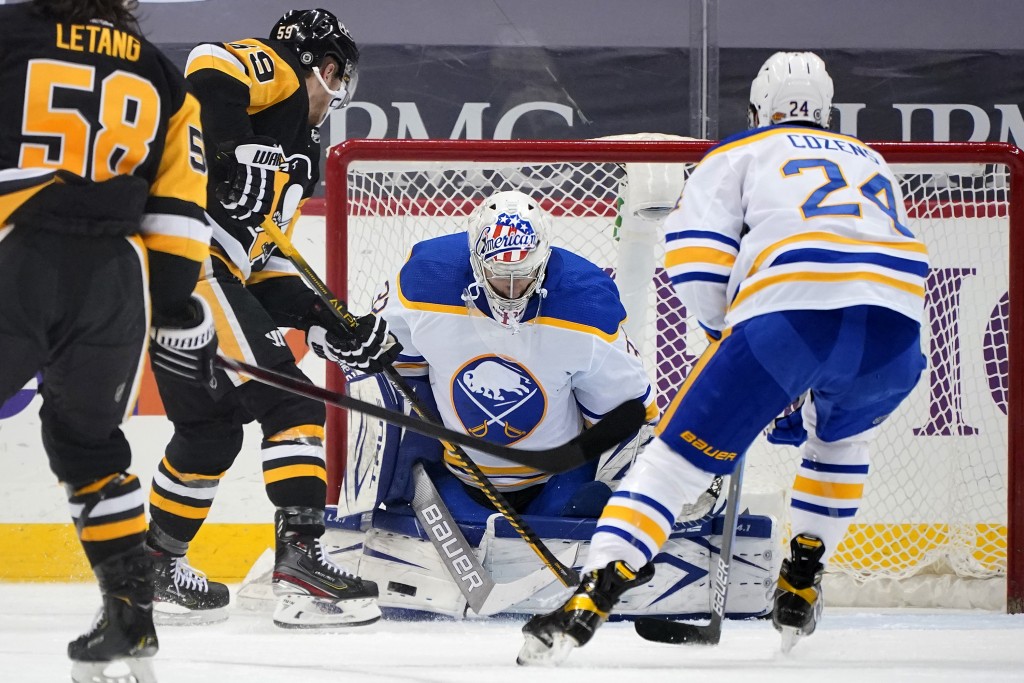 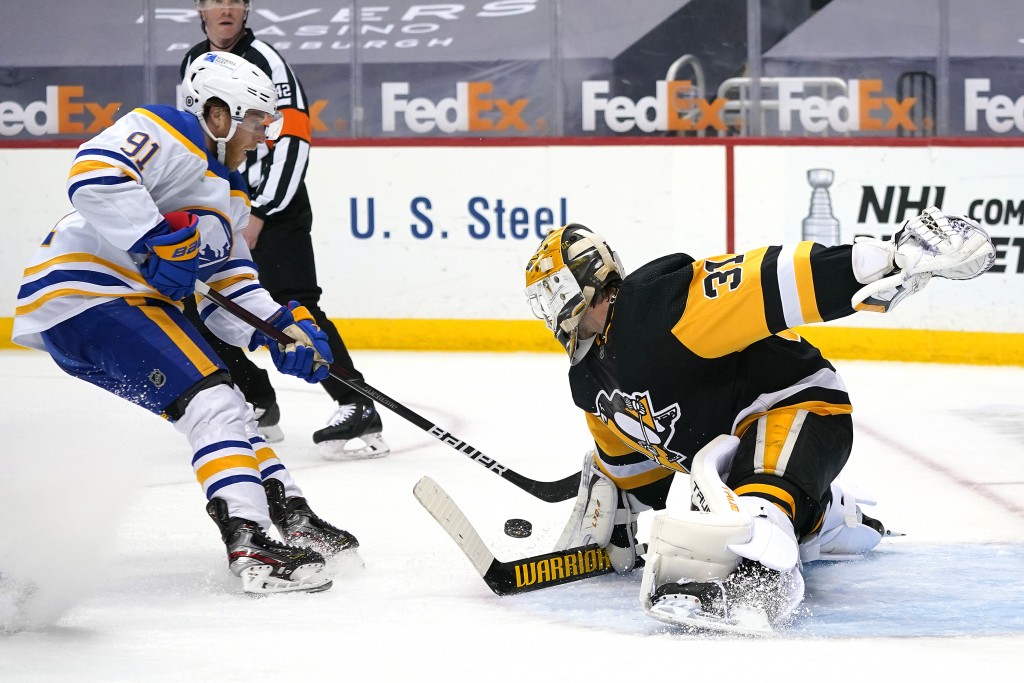 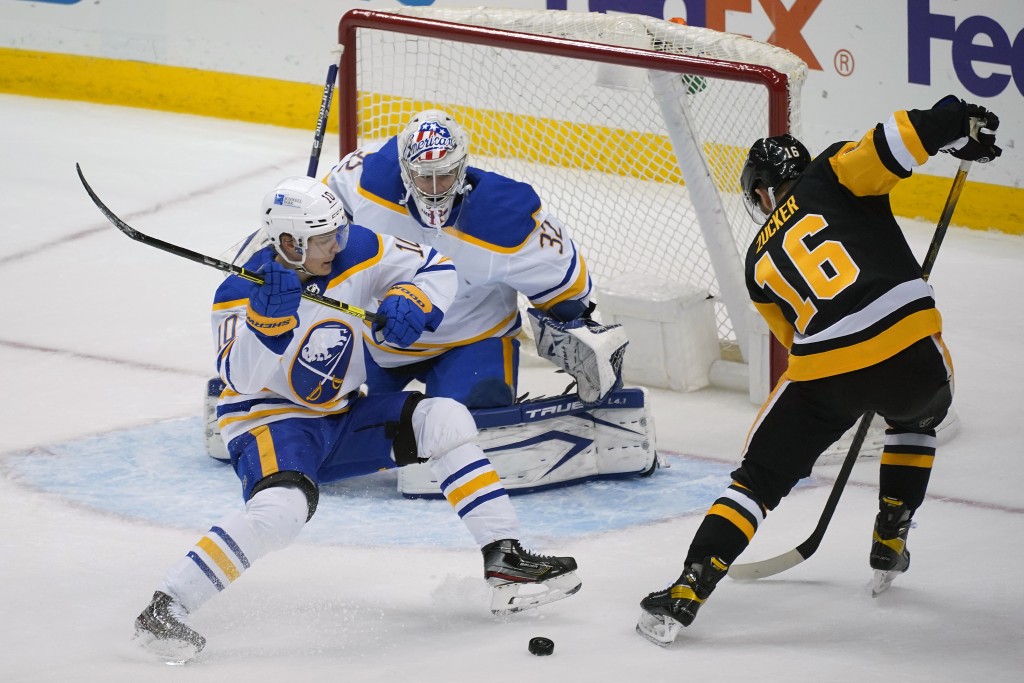 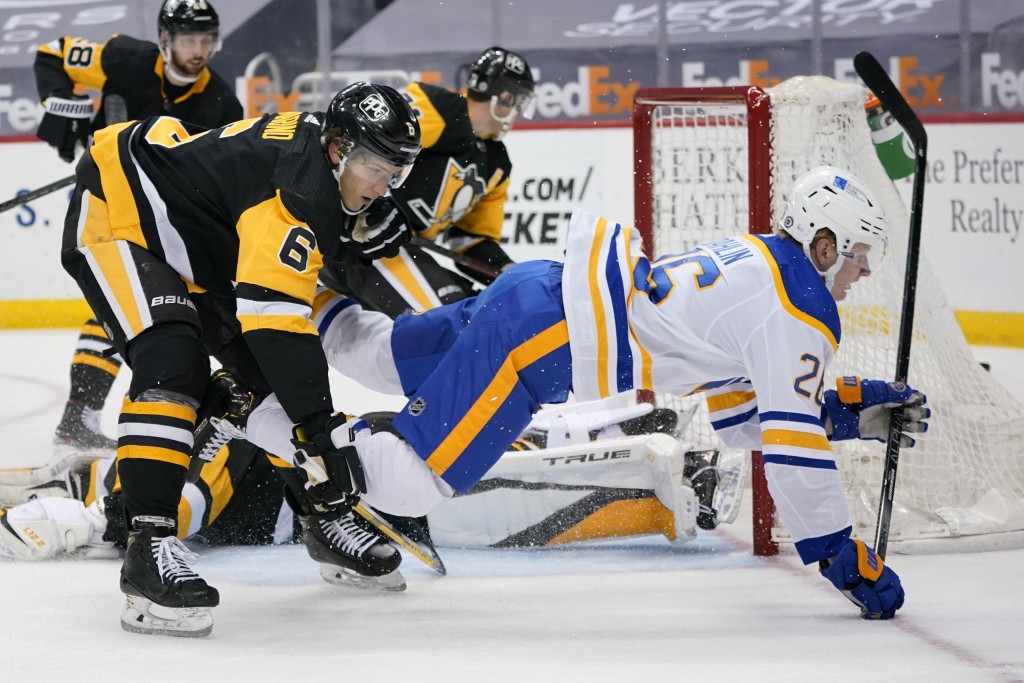 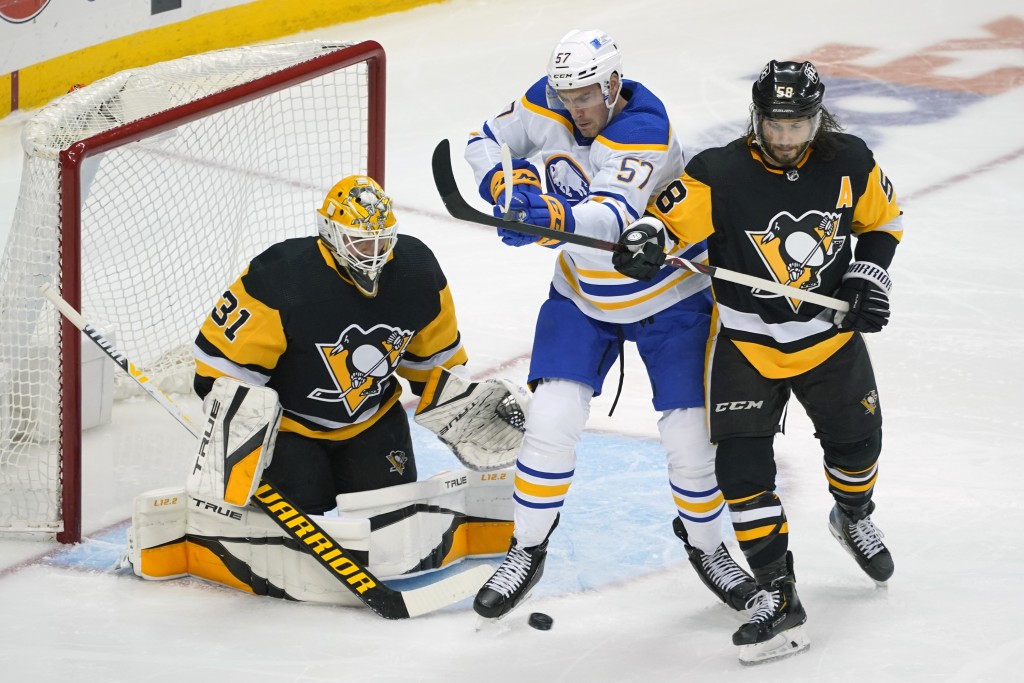 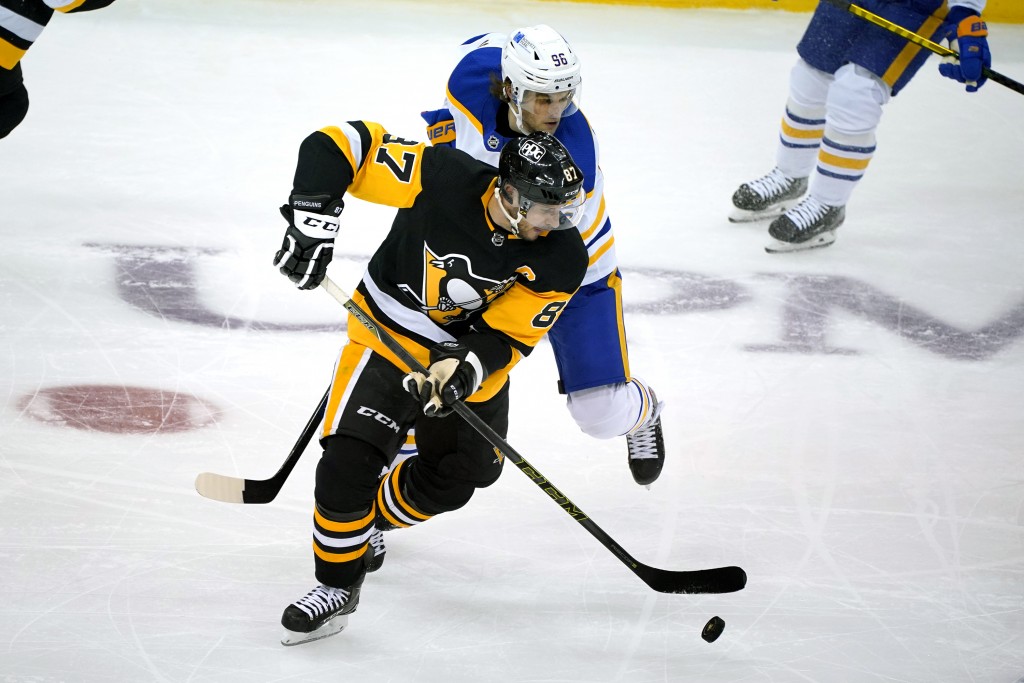 Lagace, making his first start in more than two years, got his seventh career win, and helped Pittsburgh clinch home-ice advantage in the opening round of the Stanley Cup playoffs. The Penguins were without Tristan Jarry and Casey DeSmith, their top two goaltenders, for the regular season finale.

Carter scored his 17th goal as the Penguins finished the regular season with 13 wins and points in 14 of their last 16 games. Pittsburgh also finished 22-4-2 at home, one of the best marks in the league.

Michael Houser, who grew up in northern Pittsburgh suburbs, made 22 saves for Buffalo. Houser made his fourth straight start for the Sabres, who used a NHL-high six goalies this season.

Lagace played with the Vegas Golden Knights when he made his last start on Feb. 1, 2019, against Carolina. Lagace, who played in his 18th NHL game, joined Pittsburgh as a free agent in the offseason, and split the year on the team’s taxi squad and minor league affiliate in Wilkes-Barre/Scranton. He served as the backup for five games with Pittsburgh, including the last two before Saturday’s start.

Lagace stopped Drake Caggiula on a breakaway late in the second period and made a point-blank save on Victor Olofsson in the third, both with Pittsburgh preserving a one-goal lead.

Carter scored the game’s only goal at 1:58 of the second period from Frederick Gaudreau. Carter had the first four-goal game of his career during an 8-4 win against the Sabres on Thursday. He has five of Pittsburgh’s last nine goals.

The Sabres endured an 18-game winless streak midway through the regular-season, but they won eight of their final 21 games. Buffalo missed the playoffs for the 10th straight season, but the Sabres outshot Pittsburgh 11-3 in the first period and 24-9, as they only trailed by a goal through 40 minutes.

Pittsburgh will finish no worse than second place in the East Division, following Saturday’s win. But the Penguins seek their ninth division title in franchise history and first since the 2013-14 season.

Pittsburgh can win the division championship if Washington fails to win its final two games in regulation.

Evgeni Malkin was unable to finish Saturday’s game against Buffalo. Teddy Blueger centered the second line late in the third period and Jared McCann replaced Malkin on the top unit during a late power play. Malkin, who didn’t play the final 8:48 of regulation, recently returned to the lineup after missing 23 games with a lower-body injury.

Penguins’ coach Mike Sullivan expects both Jarry and DeSmith to be ready when the playoffs start.

Penguins’ forward Brandon Tanev participated in his third full-contact practice on Friday, but he also missed the regular-season finale on Saturday. He missed his 18th consecutive game with an upper-body injury. Tanev has missed 24 of the last 26 games.

Penguins’ D Mike Matheson missed his fourth straight game after he was struck in the face with a puck May 1 at Washington.

Carter is one goal from becoming the 101st player in NHL history and the second from the 2003 NHL Draft class to record 400 goals.

Carter has nine goals and 11 points in 14 games since Pittsburgh acquired the veteran forward from Los Angeles before the trade deadline. Carter had eight goals in 40 games with the Kings this season.