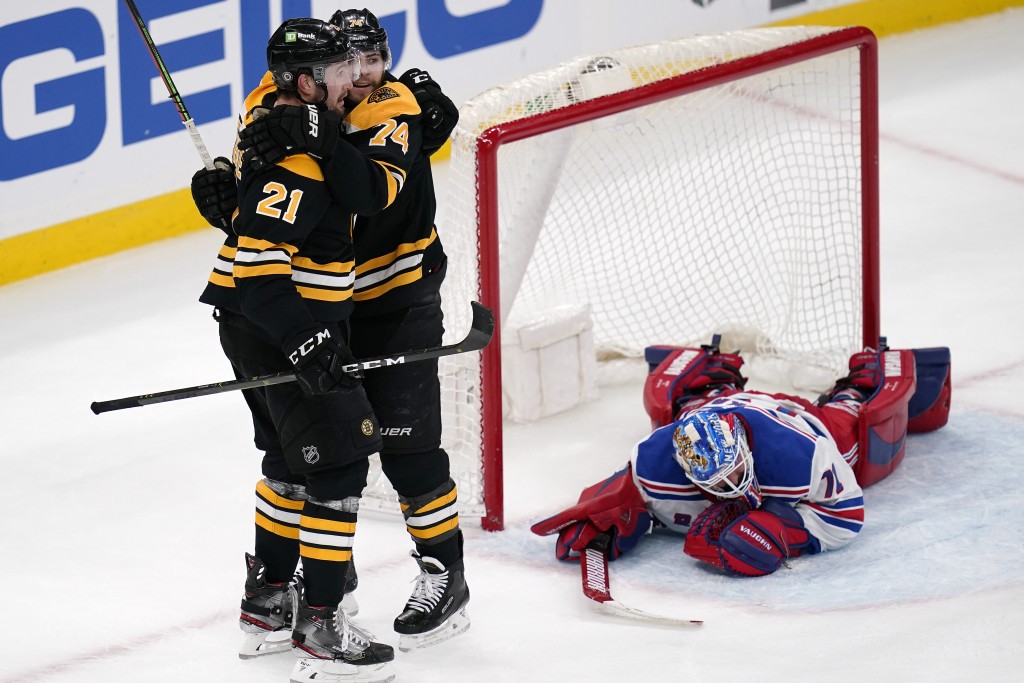 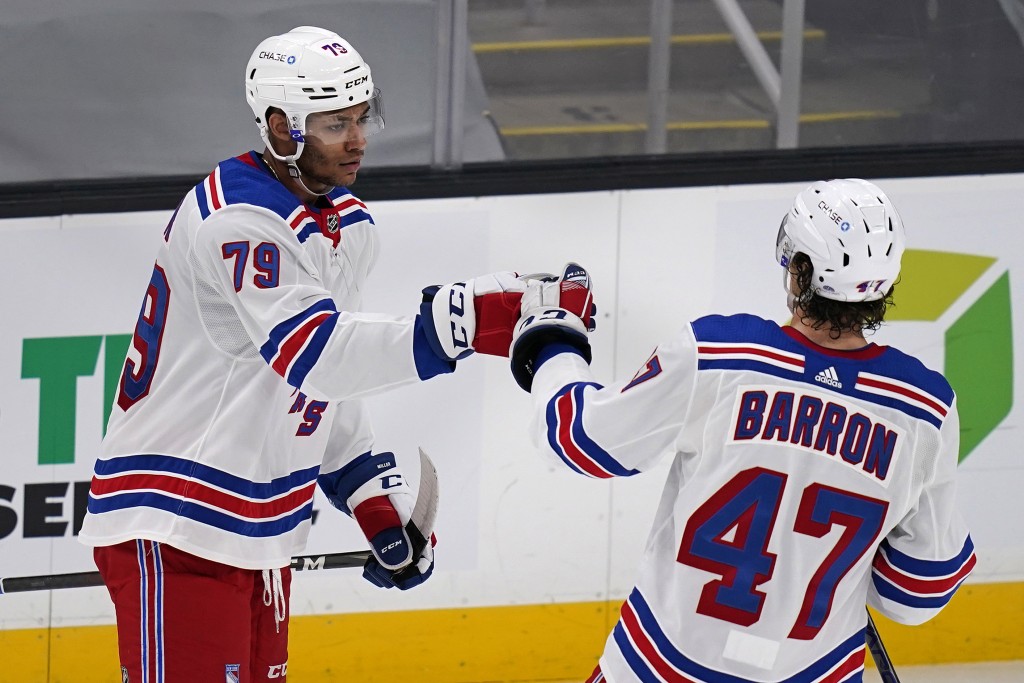 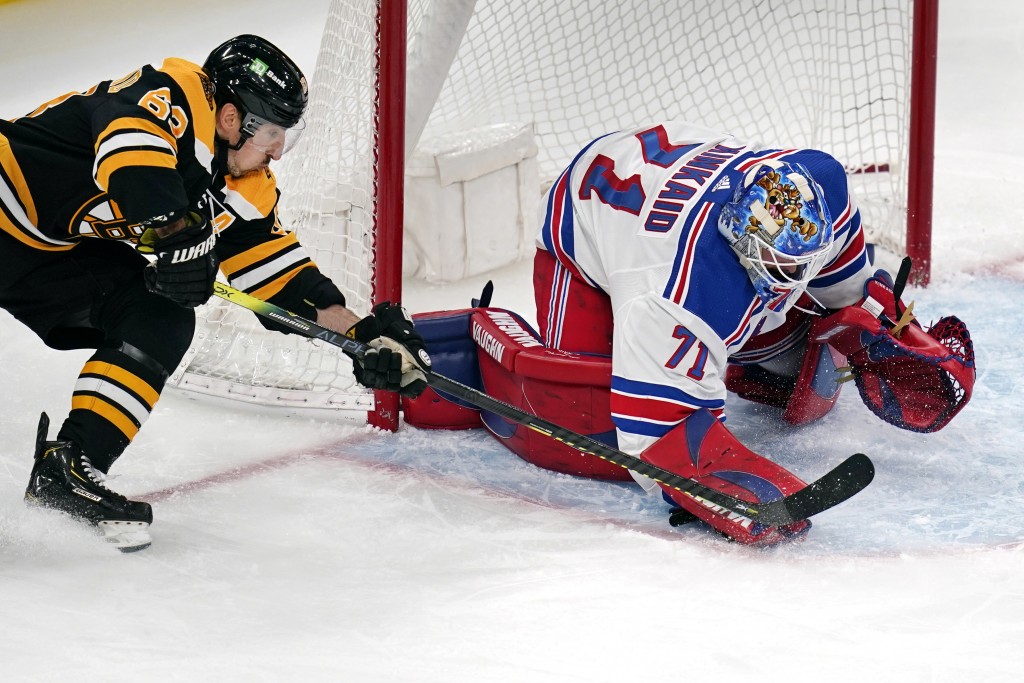 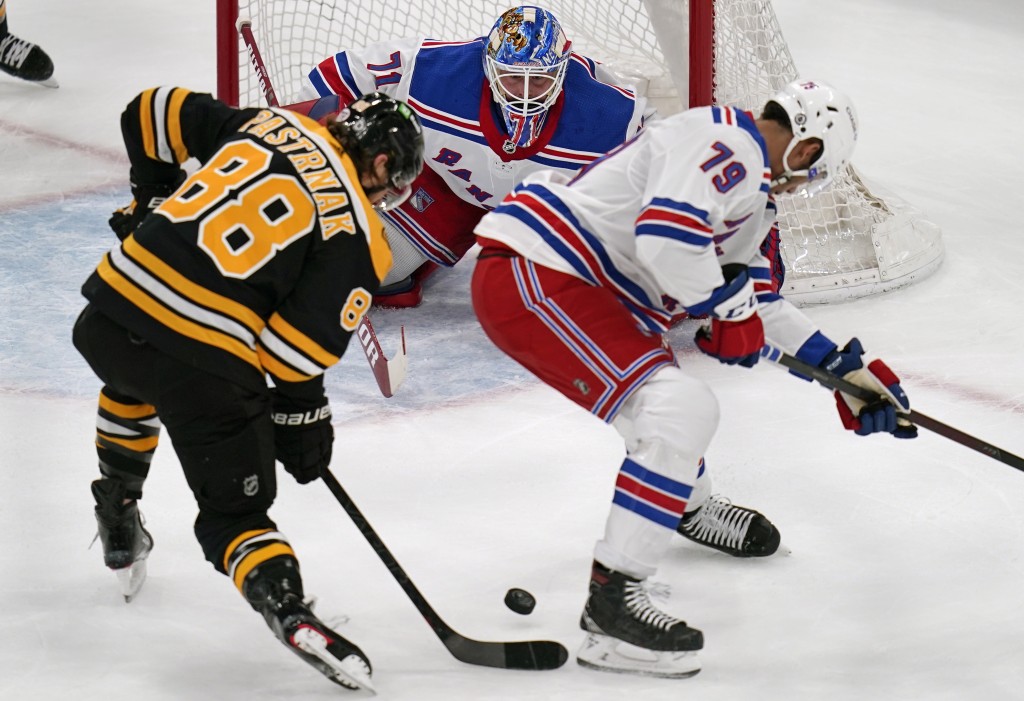 BOSTON (AP) — Mika Zibanejad scored two of New York’s four third-period goals, and the Rangers ended their season with a 5-4 victory over the Boston Bruins on Saturday to halt a five-game losing streak.

Alexis Lafrenière and Vitali Kravtsov also scored in a wild third when the Rangers turned a 2-1 deficit to a 4-2 edge. K’Andre Miller added a goal for the Rangers, and Keith Kinkaid made 28 saves before leaving with an injury midway into the third. Ignor Shesterkin finished up in net with seven saves.

New York, which was eliminated from the playoffs, will finish in fifth in the NHL’s East division.

David Pastrnak scored his 200th career goal, Brad Marchand had his team-leading 28th, and Patrice Bergeron and Nick Ritchie also scored for the Bruins, who had earned at least a point in their previous six games (5-0-1). Tuukka Rask stopped 18 shots.

Boston can clinch third in the East if the New York Islanders lose Saturday night or by collecting two points in its final two games. The Bruins host the Islanders on Monday night.

Zibanejad tied it 2-2 with a wrister from the slot 5:01 after Pastrnak scored on a one-timer from the right circle 21 seconds into the third.

Lafrenière cut in alone and slipped a backhander over Rask at 7:26. Kravtsov then one-timed in a shot in at 9:36.

Marchand’s power-play goal sliced it to 4-3 with 5:52 left in the third, but Zibanejad’s second of the game and 200th of his career made it 5-3. Bergeron scored with Rask pulled for an extra skater, but the Rangers held on.

Ritchie, voted the club’s Seventh Player Award by the fans for someone who “exceeded expectations,” tied it after Miller had moved New York ahead 6:21 into the second.

Kinkaid was solid through two periods, stopping 27 shots — 18 in the second — and even had a little luck when Pastrnak fired a shot off the crossbar.

A WEEK TO FORGET

The Rangers closed their final week of the season with the firing of the team’s president and general manager, a night filled with fights against Washington in response to the Capitals’ Tom Wilson not being suspended and a $250,000 fine from the NHL for the club’s public criticism of the league’s head of player safety George Parros about Wilson’s punishment of only a fine for his actions during a melee on Monday.

The Bruins will have to decide who backs up No. 1 goalie Rask in the playoffs.

Rookie Jeremy Swayman has been outstanding, going 7-2 with a 1.44 goals-against-average in nine starts, and veteran Jarsolav Halak has playoff experience.

“It’s Tuukka first, we know that,” coach Bruce Cassidy said before the game. “Certainly, Swayman has done everything we’ve asked. A good problem to have when you have three capable goaltenders.”

NOTES: Pastrnak’s goal was his 20th, the fifth straight season he’s reached that mark. … Rangers forward Pavel Buchnevich returned to the lineup after serving a one-game suspension for high-sticking Washington’s Anthony Mantha on Wednesday. … Cassidy said forward Ondrej Kase, out since Jan. 16 with an upper-body injury, had a good practice Friday with “a little more exertion” and that it “bodes well” for him possibly playing in one of the final two games.

Bruins: Host the Islanders on Monday in their penultimate regular-season game.