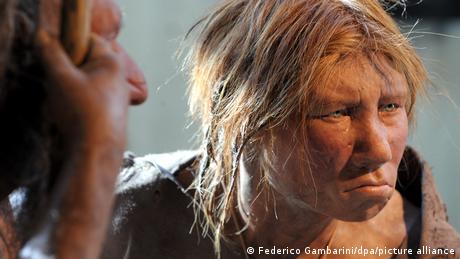 Archaeologists found the fossil remains of nine Neanderthal men in a cave near Rome, Italy's Culture Ministry said on Saturday.

Archeologists made the major discovery in Grotta Guattari — prehistoric caves found more than 80 years ago — situated about 100 meters (328 feet) from the coast of the Tyrrhenian Sea in San Felice Circeo in Italy's Lazio region.

"Together with two others found in the past on the site, they bring the total number of individuals present in the Guattari Cave to 11, confirming it as one of the most significant sites in the world for the history of Neanderthal man," the ministry said.

Culture Minister Dario Franceschini praised the find as "an extraordinary discovery which the whole world will be talking about."

What else was found?

Archaeologists began conducting new research into the Guattari Cave in October 2019. The cave was initially found by accident by a group of workers in 1939.

Paleontologist Albert Carlo Blanc discovered a well-preserved Neanderthal skull shortly afterward. The cave had been closed off by an ancient landslide.

Excavations also uncovered bones, craniums and other body parts at the site, as well animal remains such as the aurochs — an extinct bovine — and elephant, rhinoceros, giant deer, cave bears, wild horses and hyenas.

"Many of the bones found show clear signs of gnawing," the ministry statement said.

Neanderthals are the closest known ancient relatives of humans.

In 2016, scientists found that Neanderthals from Siberia's Altai mountains may have shared 1-7% of their genetics with the ancestors of modern humans.

"Neanderthal man is a fundamental stage in human evolution, representing the apex of a species and the first human society we can talk about," said local director of anthropology Mario Rubini.

Rubini said the discovery of the Neanderthal remains near Rome will shed an "important light on the history of the peopling of Italy."

Neanderthals died out around 40,000 years ago. Scientists have suggested that factors including increased competition from modern humans as well as climate change which killed them off.