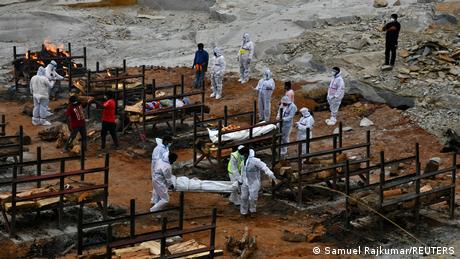 India registered 4,187 deaths linked to COVID and 401,078 new cases in the past 24 hours, the government said on Saturday.

This is the fourth time the country recorded over 400,000 daily new infections in a week, taking its caseload to nearly 21.9 million.

While the situation in major cities New Delhi and Mumbai appears to be stabilizing, with extra supplies of oxygen being sent and new hospital beds opened up, the virus is now also spreading fast in southern states and rural areas.

The states of Tamil Nadu, Kerala and Karnataka have ordered total lockdowns in a bid to break the chain of transmission and halt the spread of the virus.

The second virus wave in India has brought the country's healthcare system to the brink of collapse, with a scarcity of hospital beds, medical oxygen and essential medicines.

Morgues and crematoriums have struggled to handle the number of dead and makeshift funeral pyres burn in parks and car parks.

Experts say India may not hit a peak in its current surge until the end of May.

Here's a roundup of some of the other major COVID-related stories around the world on Saturday.

Sri Lanka approved BioNTech-Pfizer's COVID-19 vaccine for emergency use, as the island nation battles a third wave of the virus, while suffering a restricted supply of vaccines from neighboring India.

Sri Lanka is the first country in South Asia to approve the BioNTech-Pfizer vaccine. It has also approved Russia's Sputnik and China's Sinopharm vaccines for emergency use.

The country reported 1,914 new cases and 19 deaths in the past 24 hours, and its total number of active cases is higher than any point since the pandemic began.

Pakistan began a nine-day shutdown affecting travel and tourist hotspots in a bid to prevent a surge in COVID cases during the Muslim holiday of Eid al-Fitr.

Businesses, hotels and restaurants, as well as markets and parks, will be closed, while public transport between provinces and within cities has been halted.

The military has been mobilized to monitor the restrictions.

Mosques, however, which have been packed each night throughout Ramadan — with few people wearing masks — will remain open. Authorities fear curbs on places of worship could ignite confrontation in the deeply conservative Islamic republic.

After over a month with no local infections, Vietnam has recorded 176 confirmed coronavirus cases from several outbreaks that have spread to 19 provinces during the past 10 days, the Health Ministry said.

In the capital Hanoi, authorities urged people to refrain from gathering while city parks and food stalls were closed.

Since the start of the pandemic, Vietnam has recorded 3,137 confirmed cases with 35 deaths.

Thailand expects to offer the Moderna vaccine to most of its population soon as it steps up the rollout of its COVID-19 vaccination campaign, a health official said on Saturday.

Moderna last month applied for vaccine registration in Thailand, which should be approved soon, said Withoon Danwiboon, head of the Government Pharmaceutical Organization.

Meanwhile, the nation's capital Bangkok has announced that it will extend COVID-related restrictions that were due to end this weekend until May 17, due to the surge in new infections in recent days.

The measures include limiting restaurants to takeaway meals, closing 35 types of venues including bars, gyms, stadiums and boxing rings, and limiting the operating hours of other businesses.

Bangkok has recorded more than 500 new cases every day since the beginning of this month, with no sign of decline, said a spokesperson for the government's Center for COVID-19 Situation Administration.

Germany has recorded 15,685 more cases, taking the overall number of infections to 3,507,673, data from the Robert Koch Institute (RKI) for infectious diseases showed on Saturday. The reported death toll rose by 238 to 84,648, the tally showed.

Health Minister Jens Spahn said he is confident that travel within the European Union would be possible by summer.

The president of the EU's European Council, Charles Michel, said the bloc is ready to discuss a US proposal for lifting patents on COVID vaccines once a concrete offer has been made.

"We are ready to engage on this topic, as soon as a concrete proposal would be put on the table," Michel said, as EU leaders discussed the issue in Porto.

But Michel, who represents the EU's 27 national leaders, cautioned that the bloc has doubts that the idea "in the short term, that it's the magic bullet."

The UK will be free of coronavirus by August, the government's departing vaccine taskforce chief Clive Dix said.

"Sometime in August, we will have no circulating virus in the UK," Dix told the Daily Telegraph, adding that he believed the vaccine booster program could be pushed back to early 2022.

The government is looking at which COVID-19 vaccines would offer the best booster shot for vulnerable people later this year.

The UK has administered over 51 million vaccines and has been the second quickest country to give a first dose to at least half its adult population.

Brazil expects to sign a new deal next week with Pfizer Inc for 100 million more COVID-19 vaccine doses, a Health Ministry official said. It would double the US drugmaker's delivery to the Latin American country this year.

Meanwhile, authorities recorded 78,886 new cases in the past 24 hours and 2,165 fatalities, the Health Ministry said.

That raised the total number of confirmed cases in Latin America's largest country to almost 15.1 million, and the official death toll to 419,114.

Residents of Mexico City will be able to attend open-air concerts and sporting events at limited capacities beginning next week after a sustained drop in coronavirus infections, Mayor Claudia Sheinbaum said.

The new measures, set to take effect on May 10, will include expanded access to movie theaters, banks and hotel-based conventions.

The relaxation of restrictions follows a months-long decline in the number of infections in the city and its sprawling metropolitan areas that house about 22 million people.