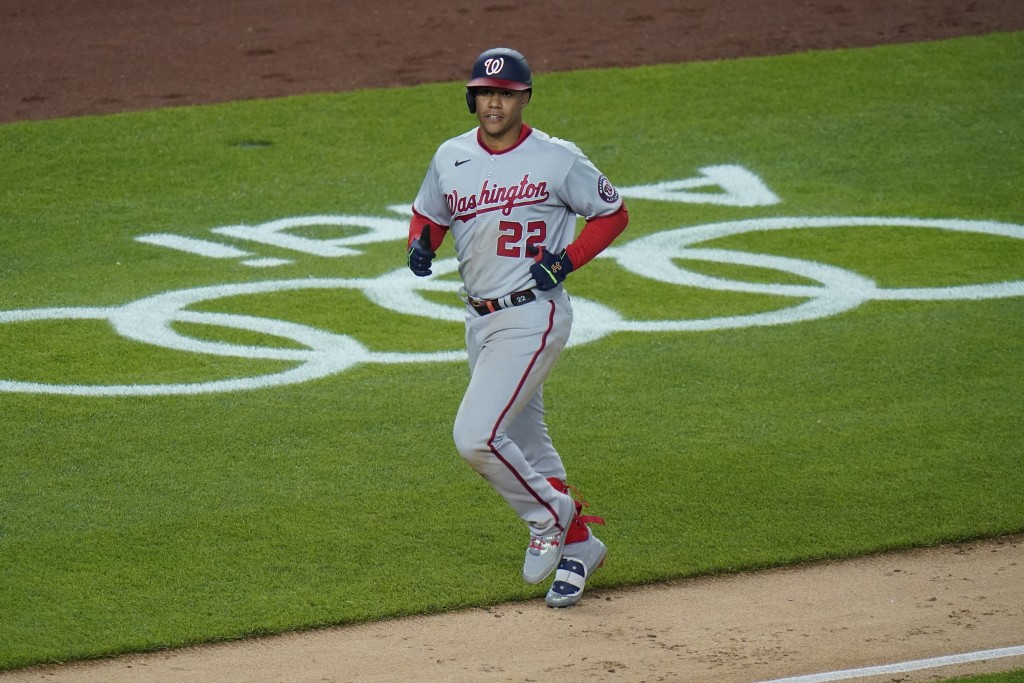 NEW YORK (AP) — Washington burst ahead in a six-run eighth inning that included three errors and Josh Harrison’s three-run homer, and the Nationals stopped a three-game skid by beating the New York Yankees 11-4.

With the score tied at 3 on a chilly night, Yadiel Hernández lined a single against Jonathan Loaisiga (3-2) that right fielder Aaron Judge allowed to bounced off his glove for his first error since Sept. 30, 2018. Third baseman DJ LeMahieu made a throwing error on Victor Robles' sacrifice, Trea Turner hit a go-ahead single and Harrison homered for a 7-3 lead.

Kyle Schwarber hit a run-scoring single off Luis Cessa and shortstop Gleyber Torres allowed Yan Gomes’ grounder to bounced past his glove for a run-scoring error.

Kyle Finnegan (2-0) pitched a scoreless seventh for the win.

ATLANTA (AP) — Odúbel Herrera hit a three-run homer in Philadelphia’s six-run first inning and the Phillies set season highs for runs and hits (16) as they won their fifth straight.

J.T. Realmuto had three hits, including a two-run homer, and Jean Segura drove in two runs with four hits.

Attendance was 38,952 as the Braves allowed 100% capacity for the first time since before the coronavirus pandemic.

Charlie Morton (2-2) got just two outs but all six runs he allowed were unearned due to a passed ball by rookie William Contreras that allowed Rhys Hoskins to reach on a strikeout.

Miguel Rojas had two hits and scored three times for the Marlins, who have won four straight.

Milwaukee lost its sixth straight and fell to 0-5 on its seven-game trip.

Trevor Rogers (4-2) gave up one run and four hits in five innings.

Milwaukee starter Brent Suter (2-2) left because of a cramp in his right calf after surrendering Garrett Cooper’s one-out single in the third.

Joc Pederson had three hits and an RBI for Chicago, which has won four straight.

Pittsburgh has lost seven of eight and is last in the NL Central at 13-18.