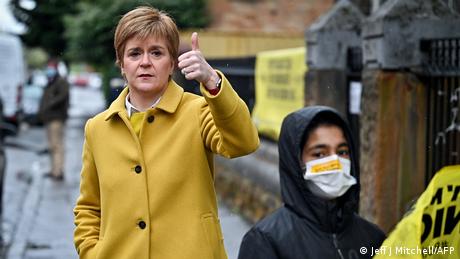 Scottish First Minister Nicola Sturgeon's hopes of holding a second independence referendum were on a knife-edge on Saturday as initial election results showed her SNP party had failed to gain an overall majority in Scotland's parliament.

Sturgeon said she would seek to hold a new vote on splitting from the rest of the United Kingdom by the end of 2023 if there is a pro-independence majority returned to the devolved 129-seat parliament.

But it was unclear whether the Scottish National Party had picked up enough seats to govern alone.

According to the latest tally, the SNP currently has 39 seats, the pro-EU centrist Liberal Democrats four, the Conservative Party two with Labour winning just one so far.

More results will be declared later on Saturday.

Polls predicted that the Scottish National Party would form the next devolved government, but with the support of smaller parties.

Sturgeon "happy" with results so far

"I'm extremely happy that the SNP appears to be on course for a fourth consecutive election victory," Sturgeon said

"And if that is indeed the outcome of this election, I pledge today to get back to work immediately to continue to steer this country through the crisis of COVID, to lead this country into recovery from COVID.

"And then, when the time is right, to offer this country the choice of a better future."

Scotland's parliamentary poll was part of a series of key votes across the UK in what was dubbed 'Super Thursday' with voters in England and Wales casting ballots in local elections.

British Prime Minister Boris Johnson, who has the power to approve or reject another referendum, put his government on a collision course with the Scottish National Party.

"I don't think people want much more constitutional wrangling right now," he told reporters, echoing previous comments that the 2014 referendum vote was supposed to be a "once in a generation" event.

When Scottish voters were last asked the question, just over 55% of those who cast ballots rejected independence.

Speaking later in an interview with British broadcaster ITV News, First Minister Nicola Sturgeon warned that her party may press ahead with a fresh independence referendum if the UK government fails to support one.

"If he [Boris Johnson] wanted to stop that it would be the case that he would have to go to the Supreme Court to challenge it - and that would be his decision not mine," she said.