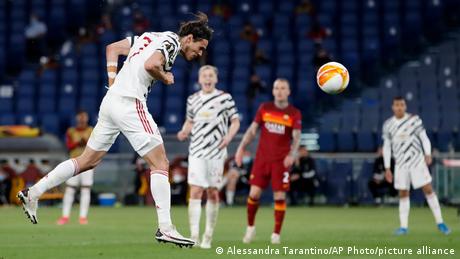 Manchester United advanced to the Europa League final on Thursday — winning 8-5 on aggregate despite losing 3-2 to Roma at the Stadio Olimpico.

The English side will play Villarreal in the final on May 26 in Gdansk, rather than their Premier League rivals, Arsenal.

What happened during the United-Roma game?

United's Edinson Cavani opened the scoring after 39 minutes, but Roma found the net twice in the space of three second-half minutes.

Cavani nodded United level, but a deflection off his teammate Alex Telles meant an own goal secured the win on the night for Roma. However, it was United who were left celebrating at the final whistle — having won 6-2 at Old Trafford a week earlier.

Spain's Villarreal reached the final after a goalless away leg in London gave them a 2-1 aggregate triumph.

The visiting side put in a disciplined display and rode their luck at times with Pierre-Emerick Aubameyang twice hitting the post for Arsenal.