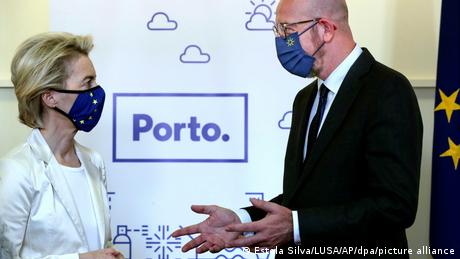 The European Union heads of state and government met in the Portuguese city of Porto on Friday to discuss the bloc's social affairs strategy for the next decade.

"The (pandemic) recovery is still in an early stage,'' EU Commission President Ursula von der Leyen said in her opening speech at the high-level conference.

This "very important social summit comes at the absolutely right time, we've been through a very tough year," she added. Social challenges including work, training and fighting poverty need to be an "absolute priority" and show that "Europe can deliver."

What was said during the meeting?

On the first day of the summit, EU leaders delved into talks concerning a US proposal for a waiver on intellectual property protections for COVID-19 vaccines.

The EU officials stressed that export bans and production capacity are the more pressing issues which need to be addressed before patent waivers are considered.

The bloc was initially opposed to a waiver, arguing that it would undermine incentives for companies to produce jabs in record time in the future.

But after the United States announced backing a COVID-19 vaccine patent waiver, several EU member states voiced their tentative support to at least discussing the idea.

Why is the EU holding the Porto summit?

The meeting comes amid a crisis triggered by the coronavirus pandemic, leaving thousands of people unemployed.

"As vaccination is well on track, as we return to our normal lives, it’s time to mend our social fabric, damaged by the crisis," EU Commission President Ursula von der Leyen said on Twitter.

The leaders are set to discuss a non-binding proposal by the EU executive to get states to target an employment rate to 78% by 2030 and reduce the number of people at risk of poverty by 15 million.

What else is on the agenda?

On Saturday, the summit is scheduled to welcome Indian Prime Minister Narendra Modi via video conference for an EU-India summit.

The EU has also said it is determined to encourage investment in scientific research.

As the leaders gathered in person for the first time this year, those attending the summit had to show negative COVID-19 tests, and social distancing rules remained in place.

What is the expected outcome?

But several EU officials believe hopes for a strong declaration might be too optimistic, with social issues being mainly handled on a national rather than EU level.

The conference is also expected to renew commitment to implementing the European Pillar of Social Rights and reaffirm the 2017 Gothenburg summit resolutions.

But four years later, "steps towards practical implementation [of the Gothenburg resolution] are yet to be taken," head of the German Trade Union Federation Reiner Hoffmann told AFP news agency.

Ahead of the Porto summit, 11 EU governments issued a joint statement warning against too far-reaching labor market and social policy interventions.

The four states had pressured to curb increases in the EU budget and reduce the amount of joint debt used to finance a pandemic recovery fund.

It's questionable whether countries will feel able to make bold commitments against austerity after two years of reduced economic output and increased state borrowing to combat the pandemic.