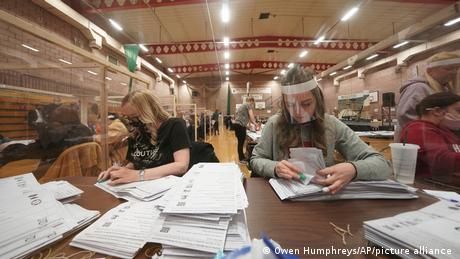 Britain's ruling Conservative Party has snatched a historically left-wing seat from the opposition Labour party in a tense by-election in England.

The northern English town of Hartlepool — a strongly pro-Brexit constituency, and one of the most impoverished towns in the country — has never voted Conservative since its creation in 1974.

Mortimer described it as a "truly historic" result.

"It's a very encouraging set of results so far," he told reporters. "I think that's really because we have been focusing, as a government, on our priorities, the people's priorities, and bouncing back from the pandemic as much as we can."

Election analysts say it is the biggest swing of votes to the ruling party at a by-election since the World War II.

Hartlepool's Labour incumbent had quit over allegations of sexual harassment, triggering the by-election.

What are the current elections in the UK?

Britain will see results from an array of elections in the coming days. On Thursday, some 50 million voters were eligible to take part in scores of elections.

Results will cover local and mayoral elections across England and votes for the Scottish and Welsh parliaments.

According to early results, Conservatives have been performing strongly beyond Hartlepool in the northeast, as well as in central and southeast England.

But the Labour Party is expected have some results to cheer, with Sadiq Khan and Andy Burnham poised to win second terms as the mayors of London and Manchester.

The election result from Scotland's vote could have the biggest UK-wide implications.

The Scottish National Party (SNP) is hoping to retain its majority in the Holyrood assembly to put more pressure on Johnson's government to agree to an independence referendum. However, the SNP looks set to lose ground, albeit still with a chance of retaining a majority.