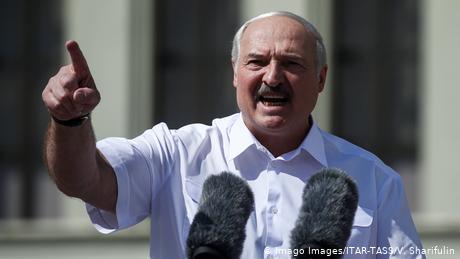 Belarus President Alexander Lukashenko has hit back at a criminal complaint filed against him in a German court.

Lukashenko said Friday that the "heirs of fascism" were in no position to judge him, in reference to Germany's Nazi past.

"I do not reproach them. But they are the heirs of the generations who unleashed that war," Lukashenko said, referring to World War II. "It's a dumb move."

What are the allegations against Lukashenko?

Four German lawyers submitted a complaint against Lukashenko and the security apparatus on behalf of 10 Belarusian plaintiffs on Wednesday.

The lawyers sent the complaint to Germany's Federal Public Prosecutor's Office in the southwestern city of Karlsruhe, home to the country's top courts.

The lawyers alleged that their clients were victims of crimes against humanity, including torture.

This was alleged to have taken place amid the Belarusian government's crackdown on nationwide anti-government protests in 2020.

The plaintiffs suffered physical abuse, deprivation of food and sleep, humiliation and degradation, according to the lawyers.

The allegations corroborate with reports from the United Nations Human Rights Council. It said it received numerous accounts of torture, abductions, arbitrary expulsions and disappearances in Belarus during the protests.

But why in German courts?

Under the principle of universal jurisdiction, Germany can, in theory, prosecute crimes against humanity regardless of where they were committed or the nationalities of the victims and perpetrators.

The new rules came into force several years ago, but the first case came to a conclusion this year.

In April, it saw members of Syrian leader Bashar Assad's security apparatus sentenced to jail for torture committed in Damascus.

More such cases have been filed in the aftermath of the groundbreaking verdict.

Who is 'Europe's last dictator'?

Lukashenko has been president of the landlocked northeastern European country since the 1990s. He has retained Soviet-era policies such as continued state ownership of key industries.

His authoritarian leadership has earned him the title "Europe's last dictator."

Neither Lukashenko nor members of Belarusian security forces are likely to face legal consequences for their actions during the protests in Belarus.