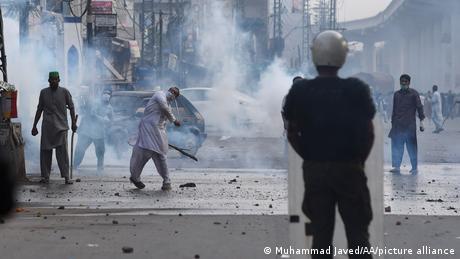 Prime Minister Imran Khan finds himself in a difficult situation after the EU Parliament passed a unanimous resolution last week to review its preferential trade agreement with Pakistan over the country's controversial blasphemy law.

One the one hand, the EU's GSP+ status is economically beneficial for the country, on the other, blasphemy is an extremely sensitive issue — both religiously and politically.

The EU resolution expressed alarm over a spike in blasphemy cases and human rights abuses in Pakistan. It also showed concern over rising anti-French sentiment in the Muslim-majority South Asian nation over President Emmanuel Macron's actions against Islamic extremism in his country.

"The immediate initiative was connected to the case of a Christian couple. They have been languishing in a Pakistani jail because they have been accused of blasphemy," Reinhard Bütikofer, a German member of European Parliament, told DW. "But obviously, this is just one case among many. It may not need to be a Christian couple; [people of] other religions also suffer under the strict control of, what we consider, a medieval blasphemy law."

"It is a clear political signal that the GSP+ status is not a one-way street. It is premised on the understanding that the partnering country would stick to some human rights, transparency, accountability and other criteria," Bütikofer said, adding that the GSP+ is a major economic support for Pakistan because it allows an EU partner country to send 66% of its exports to the European Union free of any tariff. "I think it fair to insist that the conditionality that applies should be taken seriously."

Pakistan's right-wing groups have strongly criticized the EU Parliament's resolution and vowed to safeguard the country's blasphemy laws. They said the West would not be allowed to insult Islam or its prophet, Muhammad.

Earlier this week, PM Khan presided over a Cabinet meeting to discuss the implications of the the EU resolution. Instead of showing pragmatism over the issue, Khan reportedly decided to not compromise on the blasphemy law. His ministers also asserted that the blasphemy laws would remain untouched.

However, the government said it would introduce legislation to address the other human rights concerns in the resolution.

Blasphemy is a sensitive topic in the Islamic Republic of Pakistan, where around 97% of the 180 million inhabitants are Muslim. Hundreds of victims of blasphemy charges have been languishing in Pakistani jails for years. People have been lynched by angry mobs, or assassinated, on allegations of insulting Islam or its Prophet Muhammad.

In 1947, Pakistan inherited the blasphemy laws from its British colonial rulers who had made it a criminal offense to commit "deliberate and malicious acts intended to outrage religious feelings of any class by insulting its religious belief."

In the later decades, the Islamic military dictator General Zia-ul-Haq introduced extensions of the laws between 1977 and 1988, including life imprisonment for those defiling or desecrating the Holy Quran. Later, the death penalty was declared mandatory for anyone blaspheming against the Prophet Muhammad.

While the government is reluctant to address the EU's concerns, Pakistan's business community is wary of the possibility of the GSP+ withdrawal.

Ahmed Chinoy, the director of the Pakistan Stock Exchange and former chairman the Pakistan Cloth Merchants Association, says that not addressing the EU's reservations could damage the country's economy.

"Pakistani manufacturers will be left with no option but to export textile and garments goods at a much cheaper rate, which means they will have to lay off their workers and reduce their wages substantially. The government needs to sort out this issue instead of resorting to emotional rhetoric," Chinoy told DW.

Qaiser Ahmed Shaikh, former president of the Karachi Chamber Commerce and Industries, says the GSP+ status has greatly benefited Pakistan. "Before Pakistan was granted this status, we had around $6 billion (€4.94 billion) exports to the EU. It increased to $8 billion dollar as a result of the EU's preferential trade agreement," Sheikh told DW, adding that $2 billion are now at stake.

"More than 18 million Pakistanis have lost their jobs because of the COVID pandemic" and more could be unemployed as a result of the GSP+ withdrawal, he said.

Nasir Mansoor, a labor rights activist, told DW the GSP+ status added 1.6 million more jobs to Pakistan's economy, and if it is withdrawn, around a million people will lose their jobs.

Aisha Ghaus Pasha, an economist and a former lawmaker, says that if the EU revokes Pakistan's GSP+ status, it will put the country in a very challenging position.

Activists say it is high time the state stopped appeasing Islamists and focused on economic development.

"The government can easily address the EU concerns if it wants," said Mansoor.