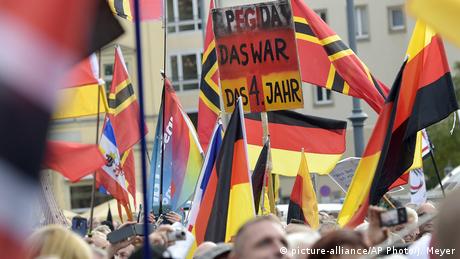 Intelligence services in Saxony, Germany said Friday they would be increasing their surveillance of anti-Islam movement Pegida as the group had become "extremist" and "anti-constitutional."

Campaigning against what the protest movement describes as the "Islamization of the West," Pegida has developed "an increasingly right-wing extremist orientation," the Saxony State Office for the Protection of the Constitution (LfV) said in a statement.

He added that "all people and activities" within the group would now be monitored more closely, though this would not include those merely taking part in peaceful demonstrations.

Pegida and the 2015 refugee crisis

Pegida was founded in October 2014 with xenophobic protests every Monday evening which gathered momentum during the refugee crisis of 2015. At the time, Germany became deeply divided over Chancellor Angela Merkel's decision to accept hundreds of thousands of asylum seekers.

The Saxony-based movement's popularity coincided with the rise of the far-right AfD party, which entered Germany's national Parliament for the first time in 2017 on an anti-immigration platform.

Pegida has previously been declared extremist and put under observation by intelligence services in other German states such as Bavaria.

Meanwhile, Lutz Bachmann, who founded the group and remains one if its most prominent members, has faced multiple convictions for sedition.

Germany's domestic spy agencies keep a watchful eye on a range of individuals and groups from across the political spectrum.

In a move that was later blocked by the country's Constitutional Court, Germany's State Offices for the Protection of the Constitution (BfV) said in March that it was placing the entire AfD party under surveillance for posing a threat to democracy.

Last month, the BfV said it would also be paying close attention to members of the "Querdenker" (Lateral Thinkers) movement, which has emerged as a prominent voice against coronavirus curbs, and an active promoter of conspiracy theories that deny facts about the pandemic.