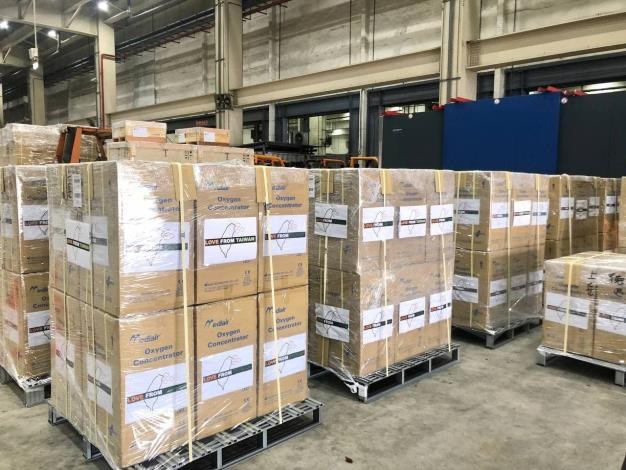 TAIPEI (Taiwan News) — In response to calls for help from India due to the massive surge in coronavirus cases in that country, the Taiwanese government flew out its first delivery of medical aid on Sunday (May 2) — with speedy assistance from the National Cheng Kung University Hospital (NCKUH).

In April, India began experiencing a catastrophic second wave of COVID-19 infections, and there was a nationwide shortage of oxygen concentrators. As a result, Indian child climate activist Licypriya Kangujam reached out to Taiwan's Ministry of Foreign Affairs for assistance.

The Taiwanese government sought help from NCKUH, the largest healthcare center in Tainan, to speed up the humanitarian relief effort. In less than a week, the hospital tapped into its professional network to help the government identify readily available oxygen concentrators from its stockpile to support India's COVID-19 relief efforts.

The first batch of medical supplies, including 150 oxygen concentrators and 500 oxygen cylinders, arrived at India's Delhi Airport Sunday morning via a special cargo flight. Gourang Das, director-general of the India Taipei Association, expressed his gratitude to Taiwan for its friendship and assistance.

Since 2018, NCKUH has worked closely with its counterparts at several Indian hospitals, the Indian government, as well as both government and non-governmental organizations. It has also taken part in hundreds of professional meetings and events, including the Taiwan Expo in India run by the Taiwan External Trade Development Council (TAITRA).

NCKUH has also invited experts and scholars from the World Health Organization Southeast Asia Regional Office and the United Nations Children’s Fund (UNICEF) to Taiwan to give speeches. The hospital has inked memorandums of understanding with several Indian organizations to promote exchanges in the fight against COVID and to expand joint healthcare ventures in India.

The hospital has been an active player in promoting health and collaboration between the two countries for many years. In 2019, it hosted an international forum in Delhi to introduce Taiwan's healthcare system to its Indian counterparts. It also led a trade team of Taiwanese manufacturers to Medical Fair India, built a picture archiving and communication system for the Indian Cygnus Hospital Rama Viharru Branch, and initiated several business meetups between Indian health centers and Taiwan manufacturers.

Since the outbreak of COVID, business has shifted from offline to online, which has seen Taiwanese manufacturers secure orders for electronic thermometers, forehead thermometers, rapid test kits, respirators, and medical gloves. It is noteworthy that a video conference cohosted by the hospital contributed to a combined US$2 million's worth of deals on protective suits and COVID-19 tests.

New coronavirus cases and deaths in India hit another record daily high on Thursday (May 6), with over 412,000 new infections and 3,980 fatalities being reported, according to local media.