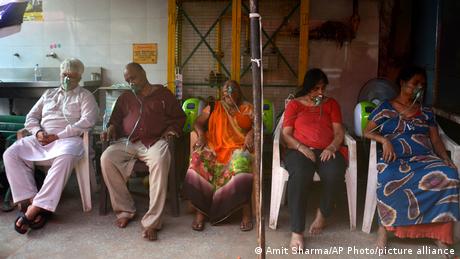 Ashok Jain (name changed) tested positive for COVID-19 on April 30. When his oxygen levels fell dangerously low, his family sent him to a small hospital in Indore, in the west-central state of Madhya Pradesh. On May 2, he called up his son-in-law and breathed his last words: "Please get me out of here, otherwise I'll die."

Jain died the next day.

Prajakta (name changed), a relative of Jain's, blames a lack of investment in health care as a key reason why she believes India won't be able to contain rising deaths from COVID-19 anytime soon.

"India has historically underinvested in its health care system, which has ultimately led to the collapse of the system today," Prajakta told DW.

He claimed that some hospitals admit patients while knowing full well they lack the facilities to treat COVID patients.

Unfortunately, Jain's story is not unique. The Indian government has come under severe criticism for its handling of the pandemic, and for not being able to control the spread of infections and deaths arising from a new mutation.

'Containment will be slow and painful'

According to Oommen C. Kurian, the head of the Health Initiative at the Observer Research Foundation (ORF), an Indian think tank, containment will be a "slow, painful process."

"We could have limited the number of deaths from COVID-19 by aggressively vaccinating our elderly population and other high-risk groups. Along with vaccinations, we must now emphasize social distancing and health care triage, if we want to prevent a similar situation in the next wave," he told DW.

The Indian government's principal scientific adviser, K. Vijay Raghavan, has already warned of a third wave, although he has said that the timeline is not yet clear.

Dr. Sharad Kumar (name changed), a doctor based in Bhagalpur, Bihar, believes that the second wave will end in seven to eight weeks.

"If you look at the history of pandemics, there is usually a second and then a third wave," Kumar told DW.

"But COVID is a virus that affects the respiratory system, so it's difficult to contain. If more people get infected, it gives the virus an opportunity to mutate. There is the possibility of reinfection, which we have to prevent if we want to curtail the next wave."

He said one of the solutions is to create micro-containment zones to contain the spread of the virus.

"Ultimately, we have to reduce the load on the health care system by making sure that mild cases don't move to the critical stage. We also need to hold the government accountable for the tender of oxygen plants that were approved last year," said Kumar.

Dr. Vandana Prasad, a pediatrician and public health consultant, believes that although the Indian government had one year to prepare for the current scenario, the most recent budget did not include crucial investment in the health care system.

"When this wave subsides, will we bury our heads in the sand like ostriches and not prepare for another wave?" said Prasad, who was battling COVID at the time of the interview.

"India's health care setup is currently so bad that it can't even handle basic needs. To contain future pandemics or an outbreak of disease, we have to invest majorly in health care, pay our health care workers and give them permanent contracts," Prasad told DW.

She also called for government accountability.

"Above everything, this government has to own up to its lackadaisical response in containing the pandemic if it wants to improve its future response to another wave. For example, the chief minister of Uttar Pradesh is denying that there is lack of oxygen, although people are dying every day without oxygen," she said.

Dr. Antony K.R., a public health consultant based in Kochi, Kerala, believes that India should invest about 5% of its GDP in health care if it wants to prevent another collapse of the health care system.

"India can start a decentralized governing of its public health system up to the district level, in order to prepare for the next wave," he told DW.

Officials should focus on offering technical guidelines at the national level, ensuring an "adequate supply of medical oxygen and medicines," and strengthening the public distribution system "to prevent deaths by starvation and enable a participatory, people-governed system."

"We have to create a conducive working environment for doctors, nurses, and health care staff such as lab technicians and X-ray technicians in the government health institutions, to strengthen our public health system rather than leave the poor at the mercy of the private sector," said K.R.

For example, he said, Kerala has received widespread praise for its successful handling of the pandemic. The state curbed the spread of infection last year through an effective contact-tracing and health surveillance system.

"In Kerala, you can see real-time uploading of surveillance data on portals. The state has also strengthened its public health care system through community participation at the grassroots level, which is something you hardly see in states like Uttar Pradesh."

Some experts believe that India can contain the spread of the virus through consistent and focused government messaging. Critics say that a single speech made by Prime Minister Narendra Modi, urging people to stay home, wasn't enough.

According to Govindrah Ethiraj, the founder of IndiaSpend.com, a public-interest journalism website, one of India's "biggest failures" has been in communication.

"The government should have actively discouraged events like weddings and mass gatherings, including political rallies and religious festivals. It should have also actively advised people against attending superspreader events," Ethiraj told DW.

"If you look at history, the AIDS and polio epidemics were addressed through high quality messaging at the national level. With COVID-19, we have either been weak or inconsistent with the intensity of messaging, including on basic protocols like masking and distancing," he added.