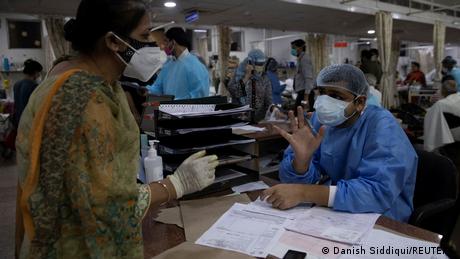 Anamika (name changed) was making one phone call after another in the middle of the night on April 14 to get an ambulance and a hospital bed for her father, who was gasping for breath.

She found out earlier in the evening that both of her parents had tested positive for the coronavirus. But the condition of her father, who is in his early 60s, began deteriorating soon after midnight.

Hospitals in New Delhi have been overwhelmed by COVID-19 patients who require critical care. Many of them have run out of beds, ICU facilities, ventilators, and medical oxygen , and are forced to turn away patients in dire need of hospitalization.

"My father's blood oxygen level dropped dangerously low. I was suddenly in a state of panic," Anamika told DW. "I must have called at least a dozen hospitals that night. I even called the Delhi government's COVID helpline number, but the operator asked me to check their website."

The Delhi state government has a dedicated website that is updated periodically to show a list of hospitals in the city with the number of available beds for COVID-19 in each of them, and the number of hours of oxygen that they have left.

"I contacted several of the hospitals on the website where beds were supposedly available," the 27-year-old said.

"Their phone numbers were either busy, switched off, or out of service. Of the ones that did answer the phone, the operators either told me that the beds were no longer available or transferred the call to a desk that did not answer," Anamika said.

"I even called the ambulance service, where the operator said they would take my father to a government hospital, but warned me that if he was refused admission, they would not bring him back home," she said.

Anamika was among the fortunate ones whose harrowing experience did not end in tragedy. Her father made it through the night and was admitted to a hospital in the neighboring city of Noida the following day.

Many others have found themselves in similar situations during what has been a devastating second wave of coronavirus infections in India.

Those without connections in the right places are left to fend for themselves, helplessly calling overburdened hospitals in the hope of getting emergency medical assistance.

Officials in the Delhi government's health department did not respond to repeated emails and phone calls from DW seeking their comment on the growing demand for a functional, centralized helpline number for people in emergencies.

As a result of the futility of using government helpline numbers, many people have turned to social media with their pleas and messages of SOS requests.

Activists and volunteers on Twitter and Instagram have played a vital role in coordinating relief efforts, helping desperate patients by amplifying their requests, verifying potential leads, and connecting them with donors, hospital staff, and agencies that are in a position to help.

Several NGOs have also stepped in to provide these people with life-saving supplies, including medicines, oxygen cylinders, and even plasma donations from previously infected patients.

But many also feel that these channels are not sustainable in the long run, and have become a reason for the government to shirk its responsibility.

Moreover, access to social media and online resources is not universal even in urban areas like New Delhi. For those without smartphones or regular internet access, the only option is to go to the hospital and wait for their turn.

How can ordinary people respond to emergencies?

A common symptom among people suffering from COVID-19 is breathlessness caused by low blood oxygen levels. According to medical experts, it is what eventually causes patients to die.

Vibhor Bedi, executive director at the East Delhi Medical Centre, suggests that these patients should first contact their doctors — someone they regularly consult, and who is aware of their medical history.

"Hospitalization should be considered only when there is a dire need, particularly when the oxygen saturation goes down to low levels," Bedi told DW.

"In such situations, the patient should be rushed to the emergency ward of the nearest hospital where the attendant can first stabilize the patient's condition," he said, adding that the chances of getting admitted to the hospital are higher at that point, rather than simply calling one hospital after another from home.

"The attendant at the ER can get the patient admitted, at least until she or he is fine," Bedi said.

He also stressed how overworked hospital staff across New Delhi are, as they try to deal with a seemingly endless number of patients.

"If someone calls the hospital, it is quite likely that the entire staff are extremely busy and will not be able to give them proper information at that time," the hospital administrator said.

"For the past three weeks, every staff member is working toward getting enough oxygen for the patients. Adequate supply is just not available," he said.

"I have been working 24-7, and I still get calls at 2 or 3 a.m. from my staff trying to arrange oxygen cylinders."

"We would be able to help patients better if the supply was regular," Bedi said.

Hospitals across major cities in India have been putting out SOS messages of their own, seeking emergency oxygen supplies and warning that the shortage is putting their patients at risk.

Last week, 12 patients, including a doctor, died after a prominent hospital in New Delhi ran out of oxygen. Another 24 people died at a hospital in the southern state of Karnataka due to an oxygen shortage.

India has seen a record surge in coronavirus infections and deaths, reporting over 412,000 new infections and more than 3,900 deaths in the past 24 hours — the highest since the pandemic began.

In total, the South Asian country has reported more than 21 million cases and 230,168 fatalities.

Experts, however, believe the actual figures are much higher than those reported by the government.