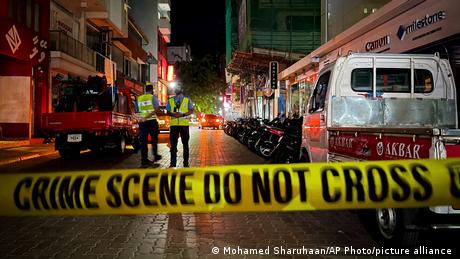 Mohamed Nasheed, the 53-year-old former president of the Indian Ocean island nation of Maldives, narrowly escaped what is suspected to have been an assassination attempt in the capital, Male, on Thursday evening.

Nasheed was injured by a bomb rigged to a motorcycle as he was getting into his car. A Maldives government statement said: "Nasheed escaped an assassination attempt. He is injured but his condition is stable." He is currently being treated at ADK Hospital in Male.

Who is Mohamed Rasheed?

A pro-democracy fighter, Nasheed currently serves as the country's parliamentary speaker, a position he has held since May 2019. Before that, he became the predominantly Sunni Muslim country's first democratically-elected president in 2008, a role he served in until 2012, when he was forced from office in a coup.

Nasheed was subsequently put on trial and sentenced to 13 years in prison on terrorism charges — which were roundly decried by human rights groups as politically motivated. Amnesty International labeled Nasheed a prisoner of conscience.

When Mohamed Nasheed was granted leave from prison for medical treatment he fled the country and went into exile in the UK. He returned to the Maldives in 2018 and was elected speaker of the People's Majlis, the country's second most powerful political position, in 2019.

Maldives Foreign Minister Abdullah Shahid took to Twitter to condemn the incident: "Cowardly attacks like these have no place in our society. My thoughts and prayers are with President Rasheed and others injured in this attack, as well as their families.

The 26-island archipelago of Maldives is mostly known as a luxury vacation spot but it also has a reputation for political turmoil as well as being a haven for Islamist extremists. Former President Abdullah Yameen, for instance, avoided injury when a bomb went off on his speedboat in 2015, and in 2007, Islamist terrorists targeted foreign tourists, injuring 12 in a bombing in the capital.