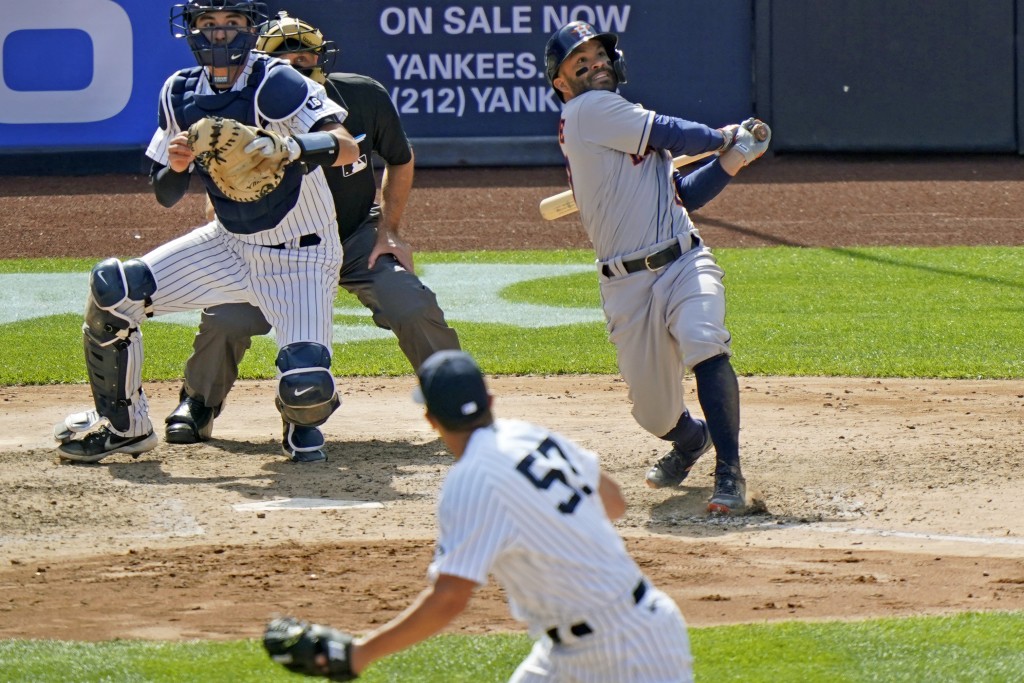 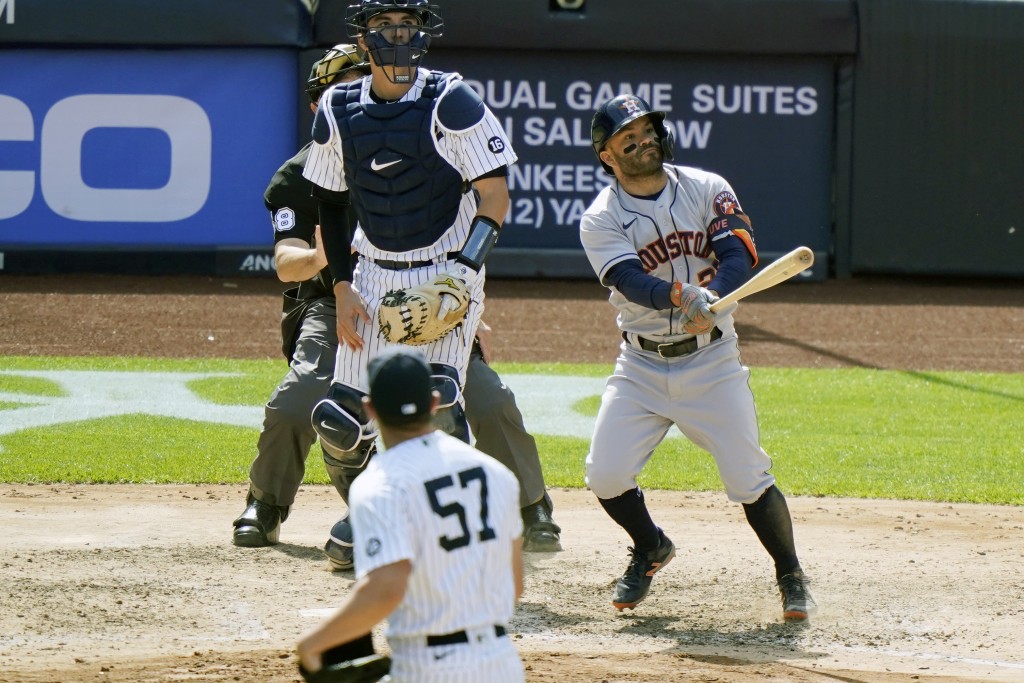 NEW YORK (AP) — José Altuve responded to jeering fans by marking his 31st birthday with a go-ahead, three-run homer off Chad Green in the eighth inning, and the Houston Astros beat the New York Yankees 7-4 on Thursday to avoid a three-game sweep.

Booed throughout the series by fans getting to express their anger directly at the Astros since their cheating scandal en route to the 2017 World Series title was exposed, Altuve turned on a shoulder-high 96 mph 3-2 pitch and drove it over the left-field scoreboard for a 5-3 lead. Gleyber Torres made an incredible, daring dash for the Yankees, scoring from first base on an infield single, but New York’s five-game winning streak ended.

Yordan Álvarez hit a pair of solo homers off Gerrit Cole, who turned a 3-2 lead over to Green (0-3) starting the eighth. After Torres pulled the Yankees within a run in the bottom half, Martín Maldonado hit a two-run homer off Justin Wilson in the ninth, ending a streak of of 75 plate appearances without an RBI.

Cole faced the Astros for the first time since leaving them after the 2019 World Series.

Alex Scrubb (1-0) pitched a perfect seventh, and Ryan Pressly got six outs for his fifth save. Houston climbed back above .500 at 16-15.

BOSTON (AP) — Franchy Cordero came off the bench with three hits to snap an 0-for-25 slump, then brought home the winning run in the eighth with the help of Detroit’s fourth error, and Boston Red Sox held on after blowing three previous leads.

One day after giving up three runs in the 10th, the Red Sox coughed up leads of 4-1, 5-4 and 8-7 before scoring four in the eighth to avoid losing the three-game series to the worst team in the majors.

Matt Andriese (1-1) earned the win despite allowing Detroit to take a 9-8 lead in the eighth; he gave up one run on three hits, a walk and a balk in one inning. Adam Ottavino pitched the ninth for his first save. Alex Lange (0-1) was the loser.

MINNEAPOLIS (AP) — Willie Calhoun singled in the winning run in the 10th inning and Texas dropped Minnesota to 0-7 in extra innings.

Joey Gallo and Jonah Heim homered for the Rangers. They have won three straight — all in the series — and are 4-0 in extra innings.

Brett de Geus and Taylor Hearn (1-1) each pitched two scoreless innings, and Josh Sborz earned his first save with a dominant 10th.

Heim was the automatic runner at second in the 10th against Tyler Duffey (0-1), who let him advance with a wild pitch. Calhoun smacked a single to right field to score him.

Max Kepler led off the game for Minnesota with a homer.

PHILADELPHIA (AP) — Zack Wheeler struck out eight and in a three-hitter and Alex Bohm homered to help Philadelphia beat Milwaukee for a four-game sweep.

The Phillies head out on a nine-game trip in first place (17-15) and as the only team in the NL East with a winning record.

Wheeler (3-2) and Brandon Woodruff (2-1) engaged in a brilliant pitchers’ duel that ended when Bohm connected on a 97 mph fastball in the seventh for his fourth homer of the season. Rhys Hoskins added an RBI double in the eighth.

Walker (2-1) struck out eight and walked none to help the Mets split the four-game series after dropping the first two.

Trevor May struck out two in a perfect eighth and Edwin Díaz pitched around a pair of hits in the ninth for his fourth save. John Gant (2-3) was the loser.

McKenzie (1-1) exited after a single and walk in the sixth. He struggled with his control, walking four and striking out five.

Franmil Reyes hit his eighth home run, and Cesar Hernandez and Rene Rivera each had three hits for Cleveland.