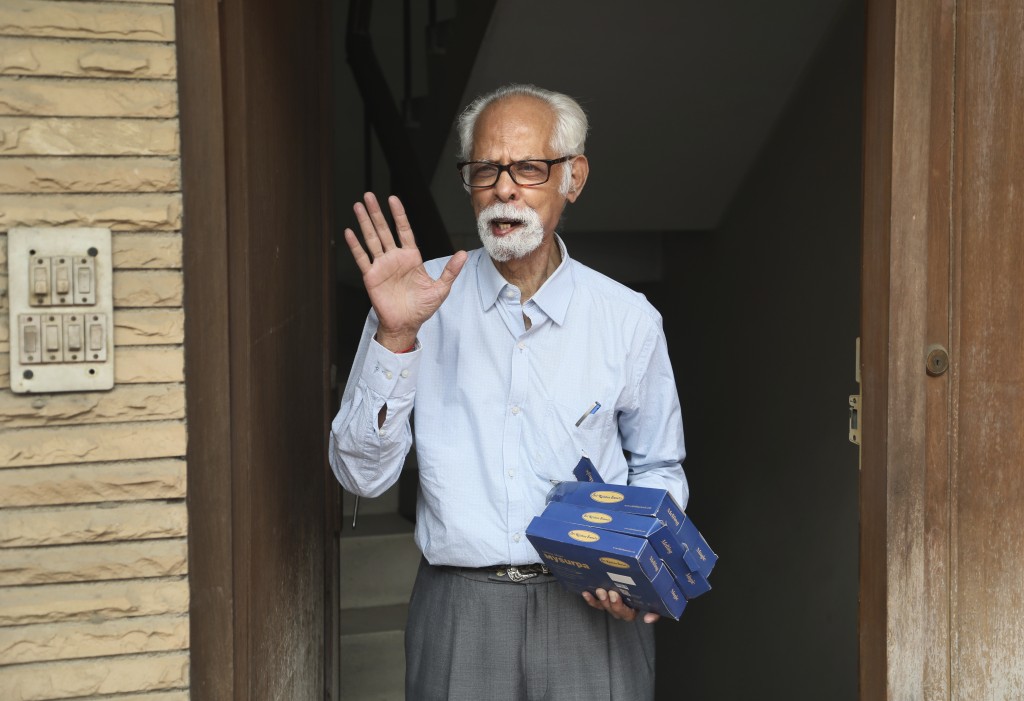 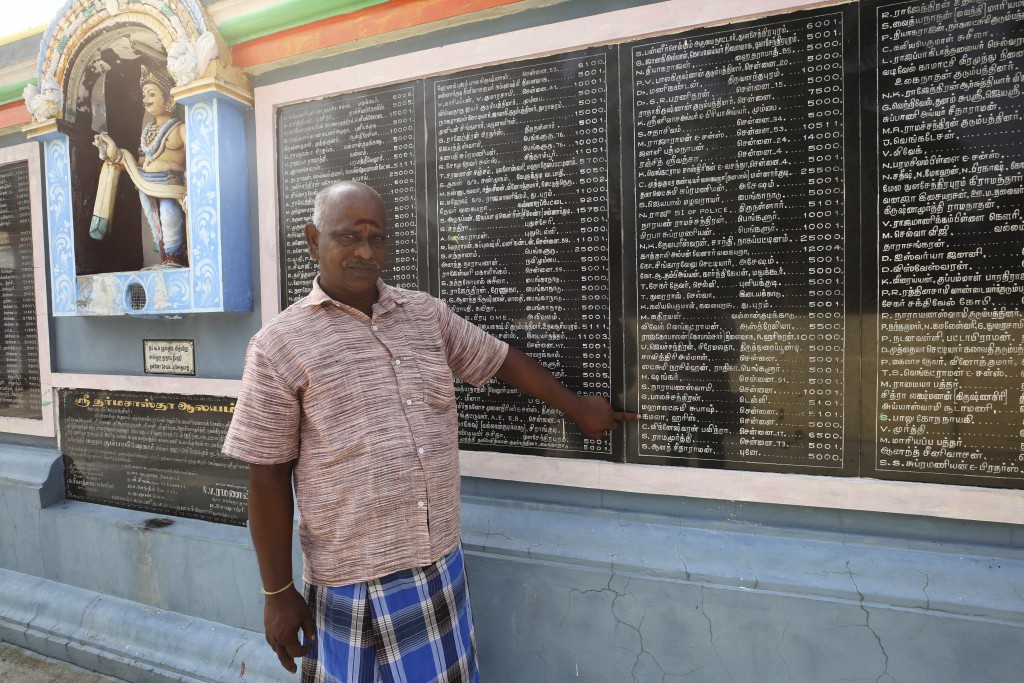 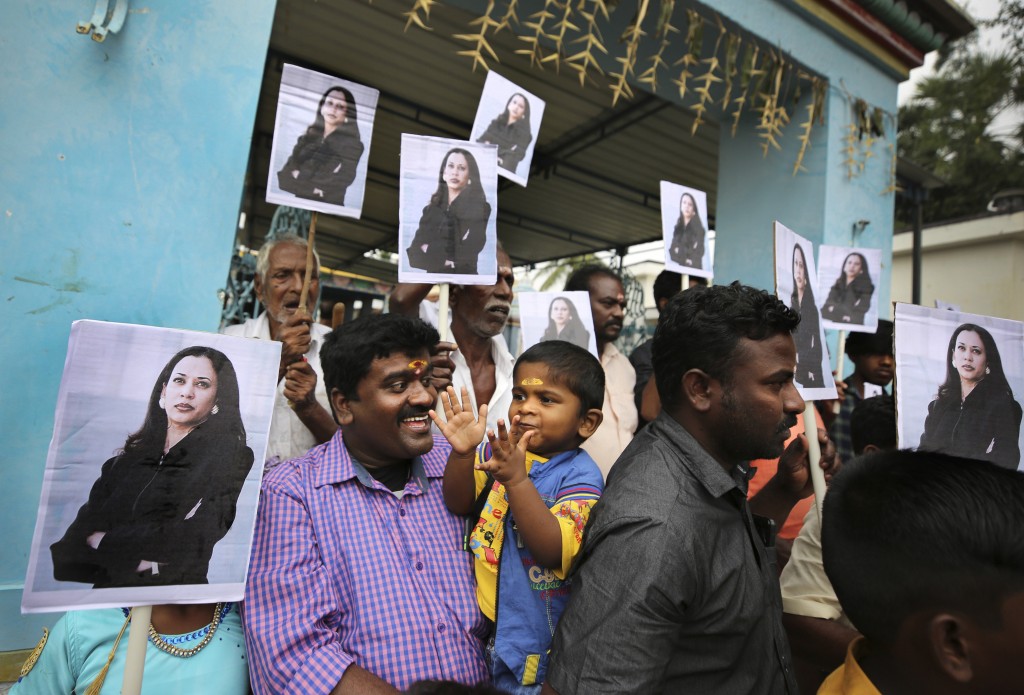 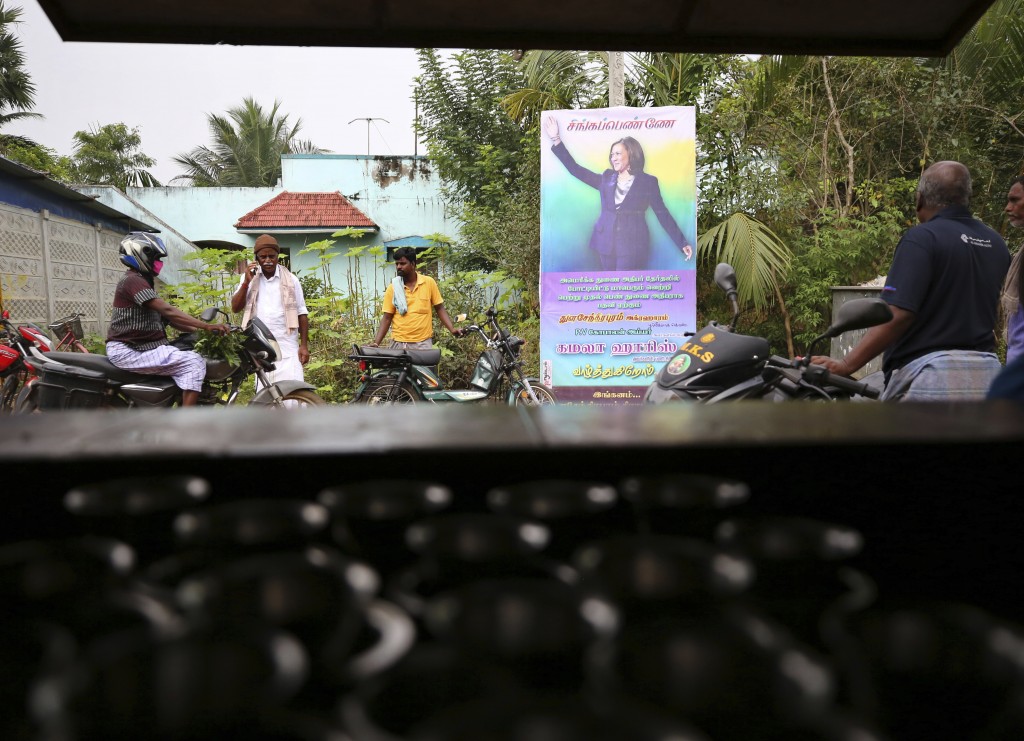 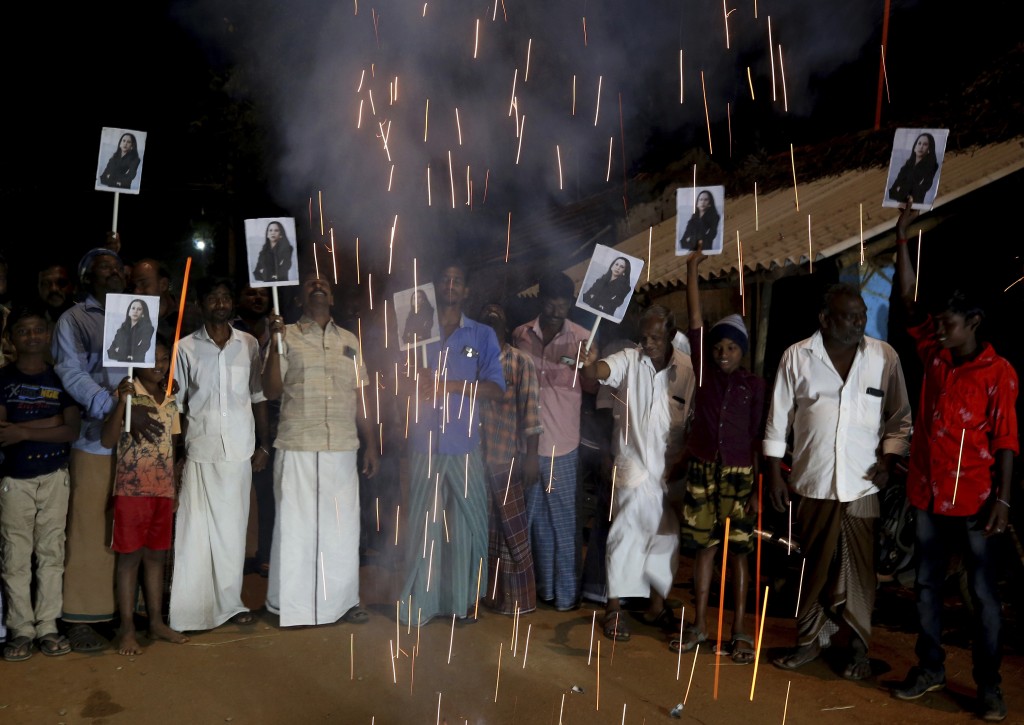 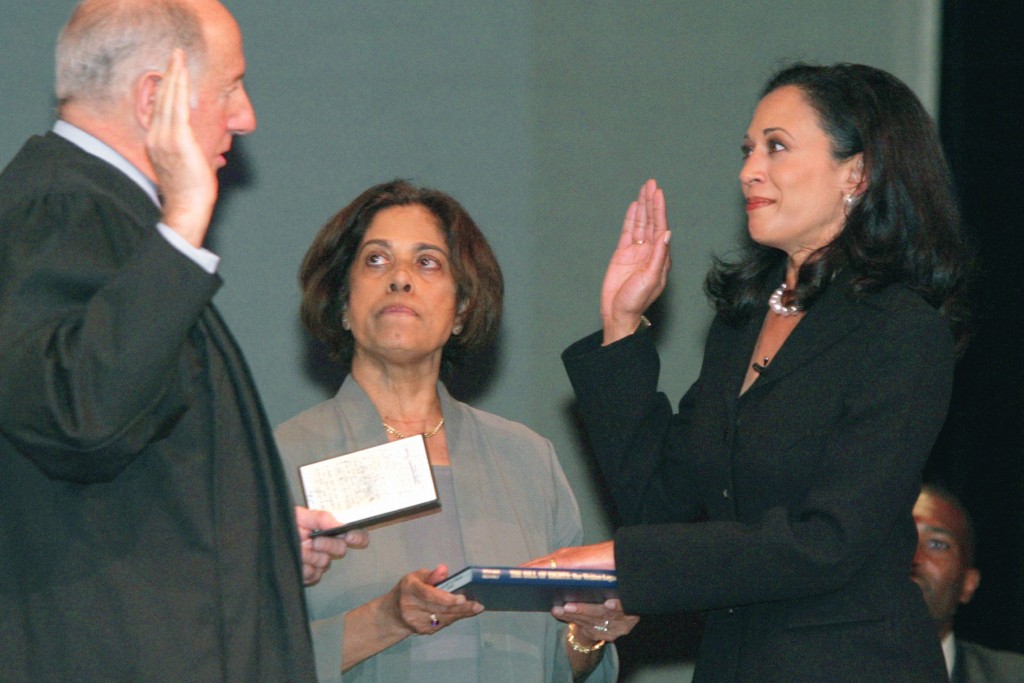 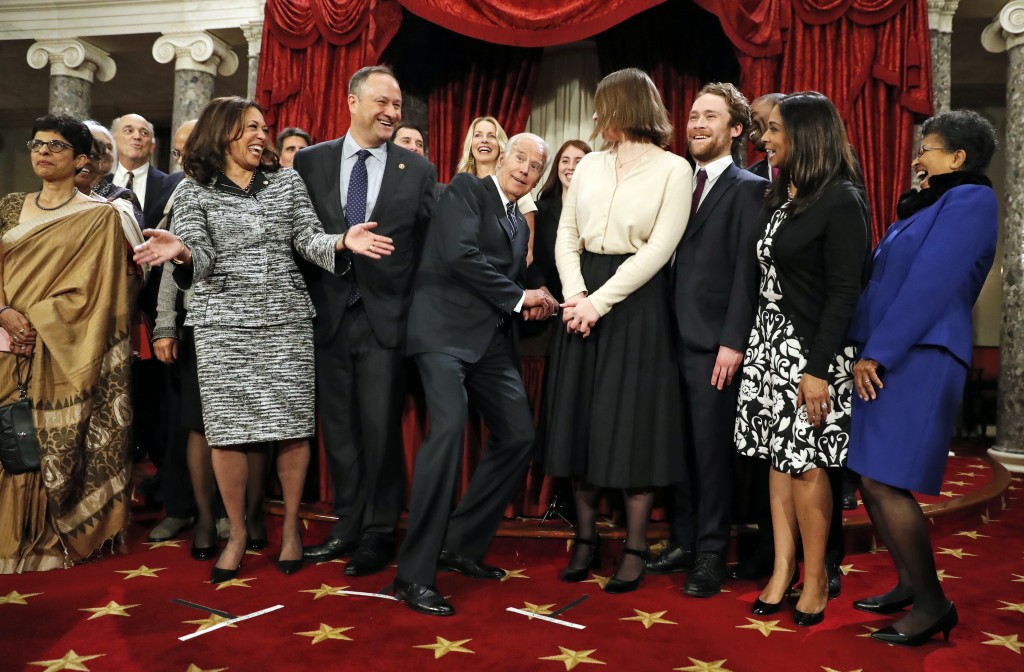 WASHINGTON (AP) — G. Balachandran turned 80 this spring — a milestone of a birthday in India, where he lives. If not for the coronavirus pandemic, he would have been surrounded by family members who gathered to celebrate with him.

But with the virus ravaging his homeland, Balachandran had to settle for congratulatory phone calls. Including one from his rather famous niece: Vice President Kamala Harris.

“Unfortunately, because of the COVID, I cannot have such an elaborate function,” the retired academic said in a Zoom interview Thursday from his home in New Delhi.

Harris' uncle says he spoke with the vice president and her husband, Doug Emhoff, for quite a while. To close out the conversation, Harris assured him she’d take care of his daughter — her cousin — who lives in Washington.

“Don’t worry, Uncle. I’ll take care of your daughter. I talk to her quite a lot,” Balachandran recalls Harris telling him in their March conversation.

It was the last time they had a chance to speak. Since then, the coronavirus has raged out of control in India, overwhelming the nation’s health care system and killing hundreds of thousands of people.

While the crisis in India has created diplomatic and humanitarian challenges for the Biden administration, for Harris it is also personal: Her mother was born there, and she’s spoken emotionally throughout her political career about the influence of her many visits to India as a child.

On Friday, she’s set to deliver remarks at a State Department event focused on the effort to combat COVID-19 in India, and she’s expected to express U.S. solidarity with the nation.

Speaking at a fundraiser for the Indian nongovernmental organization Pratham in 2018, Harris talked about walking hand-in-hand with her grandfather, P.V. Gopalan, and listening to him speak with friends about the importance of a free and equal democracy.

“It was those walks on the beach with my grandfather on Besant Nagar that have had a profound impact on who I am today,” she said.

She spoke often on the campaign trail about her late mother, Shyamala Gopalan, a headstrong and resilient woman who bucked tradition and decided to leave India to pursue a career as a scientist at the University of California, Berkeley.

And during her acceptance speech at the 2020 Democratic National Convention, Harris opened her speech with a shout-out to her “chithis” — a Tamil word for aunt. One of those chithis, Sarala Gopalan, is a retired obstetrician who lives in Chennai.

As a child, Harris used to visit India every other year. Now all that remains of her extended family there are her aunt and uncle. Another Indian-born aunt lives in Canada.

“The conditions are pretty bad in India,” he said.

Balachandran considers himself one of the lucky ones, as he’s retired and largely stays home alone, leaving only occasionally for groceries, so that “nobody can infect me other than myself.”

His sister Sarala is the same, he says, and has largely isolated herself in her apartment in Chennai to avoid exposure. Both are fully vaccinated, something he knows is a luxury in India, which has suffered from a severe vaccine shortage.

That shortage is part of what prompted criticism in India of what many saw as an initially lackluster U.S. response to a humanitarian crisis unfolding in the nation over the past month. The U.S. initially refused to lift a ban on exports of vaccine manufacturing supplies, drawing sharp criticism from some Indian leaders.

When COVID-19 cases in India started to spin out of control in April, there were calls for other countries — particularly the U.S. — to get involved. While a number of countries, including Germany, Saudi Arabia and even India's traditional foe Pakistan, offered support and supplies, U.S. leaders were seen as dragging their feet on the issue.

The White House had previously emphasized the $1.4 billion in health assistance provided to India to help with pandemic preparedness and said when asked that it was in discussions about offering aid.

The delay in offering further aid was seen as putting a strain on long-standing close diplomatic relations between the two nations, and on April 25, after receiving scrutiny over the U.S. response, a number of top U.S. officials publicly offered further support and supplies to the nation — including a tweet and a call to Indian Prime Minister Narendra Modi from President Joe Biden himself.

Harris’ niece in California, Meena Harris, has retweeted a half-dozen accounts calling for more aid to India, including one from climate activist Greta Thunberg admonishing the global community to “step up and immediately offer assistance.”

The U.S. announced it would lift the export ban on vaccine manufacturing supplies and said it would send personal protective equipment, oxygen supplies, antivirals and other aid to India to help the nation combat the virus.

The administration gets no criticism from S.V. Ramanan, a temple administrator of the Shri Dharma Sastha Temple in Harris’ Indian grandfather’s hometown Thulasendrapuram in Southern Tamil Nadu state, 215 miles (350 kilometers) from the coastal city of Chennai.

“Everyone has their priorities. America also passed through something similar and we helped then. Now they are helping us,” he said.

Ramanan added that he didn’t expect that having Harris as vice president fast-tracked aid to India or that it somehow meant help should have come earlier, adding: “I think in general all other countries should help, and I’m glad the U.S. has stepped up.”

He hopes Harris can make a visit to her ancestral village when things are better.

While Harris has embraced her Indian heritage as part of her political profile, in responding to the crisis there she’s been careful to speak from the perspective of a vice president rather than an Indian American worried about her family’s safety.

“We are all part of a world community. And to the extent that any of us, as human beings who have any level of compassion, see suffering anywhere around the world, it impacts all of us. You know, it impacts us all,” she told reporters last week in Ohio.

A ban on travel to and from the country was announced that day. Harris said only that she hadn’t spoken to her family since the ban was announced.

And G. Balachandran, Harris’ uncle, doesn’t fault his niece for how the U.S. response has played out.

“Knowing Kamala,” he said, “she would have done all that she can in order to expedite the matter.”

For now, he's content with the occasional phone call from his niece. When the two talk, it’s mostly about family; he doesn’t share much about current affairs in India because, he joked, “she’s got a whole embassy that’s sending her cables every hour on all of India!”

But he does hope to visit the vice president's residence in Washington at the Naval Observatory when he can travel again. Balachandran said he'd like to meet Biden again and remind him that the last time they met was when Biden was vice president and swore in Harris as a U.S. senator.

“I wish we could all be together at the same time,” he said of the extended family, “but that’s a big wish to look for at this moment.”