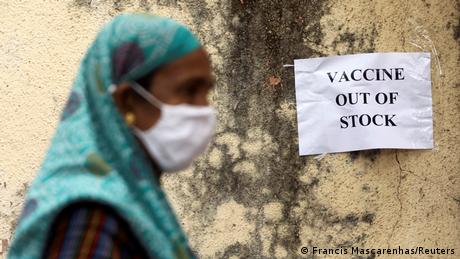 Pressure is growing to expand access and production to COVID vaccines, as the US announced Wednesday it would support a proposal to temporarily suspend intellectual property (IP) patents on vaccine technology.

The proposal, originally brought by India and South Africa to the World Trade Organization (WTO) in October 2020, contends that allowing drugmakers in poorer countries access to the technology will speed up the production of vaccines.

The US had previously opposed the waiver proposal, arguing it would stifle innovation. The EU and the UK have also opposed the idea. On Thursday, the EU cautiously said it is "ready to assess" how the proposal could ramp up global vaccine production.

The term "vaccine nationalism" has long been used to describe how high-income countries have prioritized securing vaccines for their own populations, while lower-income countries must wait for doses.

Health officials around the world have warned since the beginning of the pandemic that defeating coronavirus is a global fight, and herd immunity can only be achieved with equitable distribution of vaccines.

Dr. Jerome Kim, director-general of the International Vaccine Institute (IVI) in Seoul, South Korea, spoke with DW about vaccine nationalism, the challenges of getting COVID vaccines in arms around the world, and achieving global herd immunity to coronavirus.

DW: Why is there a shortage of vaccines in some places as opposed to others?

Jerome Kim: It's safe to say there's a shortage of vaccines in most countries in the world, with some exceptions.

If vaccines were more available, countries around the world would be further along in their vaccinations.

What are your concerns about the financial interests of pharmaceutical companies that are not sharing or open-sourcing their intellectual property on COVID vaccines?

IVI strongly supports safe, low-cost vaccines around the world. But not all organizations can do that, and if you're a company, you're going to have to generate a profit. We don't have really successful non-profit vaccine manufacturers.

With those caveats, I think that it's easy to say we should open patents to everybody.

But the real question, I think, is: Are we going to be able to get as much high-quality vaccine out as needs to get out as quickly as possible if we were to just open the books on all the patents?

Even if you were given the RNA sequence of the vaccine, it wouldn't help you make it, because, for vaccines in particular, there's a huge amount of know-how.

And there's also how the vaccines are made. The Moderna and Pfizer vaccines have a lipid fatty coating. That fatty coating is the secret. And if the company were to give that away, it would make it more difficult for them — it's also the secret for their other vaccines.

I think it's important for technology to get out there. But it does take a while, particularly if you're dealing with a company that hasn't done it before, and we've seen what happens if it's not done correctly.

Do you think governments can pressure pharmaceutical companies into sharing vaccine technology? Does the cost of prolonging the pandemic outweigh profits?

From a humanitarian perspective, this is a disaster. We have 3 million deaths, and if we only vaccinate the high-income countries, there will be 6 million, according to a study by the Gates Foundation.

We also know that the high-income countries are actually hurting themselves by not being more equitable in the distribution of vaccines.

There are other ways to do this. But we need to be smarter.

This treaty on pandemics that the WHO is developing should have specific wording around access and affordability, and the ability to transfer that technology in a manner that benefits global health, and also protects the companies to some extent, because a lot of this is possible because of innovation.

The last thing that you want is for a company to say, "Well, we're not going to play because you're going to take our lipo-nano-particle, which we want to use for cancer, and that we think is a multi-billion dollar market, and use it for this vaccine that you're going to confiscate from us in the end."

If you set the wrong precedent, you could really have a chilling effect on our response to the next pandemic.

We need to have the vaccine tech transferred. There are companies in South Korea that could make RNA vaccines. AstraZeneca and Novavax could be made by SK.

And there are companies in India and elsewhere that have competent regulatory authorities that could push vaccines forward and get them approved.

How can vaccine production capacity around the world be better utilized?

One of the remarkable things about our response to this pandemic is not only the speed of vaccine development but the willingness of the developers to distribute manufacturing around the world.

It is almost unheard of for major vaccine companies to make someone else's vaccine.

And that's important. Companies like AstraZeneca are talking to an Indian company, a Brazilian company, and a Korean company. So, the AstraZeneca vaccine is actually being transferred to many major vaccine manufacturers around the world.

Going to companies that have a known track record of manufacturing vaccines in high quantity and quality is actually really critical because vaccines are biological.

I could give you the vaccine, but you wouldn't be able to make it on a benchtop. It requires a whole series of steps to ensure that every batch of this biological product is the same as the previous batch so that the stated efficacy gets repeated time and time again, by the current batch and by future batches.

And that is a level of quality that is really significant. Not everyone can make a vaccine.

You are going to want to go to a company that has done it right before, and SK, the Serum Institute of India, and other vaccine manufacturers around the have already received approval for other vaccines from the World Health Organization.

A lot of countries would like to have vaccines manufactured within their borders, and I think that’s a good objective in the medium to long term. There are lots of questions that should be asked. But what’s most important is that the vaccines are safe and efficacious.

Dr. Jerome Kim is the director-general of the International Vaccine Institute (IVI) in Seoul, South Korea.