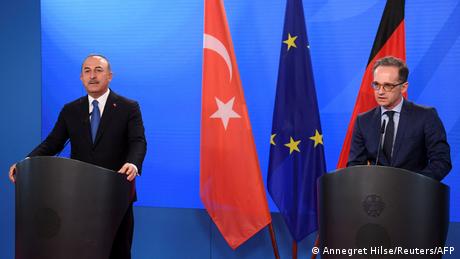 Relations between Turkey and the European Union are looking promising this year after a period of tensions, German Foreign Minister Heiko Maas said on Thursday.

Maas' remarks came following a meeting with his Turkish counterpart Mevlut Cavusoglu as signaled a fresh start in contentious ties with Brussels.

During a joint press conference, Maas said "Turkey can contribute the most" when asked what more Germany could do for Ankara's bid to join the EU.

"We know ... that we are interested in these talks, and of course in goals and results. Last year, was a difficult year in the relationship between the EU and Turkey. This year looks to be a much better one."

One of the recent issues that piled on Turkey's strained ties with Brussels was a seating arrangement at a summit between EU leaders and Turkish President Recep Tayyip Erdogan last month.

The incident, dubbed "sofagate," transpired when a chair was made available for the EU Council President Charles Michel, but not for EU Commission President Ursula von der Leyen.

Cavusoglu on Thursday rejected sexism allegations and said that the incident was a "protocol problem" rooted in a deeper dispute within the EU between the Council and the Commission.

"I was also surprised at first when I saw this then," Cavusoglu told reporters.

What is next for EU-Turkey relations?

The bloc is expected to address its relations with Ankara at a European Council leaders' meeting in June.

Turkey has been a nominal EU accession candidate since 1987, however, talks have stalled or even regressed since 2016, with some EU member states demanding negotiations be broken off for good, citing a lack of compatibility between Turkish and EU values.

Cyprus, Greece, and France have urged a tough line with Turkey, while others, led by Germany, want more engagement.