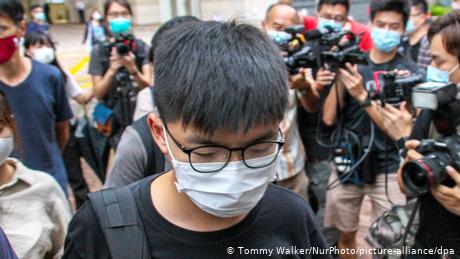 Hong Kong's District Court on Thursday sentenced activist Joshua Wong to another 10 months in prison for participating in an unauthorized assembly on June 4 last year to mark the anniversary of Beijing's 1989 crackdown on protesters in Tiananmen Square.

The 24-year-old was sentenced alongside three district councilors.

"The sentence should deter people from offending and re-offending in the future," Chan said. The judge said the four defendants' attendance at the vigil was "deliberate, premeditated... and openly defied the law."

Who else has been charged?

Hong Kong media mogul Jimmy Lai is also set to appear in court on Thursday over his participation in the June 4 vigil. He also faces a fraud charge.

Twenty others facing similar charges for their role in Tiananmen commemorations are scheduled to appear in court on June 11.

Wong, one of the most prominent faces of Hong Kong's pro-democracy movement, is already serving a total of 17.5 months in jail for two illegal assembly convictions linked to protests in 2019; he is among 47 activists charged under the national security law.

His 15-month sentence was reduced to 10 because he pleaded guilty to taking part in the banned protest over the Tiananmen Square crackdown.

The annual candlelight vigil was banned last year for the first time in Hong Kong due to pandemic-related restrictions on group gatherings. Some 20,000 people gathered anyway in what was largely a peaceful event.

Since then, prosecutors have brought charges against more than two dozen democracy activists who showed up at the vigil.

Officials have already signaled that this year's vigil could face restrictions again due to the coronavirus.

When asked whether commemorating the victims of Tiananmen would violate the new security law, the city's leader Carrie Lam last month said it was important to show respect to the Communist Party, which celebrated its 100-year anniversary this year.

Commemorations of the Tiananmen crackdown are banned in mainland China, where discussion of the events that took place in Tiananmen Square in Beijing is a highly sensitive topic.

In June 1989, the Chinese government said around 200-300 people died, including soldiers and security personnel, when Chinese military tanks and troops moved into Beijing's Tiananmen Square to break up weeks of student-led protests. But rights groups and witnesses say thousands may have been killed.