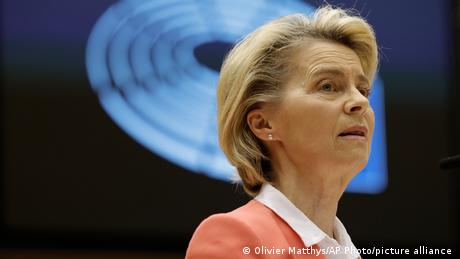 European Commission President Ursula von der Leyen said on Thursday that the bloc was ready to discuss a proposal to waive patents on COVID-19 vaccines, stressing that Europe's priority would be to "ramp up" global supplies.

"The European Union is also ready to discuss any proposal that addresses the crisis in an effective and pragmatic manner," she told an online conference. "And that's why we are ready to discuss how the US proposal for a waiver on intellectual property protection for covered vaccines could help achieve that objective."

However, von der Leyen said that the bloc's top priority was still to "ramp up production to achieve global vaccination."

French President Emmanuel Macron on Thursday said he is in favor of waiving patents on COVID-19 vaccines.

"I am very much favorable to what this is, in effect, this opening of intellectual property. You heard me say this one year ago," he told reporters during a visit to a vaccination center at Porte de Versailles exhibition center in Paris.

But, today, "our real bottleneck, what is making it difficult to provide access to vaccines (...) it's the transfer of technologies and production capacity," he added.

German Foreign Minister Heiko Maas, meanwhile, said he was open to the relaxing of patent restrictions.

"If this is a way that can help ensure that more people are vaccinated more quickly, then it is a question which we must put to ourselves," Maas said after talks with his Turkish counterpart Mevlut Cavusoglu.

Cavusoglu also welcomed the push for an easing of patent protections.

Italy, South Africa, Australia and New Zealand were among other countries voicing tentative support for the proposal.

'Only when Biden moves'

The announcement comes a day after US Trade Representative Katherine Tai said Washington now supports calls for a global waiver on patent protections for coronavirus vaccines.

Bas Eickhout, a member of the EU Parliament and the Dutch GroenLinks (GreenLeft) party, took to Twitter to criticize the bloc's delayed move.

"Each time we Greens asked for this waiver the Commission answered with 'voluntary agreements are better.' Only when Biden moves, the Commission starts shifting. So much for strategic autonomy," he wrote on Twitter, mocking Brussels' plans to adopt a more coherent and independent line on the world stage in areas like defense and foreign policy.

The US and the EU have been under pressure to waive patents so that poorer countries could produce more affordable generic versions of COVID-19 vaccines. Both had up until now resisted calls for a global waiver.

The WHO said in April that of 700 million vaccine doses globally administered, only 0.2% had been in low-income countries.

Even though von der Leyen agreed to discuss a waiver proposal, the EU remains noncommittal for now.

Further talks will take place on Thursday at the Geneva-based World Trade Organization (WTO), which had been backing India and South Africa's push for a waiver on intellectual property rights for months.

Any decision at the WTO has to be by consensus, meaning that any single country could halt the plans.

Why has the EU opposed the waiver?

The bloc, home to large pharmaceutical companies, has said a waiver would undermine incentives for companies to manufacture vaccines in record time in future pandemics.

The EU also argued that vaccine-making is a complex process which requires careful transfer of technology, information and personnel as well as sufficient production capacity, and that a waiver would not resolve such complications.

"In the short run, however, we call upon all vaccine producing countries to allow exports and to avoid measures that disrupt supply chains," von der Leyen said.

"We commend the leadership shown by South Africa, India & the United States, and urge others to back them," she said.

"MSF applauds the US government's bold decision to support the waiving of intellectual property on COVID-19 vaccines during this time of unprecedented global need," said MSF-USA director Avril Benoit, adding that "doing so will increase access to these lifesaving medical tools."

"GAVI urges now that in the interests of global equitable access the US supports manufacturers to transfer not only IP but also know-how in a bid to urgently boost global production," the international health body said.

The global pharmaceutical industry has argued that production of COVID-19 vaccines can't be sped up by relaxing intellectual property protections and that a waiver will do more harm than good in the long run, for instance by compromising incentives for innovators in the industry.

"A waiver is the simple but the wrong answer to what is a complex problem,'' said the International Federation of Pharmaceutical Manufacturers and Associations.

"Waiving patents of COVID-19 vaccines will not increase production nor provide practical solutions needed to battle this global health crisis,'' it said.

Drug companies have said an alternative, faster solution would be for wealthy nations that hold vaccine stockpiles to start sharing them with lower-income countries.

In October, however, vaccine manufacturer Moderna said that it would not enforce its COVID-19 vaccine patents during the pandemic.