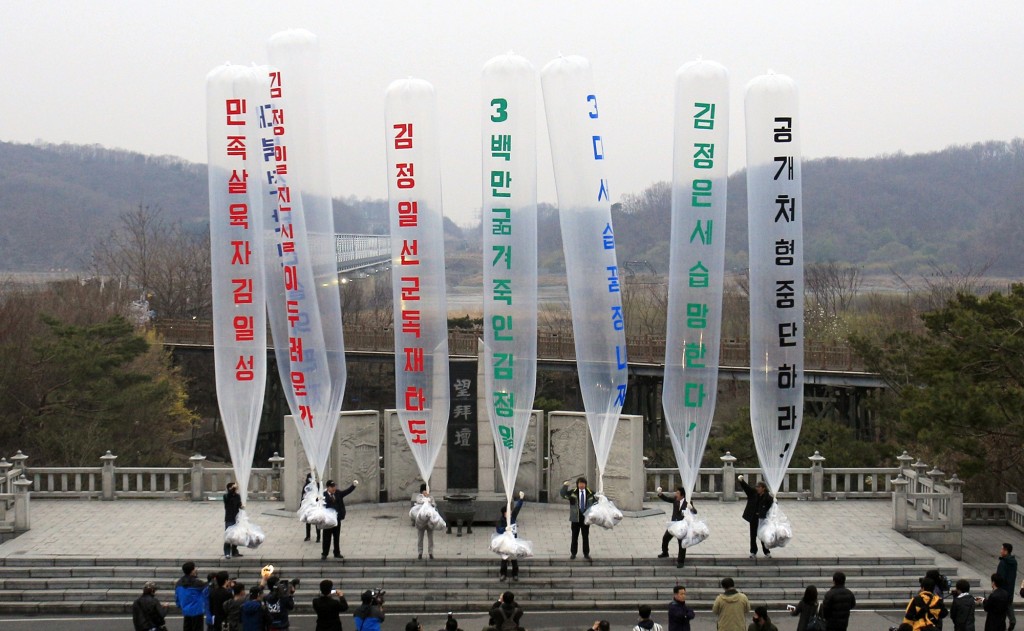 SEOUL, South Korea (AP) — South Korean police on Thursday raided the office of an activist who said he had floated hundreds of thousands of propaganda leaflets toward North Korea by balloon in defiance of a new, contentious law that bans such activities.

The issue of propaganda leaflets has emerging as a new source of animosities between the two Koreas, with Pyongyang calling it a provocation and threatening to retaliate.

The Seoul Metropolitan Police said the raid on the Seoul office of activist Park Sang-hak was related to his announcement that his group launched balloons carrying 500,000 leaflets, 5,000 one-dollar bills and 500 anti-Pyongyang booklets across the border last week.

They refused to provide details, including whether they plan to question him, citing an ongoing investigation.

Park, a North Korean defector who rose to fame because of his campaign to send leaflets across the border, issued a brief statement saying police officers had arrived at his office. His mobile phone was turned off when The Associated Press tried to reach him for additional comments.

Park earlier said he would fight the new law banning cross-border leaflets and keep launching them to let the North Korean people learn about the truth of their authoritarian government led by Kim Jong Un.

South Korean officials haven’t publicly confirmed that Park had in fact sent the leaflets. But in her statement Sunday, Kim’s powerful sister, Kim Yo Jong, said North Korean defectors in South Korea recently “scattered leaflets against” the North. She called their action “an intolerable provocation” and said her government would look into corresponding measures.

Kim Yo Jong’s statement caused concerns that North Korea might launch some sort of provocation against South Korea. Last year, North Korea blew up an empty inter-Korean liaison office on its territory after Kim Yo Jong furiously reacted to a similar incident in which South Korean civilian set leaflets into North Korea.

If confirmed, Park would be the first person to face the South Korean law that punishes such acts with up to three years in prison. The law took effect in March.

South Korean officials have said they would handle Park in line with the law, but any harsh treatment could deepen criticism that South Korea is sacrificing the freedom of speech to improve ties with rival North Korea. Officials say the law is designed to avoid unnecessarily provoking North Korea and promote the safety of South Korean residents in border areas.