HONG KONG SAR - Media OutReach - 6 May 2021 - More than a year after the start of the pandemic, global economic trends are uneven due to lingering uncertainties around the spread of COVID-19. The acceleration of the vaccination process, as well as its effectiveness, are key to an economic recovery. In this context, the prospects for a return to normalcy are both uneven and uncertain across sectors of activity and geography, according to the latest barometer from Coface, a leading player in the credit insurance industry. 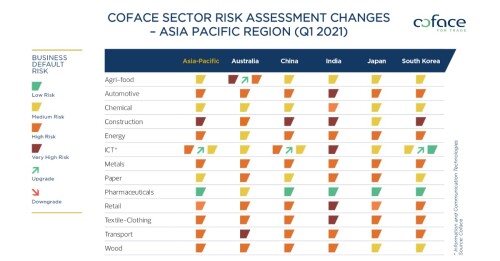 As outlined in the barometer, Coface assumes that the economic recovery will gain momentum from the summer of 2021, when a large enough share of the population in the United States and Europe will be vaccinated. However, there is a risk of delay in the vaccine roll-out, notably due to supply constraints for manufacturers, resulting from shortages of certain components and export restrictions.

Nevertheless, Coface's global growth forecast has been revised upwards by half a point (+5.1% for 2021), thanks to stronger than expected growth in the United States. In this more favourable macroeconomic outlook, Coface is upgrading 35 sectors of activity against only 3 downgrades.

In addition to the United States, several other sectors of the world economy – industry and global trade – are likely to return to their pre-crisis level of activity by the summer. Nevertheless, other sectors are lagging behind, notably in services and especially those that involve physical contact with customers, and across the European economies. Finally, in some major emerging economies, the recovery is also being held back by rising inflation, which is forcing central banks to tighten monetary policy.

Since the beginning of 2021, the balance of surprises is tilting to the positive side, despite the many health uncertainties.

The expected growth gap between the eurozone and the United States is usual, particularly in a recovery phase. This is partly due to weaker automatic stabilizers in the US, which accelerate adjustments in employment and income.

But this time, the reasons for the for the US growth gap are different: less restrictive mobility restrictions than in the eurozone, both in 2020 and early 2021, and a more rapid vaccine deployment.

Differences in economic policy may also explain US outperformance. The US Federal Reserve (Fed) has increased the size of its balance sheet. Its asset purchase program rose by about 13% of GDP in 2020, compared with 9% for the European Central Bank (ECB). Finally, and most importantly, greater fiscal support will allow the US economy to return to its pre-crisis GDP level more quickly.

Adopted in March 2021, the new US support plan amounts to 1.9 trillion dollars (USD), and will bring the total fiscal response to the crisis to an amount equivalent to 27% of US GDP, more than any other mature economy. Coface expects that the public deficit could be up to 56 billion dollars higher than it would have been without the stimulus package.

The aim of this strategy is to put the US economy under "high pressure", i.e. to implement expansionary monetary and fiscal policies that encourage a return to work for the least employable people (long-term unemployed or inactive due to discouragement, low-skilled people and categories of the population suffering from discrimination in hiring).

The eurozone is unlikely to return to its pre-crisis GDP level before 2022. If the main mobility restrictions are lifted by the end of the summer, this will go hand in hand with a gradual halt to business support measures, which could cause unemployment to rise. In addition, the increase in corporate debt – made possible by government-guaranteed loans – is likely to limit their investment capacity.

Until now, the main government support measures implemented in 2020 have not yet been withdrawn. Despite the stabilizing effect of government aid, the financial health of companies has deteriorated significantly in 2020, which should normally lead to an increase in insolvencies. According to Coface, insolvencies in 2020 should have increased by 19% in Spain, 7% in Italy and 6% in France and Germany. Coface estimates the number of hidden insolvencies at 44% of those recorded in France in 2019, 39% for Italy, 34% for Spain and 21% for Germany.

According to the International Monetary Fund's April 2021 forecasts, emerging economies will be more permanently affected by the current crisis than mature economies.

In 2024, GDP in emerging economies will be 4% lower than it would have been had it not been for the COVID crisis. For mature economies, the gap would be only 1% (compared to 10% following the global financial crisis). There are several reasons for this expected lag between the recovery of mature and emerging economies.

First, the vaccination process is more advanced in mature countries, even if some emerging economies are well on track, such as the United Arab Emirates, Chile and, to a lesser extent, Turkey and Morocco, where at least 10% of the population had been fully vaccinated by April 8. But apart from these few cases, the fact that the United States and Europe have acquired the majority of vaccinations means fewer doses for other countries. Among the four main vaccine-producing areas (China, the United States, Western Europe and India), the temptation to implement protectionist measures is increasingly strong. For example, India has already announced a temporary halt to the export of vaccines to prioritize vaccine deployment in India, where the number of cases has risen significantly since the beginning of March.

In addition to these uncertainties, many emerging economies are doubly hit by their exposure to economic sectors hardest hit by the crisis (tourism and transport in particular).

On the positive side, however, the rise in the price of oil and agricultural commodities is good news for economies that suffered from the opposite trend last year. In addition, the positive outlook for US consumption should fuel strong export volumes, especially among consumer goods producers.

On the other hand, the widening of the US budget deficit is encouraging capital outflows from emerging markets, as upward revisions of the US GDP growth outlook push up long-term US interest rates, narrowing the gap with its emerging market counterparts, and making the latter less attractive to financial investors. This has resulted in a depreciation of emerging currencies, notably in Turkey and Brazil.

The complete barometer is available here.

With 75 years of experience and the most extensive international network, Coface is a leader in trade credit insurance and adjacent specialty services, including Factoring, Debt Collection, Single Risk insurance, Bonding and Information services. Coface's experts work to the beat of the global economy, helping ~50,000 clients, in 100 countries, build successful, growing, and dynamic businesses across the world. Coface helps companies in their credit decisions. The Group's services and solutions strengthen their ability to sell by protecting them against the risks of non-payment in their domestic and export markets. In 2020, Coface employed ~4,450 people and registered a turnover of €1.45 billion.

COFACE SA. is listed on Compartment A of Euronext Paris.