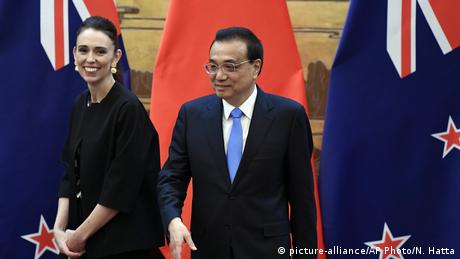 New Zealand's parliament unanimously voted to name China's treatment of the Uyghur people in Xinjiang province as severe human rights abuses on Wednesday, but shied away from the term genocide put forward by the opposition.

All parties supported the motion put forward by a small opposition party, but the original designation of "genocide" was replaced with the phrase "severe human rights abuses" following an objection from Prime Minister Jacinda Arden's ruling Labour Party.

While allies such as Canada, the US and Britain — from the Five Eyes intelligence network — have all called China's abuses of minority Uyghur Muslims in Xinjiang genocide, New Zealand followed the path of its Pacific neighbor Australia in toning down its criticism. Both countries have strong economic ties with China, in large part because of their geography.

How did lawmakers respond to the change?

Brooke Van Velden, the deputy leader of the ATC Party that put forward the original proposal, said it was "intolerable" that New Zealand had shied away from the term genocide to placate its largest trading partner.

"The world is looking to us now to see what standard we are going to set — can the CCP [Chinese Communist Party] play us off as the weakest link in the Western alliance," she said.

"We may face the threat of loss if we speak our mind, but we face a much greater danger if we don't," the opposition lawmaker said.

Foreign Minister Nanaia Mahuta, however, defended the government's decision to not use the term, insisting that New Zealand had raised concerns over the situation in Xinjiang multiple times, but that genocide was a serious legal accusation.

"This is not due to a lack of concern," Mahuta said. "Genocide is the gravest of international crimes and a formal legal determination should only be reached following a rigorous assessment on the basis of international law."

What is happening in Xinjiang?

According to activists and human rights experts, more than 1 million people — mostly Uighurs, and other ethnic minorities — have been held in Chinese internment camps since 2017.

Mass rapes and the forced sterilization of women are also alleged to have taken place in the camps.

The Chinese ambassador to New Zealand Wu Xi said in a speech in Auckland earlier in the week, that accusations of forced labor and genocide in Xinjiang were fabrications propagated by anti-China forces.