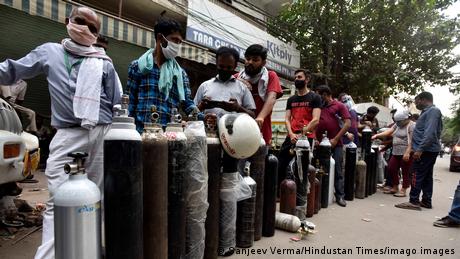 India's central bank on Wednesday pledged $6.7 billion (€8 billion) in cheap loans for vaccine makers, hospitals and other health firms to help the country battle a massive surge in coronavirus cases.

"The immediate objective is to preserve human life and restore livelihoods through all means possible. The second wave, though debilitating, is not insurmountable," said Reserve Bank of India (RBI) Governor Shaktikanta Das.

India's second wave of the virus has seen healthcare crumble with hospitals running out of beds, medical oxygen and supplies. Morgues and crematoriums have overflowed as people died in ambulances and car parks while waiting for beds or oxygen.

The new measures make it easier for banks to give out cheap loans to those in need — hospitals, oxygen manufacturers, patients — in order to bolster the healthcare system and improve access.

The bank will also allow general business borrowers more time to repay loans in an attempt to boost the flagging economy. Das added that he was willing to deploy "unconventional" measures if the crisis worsened.

The country recorded 382,315 new infections on Wednesday, according to health ministry data, a day after India reached a grim milestone of becoming the second country to cross 20 million infections.

According to the World Health Organization, India accounted for one in four deaths across the world over the last week. The country also reported 46% of the global cases in the past week.

A German military aircraft carrying parts of an oxygen production plant headed to India on Wednesday. The plant can generate 400,000 liters of oxygen per day, the Bundeswehr said on Twitter.

A second aircraft with the remaining parts is due to take off on Thursday.

The deliveries are part of Germany's aid package to help India cope with the coronavirus pandemic.

"It was important to act fast," he said in an interview, adding that some 40 other countries had also pledged assistance.

On Saturday, 120 ventilators reached Delhi as well 13 experts to help set up and operate mobile oxygen production units over the next two weeks.

Several countries have also delivered aid to India in the form of oxygen and other medical supplies to relieve critical shortages.