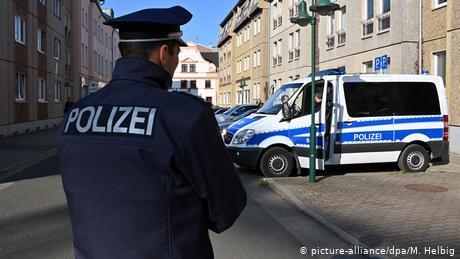 A joint operation carried out by police in Italy and Germany on Wednesday resulted in the arrest of 31 individuals suspected of being part of the 'ndrangheta mafia, Europol said in a press release.

Around 800 police officers and tax officials in both countries took part in the large-scale operation against international drug trafficking and money laundering.

"In total at least several hundreds of thousands [of euros] have been seized, as well as weapons, cocaine, two luxury vehicles and jewelry," Europol said.

"Furthermore, a full assessment of cash amounts seized is ongoing and bank accounts have been frozen," the statement added.

The EU joint law enforcement agency also shared a video with clips from the operation on Twitter.

Why were German police involved?

Businesses in some 46 different locations were raided across Germany, in the states of Baden-Württemberg, Bavaria, North Rhine-Westphalia and Hesse.

Of three arrest warrants, German police were able to successfully carry out one, AFP reported.

The suspects are believed to have smuggled hundreds of kilograms of cocaine from the Netherlands to Italy.

The group is also suspected of having engaged in large-scale tax evasion in Germany — produce was delivered to Italian restaurants across the country without paying sales tax, with illegal profits apparently being sent back to Italy, investigators told AFP.

German investigators told AFP that the Italian operation was focused on the northern Italian region of Piedmont, around the city of Turin, and in the southern region of Calabria — the original home of the 'ndrangheta. Raids were also carried out in Spain and Romania.

The operation "conducted in Turin and with branches in Germany, Spain and Romania demonstrates the pervasiveness of the 'ndrangheta, but also above all the strength of the state," the president of Italy's anti-mafia commission Nicola Morra told ANSA.

The 'ndrangheta crime syndicate is considered the most powerful in Italy, having infiltrated nearly all areas of public life in Calabria.

In January, Italian police busted a large fraud scheme led by the organization leading to 13 arrests, with suspects including government officials and politicians.