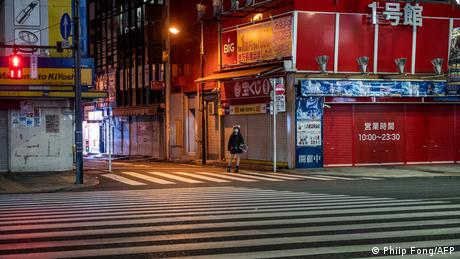 Every spring for the 20 years that Fumie Takenaka has lived in Tokyo, she has taken advantage of the Golden Week holiday period to travel to her hometown in Aichi Prefecture.

She even risked a brief trip this time last year, as the coronavirus pandemic in Japan appeared to be waning. It is clear today, however, that the pandemic returns in waves.

Takenaka told DW that the situation had become so bad now that she is breaking her two-decade tradition and staying at home for this Golden Week.

"It has always been a highlight of the year for the family, a time for us all to get together and catch up, but we have decided that it is just not worth the risk this year," she said.

"My parents are old, and, much as they want to see us, we all realize that we could very easily spread the virus without even knowing it," she added.

The risk is even higher for her husband's parents, who are in their 90s and were also a scheduled stop on the route.

"We have explained the situation to our daughter and she understands, even though she is only 8 years old, and we have decided to stay at home as much as possible this Golden Week and only go to the places that we needed to, such as the supermarket," Takenaka said.

"It’s very unfortunate, as a year ago we all believed this would be over and life would be completely back to normal, but now I worry if next year's Golden Week will be the same," she added.

There were 4,177 new COVID cases reported across Japan on Tuesday and 50 deaths. Of that total, 609 were reported in Tokyo. This had brought the average case number for the city over the past seven days to 842.3, which is nearly 20% higher than the figure for the previous week.

People in their 20s accounted for the largest number of the new infections. Health authorities are warning that most new cases are of the highly infectious variant that was first reported in the United Kingdom. Officials are also battling mutations that were initially reported in South Africa and India, as well as a uniquely Japanese variant.

What is Golden Week?

The rising case load has cast a shadow over Golden Week, a period of nearly consecutive national holidays that many people use to travel, meet up with friends, go shopping or dine out.

April 29 was Showa Day, a holiday in honor of the late Emperor Showa's birthday, while May 3 is Constitution Memorial Day and marks the establishment of the nation’s constitution in 1947.

May 4 is Greenery Day and celebrates nature and the environment, and the holiday season is rounded out on May 5 with Children's Day, when families hoist banners depicting carp, considered a determined and resilient creature, to celebrate the health and happiness of their children.

Anticipating that people might use the holiday season to travel and get out, in late April the government announced a third state of emergency for parts of the country that remain most severely affected by the virus, including Tokyo, the surrounding prefectures of Kanagawa, Saitama and Chiba, as well as the cities of Kyoto, Osaka and neighboring Hyogo Prefecture.

The aim, according to the government, is to halt the spread of the virus and bring down the overall case load ahead of the summer — and the delayed Tokyo Olympic Games.

The response, however, appears to have been patchy. Restaurants are still required to close early but some parts of Tokyo, Osaka and other major urban areas are busy with people shopping. On the plus side, the public appears to be taking heed of requests that they wear masks, use disinfectant provided at the entrances to shops and are attempting to keep their distance from other people, although public transport is undoubtedly congested.

Many people say they are bored of being cooped up at home and need to get out and experience a degree of normality. For others, there is an even more pressing need.

"This has been the busiest week for well over a year," said Issei Izawa, a student who works part time at a wedding hall in Yokohama, south of Tokyo.

When can Japan celebrate again?

"A lot of people postponed their weddings last year because of the pandemic, but they are not able to put them off indefinitely and they are desperate to go ahead, so lots of couples are having their ceremonies this Golden Week," Izawa said. "It has been hectic."

Izawa said the wedding venue had introduced restrictions on the number of guests and is prohibited from serving alcohol, one of the state of emergency provisions, but has been booked for the last six days solid.

"There's uncertainty everywhere you look at the moment," Izawa said. "I'm still at university, but my part-time job has been cut back and it's even harder for people in full-time positions, especially those in the hotel or travel business. I do not think a year ago anyone realized how long this was going to drag on for."

"I know the vaccine is coming out and numbers are coming down in a lot of countries, but I think a lot of people are worried about these new variants of the disease," he said.

"I wonder what things will be like by the next Golden Week."