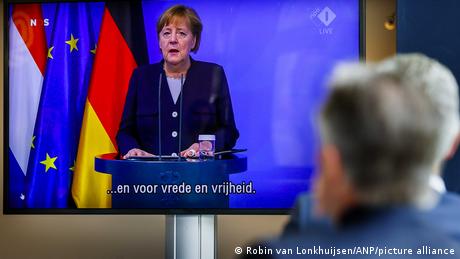 German Chancellor Angela Merkel gave an online speech on Wednesday to mark 76 years since the Netherlands was liberated from Nazi occupation.

Merkel initially planned to give the speech last year on the 75th anniversary, but the coronavirus pandemic forced her to postpone the event.

What did Merkel say?

Merkel recalled the atrocities committed by the Nazis, who murdered three-quarters of the Jewish population in the Netherlands — "more than in any other country in Western Europe."

"Nothing can take away the pain of the survivors of the concentration camps," Merkel said.

"We Germans will never forget that the Netherlands reached out to us for reconciliation after World War II," she added.

The chancellor stressed that the memory of the crimes committed by the Nazis in Europe must be kept alive.

"This is Germany's eternal responsibility," she said via video from Berlin.

After her speech, Merkel held virtual discussions with students on the meaning of freedom along with Dutch Prime Minister Mark Rutte.

Rutte and students were physically present in the Kunstmuseum, an art museum in The Hague.

The chancellor said she felt "grateful for the invitation from Rutte" to speak on Dutch Liberation Day, accepting the invitation a "special sign of friendship."

During the occupation, more than three-quarters of the country's Jewish population were murdered, with deportations to concentration camps beginning in July 1942.

The deaths included the 102,000 Jews massacred in Nazi death camps. The large majority of Dutch Jews had been deported to Auschwitz and Sobibor.

Of the countries in Western Europe occupied by the Nazis, the Netherlands suffered the largest number as a result of the persecution of the Jews, both in terms of percentages and in absolute numbers, according to the nonprofit the Anne Frank House.

During her speech, Merkel also highlighted Europe's current challenges in freedom and fundamental rights posed by the coronavirus crisis.

"For the first time since World War II, fundamental freedoms are restricted to an extent that was beyond our imagination before the pandemic," she said during the virtual session.

She praised "European solidarity as the result of a unique process of reconciliation and unification" that helped overcome the crisis.

The Dutch broadcaster NOS reported Merkel was asked to give the lecture on Liberation Day because, according to the National Committee for 4 and 5 May — a Dutch authority for war monuments and memorials — she is "steeped in history and has been committed to peace, freedom and stability in Europe for many years."

Speeches were previously given by the writer and scientist Rosanne Hertzberger, the actor Nasrdin Dchar and King Willem-Alexander (then the prince). In 2012, German President Joachim Gauck delivered the lecture.