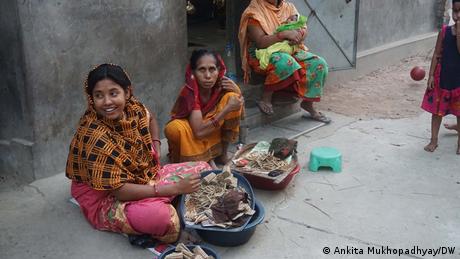 Every house in Hariharpara, a village in the Murshidabad district of West Bengal, has women in front rolling beedis, which are traditional thin cigarettes.

Women and child laborers who work in the Beedi trade, along with labor advocates, are calling for protections and benefits due to the dangers and low pay of the work.

"The contents of the cigarette, if inhaled, can cause several health problems such as back pain, infertility and even blindness. But the economic exploitation of these women for low wages supersedes their health."

She added that children of beedi workers also become prone to disease, as they sit beside their mothers, inhaling the chemicals.

The face of Manjuri Debnath, a beedi worker, is lined with wrinkles, hiding her actual age of 40.

Debnath has poor vision after making beedis for over 30 years. She frequently feels dizzy after inhaling the dangerous chemicals.

"I started rolling beedis to make ends meet for my family. I continue to do so, as I can't afford to buy even one meal otherwise," she told DW.

Debnath is also disappointed that she didn't qualify for welfare under a state government scheme for beedi workers.

Under the welfare scheme, a beedi worker is entitled to a state subsidy of 20,000 Indian rupees. However, most women aren't even aware of such benefits.

Rimpa Bibi, 28, couldn't complete her education after falling victim to child marriage. She had her first child at the age of 14 and her second at 16.

Bibi returned to her village to roll beedis when the tire factory she worked for in Ludhiana, Punjab, suddenly closed down due to the nationwide lockdown.

"Right now, my focus is on earning enough money for them [her children] to be educated so that they don't join the informal sector like me," she said.

Arjina, another woman in Rimpa's village, grew up watching her mother rolling beedis. Growing up next to the trade has heavily impacted her health, even before turning 30.

"I almost died during my last pregnancy. I fainted one day and then opened my eyes in the hospital, with the doctors telling me that they could either save me or the child, as I was bleeding profusely," she told DW.

Both Bibi and Arjina are working to advocate for better mental and physical health care for beedi workers.

Women like Manjuri Debnath and Rimpa Bibi are part of the organized workforce, and have a basic awareness about their rights. However, women in Lalgola, a village in the Lalbag subdivision, have a different experience.

For women like Sakina (name changed), who belongs to the unorganized workforce, rolling beedis is part of her daily life. "It's like taking care of my children. I can't get rid of the responsibility," she told DW.

Her neighbor says that sometimes a cut is deducted from her pay for pension. "I don't know what a pension is, though," Sakina told DW.

She is also unaware that she works for a beedi company.

"There is this one man who comes to collect the beedis every day. We call him Mahajan," she said.

Meanwhile, two girls in Lalgola dropped out of school, after classrooms closed due to the coronavris pandemic. They then started rolling beedis to make ends meet. Arshiya, 12, said she enjoys making the beedis, however.

"It's exciting to roll beedis as fast as possible. I hope to be able to pay for my marriage someday, by rolling beedis and becoming financially independent."

According to Niharul Islam, a local activist and poet, several girls are now, however, considering other career options as new opportunities arise.

"Beedi-making may become a thing of the past if the TMC-led state government continues its schemes for young girls," he told DW.

"Under the 'Kanyashree Prakalpa' scheme, girls receive an annual scholarship and a one-time grant of 25,000 Indian rupees. This has motivated many parents to keep their girls in school and not push them into the dangerous profession of beedi-rolling."