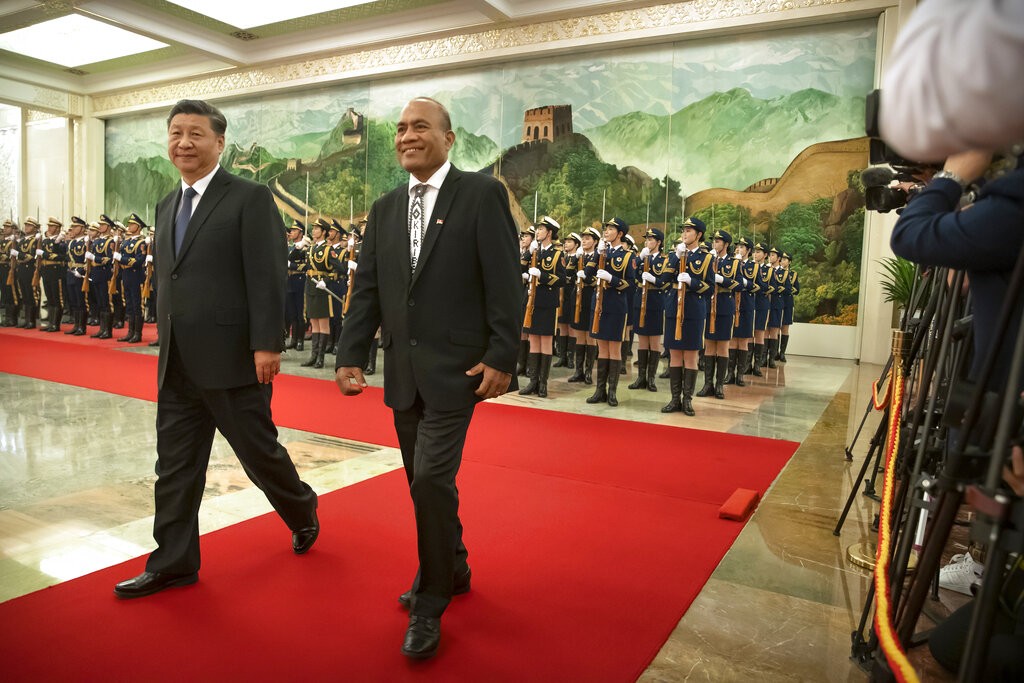 SYDNEY (Reuters) - China has drawn up plans to upgrade an airstrip and bridge on one of Kiribati’s remote islands about 3,000 km southwest of Hawaii, lawmakers told Reuters, in a bid to revive a site that hosted military aircraft during World War Two.

The plans, which have not been made public, involve construction on the tiny island of Kanton (also spelled Canton), a coral atoll strategically located midway between Asia and the Americas.

Kiribati opposition lawmaker Tessie Lambourne told Reuters she was concerned about the project, and wanted to know whether it was part of China’s Belt and Road Initiative.

“The government hasn’t shared the cost and other details other than it’s a feasibility study for the rehabilitation of the runway and bridge,” Lambourne told Reuters. “The opposition will be seeking more information from government in due course.”

The office of Kiribati President Taneti Maamau did not respond to questions.

The Chinese foreign ministry did not immediately respond to questions.

Despite being small, Kiribati, a nation of 120,000 residents, controls one of the biggest exclusive economic zones in the world, covering more than 3.5 million square kilometres of the Pacific.

Any significant build-up on Kanton, located 3,000 kilometres (1,864 miles) southwest of Hawaii and U.S. military bases there, would offer a foothold to China deep into territory that had been firmly aligned to the U.S. and its allies since World War Two.

“The island would be a fixed aircraft carrier,” said one adviser to Pacific governments, who declined to be named because of the sensitivity of the project.

The U.S. Navy’s 7th Fleet and U.S. State Department’s Bureau of East Asian and Pacific Affairs did not immediately respond to requests for comment.

Kiribati (pronounced Kiribas) has in recent years been at the centre of a tussle between China and the U.S. and its Pacific allies.

In late 2019 it severed diplomatic ties with Taiwan in favour of China, in a decision overseen by Maamau, who went on to win a closely contested election on a pro-China platform.

The diplomatic shift, which mirrored events in the Solomon Islands, was a setback for self-ruled Taiwan, which China claims as a province with no right to state-to-state ties. Taiwan counts the U.S. as an important international backer and supplier of arms.

Kanton has been used by the U.S. for space and missile tracking operations and its near 2-kilometre (6,562 ft) runway hosted long-range bombers during the war.

The Australian Strategic Policy Institute (ASPI) said in a paper last year that Chinese facilities on Kiribati would be positioned across major sea lanes between North America, and Australia and New Zealand.

Beijing has labelled the think tank as “anti-China”.

Along with its strategic significance, the waters around Kanton are rich in fish, including tuna, although commercial fishing is prohibited as the island is in a marine protected zone.

There are around two dozen residents on Kanton who rely on subsistence fishing and supply ships.