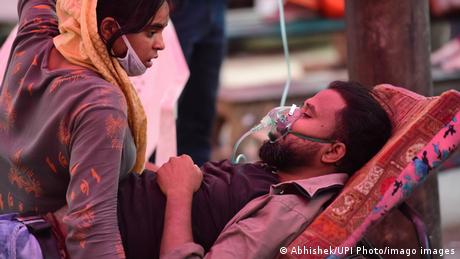 The exponential surge in India's coronavirus infections over the past few weeks has swamped the health care system, seen patients dying in ambulances and parking lots outside hospitals and overwhelmed crematoriums.

It has also drained supplies of medical oxygen, which is vital for those who have been infected. The dire shortage has turned out to be a major challenge facing hospitals in many states across the country.

Dozens of hospitals in a number of Indian cities and towns have run short of the gas, sending relatives of patients scrambling for oxygen cylinders, sometimes in vain.

Twenty-four people died in one hospital overnight on Sunday in the southern state of Karnataka after the hospital ran out of oxygen, according to press reports and sources, though the district administration denied that shortages had caused the deaths.

Another 12 people died on Saturday in the capital, New Delhi, after a hospital ran out of oxygen, reports said.

Several hospitals sent out desperate appeals for oxygen on social media on Sunday night, with deliveries arriving only in the nick of time.

One children's clinic in Delhi raised the alarm on Twitter over a shortage of oxygen that has reportedly left around 25 to 30 newborns and children at risk.

Oxygen therapy is crucial for severe COVID patients with hypoxemia — when oxygen levels in the blood are too low.

Experts say India is producing enough oxygen, at just over 7,000 tons a day. Most is for industrial use but can be diverted for medical purposes. The Indian government has now directed most of the country's supply of industrially produced oxygen toward the health care system.

Amid high demand, suppliers have been ramping up capacity to be able to produce more than 9,000 tons of medical oxygen by mid-May.

However, most oxygen producers are based in India's east, while the soaring demand has been in cities in the western and northern parts of the country.

"There is no centralized coordination of oxygen supply and distribution. It is completely haphazard and red tape has held back timely deliveries," Kumar Rahul, secretary in the health department of Punjab state, told DW.

Vikas Bajpai of the Progressive Medicos and Scientists Forum told DW that this is an extraordinary situation, and all government agencies must rise to the occasion. "The harsh reality is that the supply so far has been unable to meet the exponentially rising demand," he said.

To get the supplies where they are needed, Prime Minister Narendra Modi's government has launched "oxygen express" trains to ship the gas from production units to locations that need it nationwide. The Indian Air Force has also been airlifting oxygen from military bases.

Nevertheless, the country lacks enough transport and storage capacity. Liquid oxygen at very low temperatures has to be transported in cryogenic tankers to distributors, which then convert it into gas for filling cylinders. But India is short of cryogenic tankers.

"There are only a finite number of oxygen tankers and cylinders around. So, the logistics of refilling them and bringing them to the destination is a severe bottleneck," Meher Prakash of the Jawaharlal Nehru Centre for Advanced Scientific Research told DW.

The oxygen shortage has been a huge problem not only in cities, but also in small towns and villages where the health infrastructure is already extremely weak.

"Worryingly, there is little discussion about a COVID-19 strategy which factors in rural India's myriad constraints including oxygen availability," said Bajpai.

Over the past few days, emergency medical aid from foreign donors to alleviate the dire oxygen shortage has been arriving in India.

On Sunday, the US delivered the third of six aid shipments, including 1,000 oxygen cylinders. The UK donated more than 400 oxygen concentrators, and France sent eight oxygen generators, each of which can serve 250 hospitalized patients.

A German military aircraft with 120 ventilators also reached India on Saturday, and officials said plans were being made for additional flights with more supplies.

While the emergency aid could save lives, it seems not to have reached those who are gasping for oxygen.

So far, around 20 flights have arrived with aid, but the shipments have been stuck at customs for weeks, according to local media reports. Indian officials told DW that no domestic flights have taken off to carry the supplies to other parts of the country.

"Many states have not been informed by New Delhi about their share and what they will receive. State allotments have yet to be decided," a senior aviation official told DW.

Amid sharp and widespread criticism of the Modi government's handling of the health crisis, the Delhi High Court said on Sunday it would start punishing his government officials if they failed to provide a steady oxygen supply.

The court warned that it would start contempt proceedings if there was no compliance.

India's tally of coronavirus infections surged past 20 million on Tuesday, becoming the second nation after the United States to pass that grim milestone.

Health experts say the actual numbers in India could be five to 10 times higher than those reported.