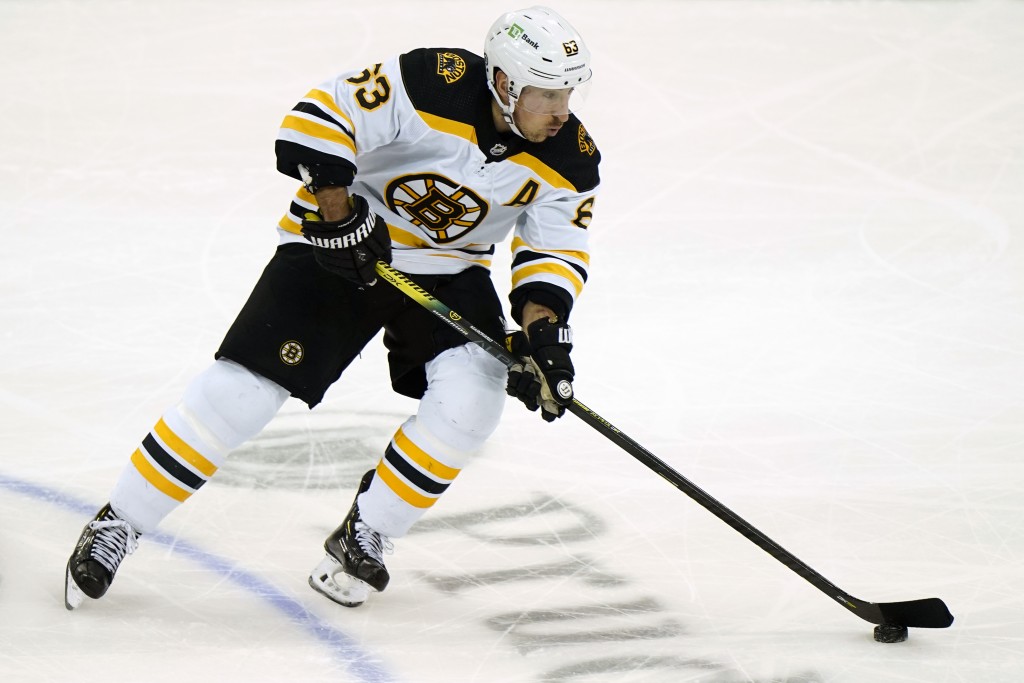 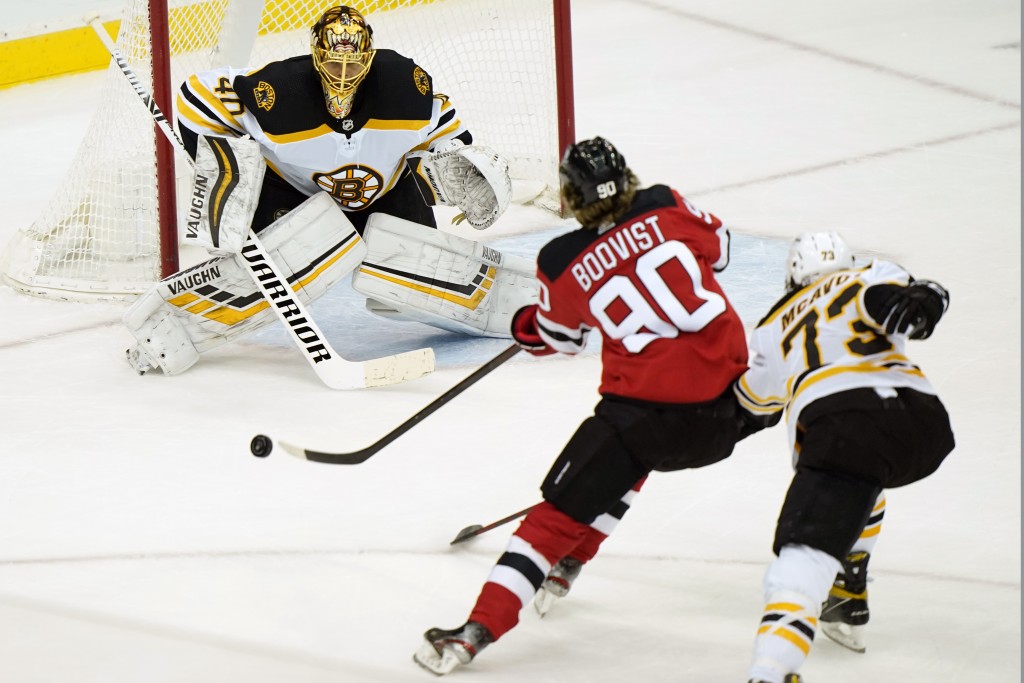 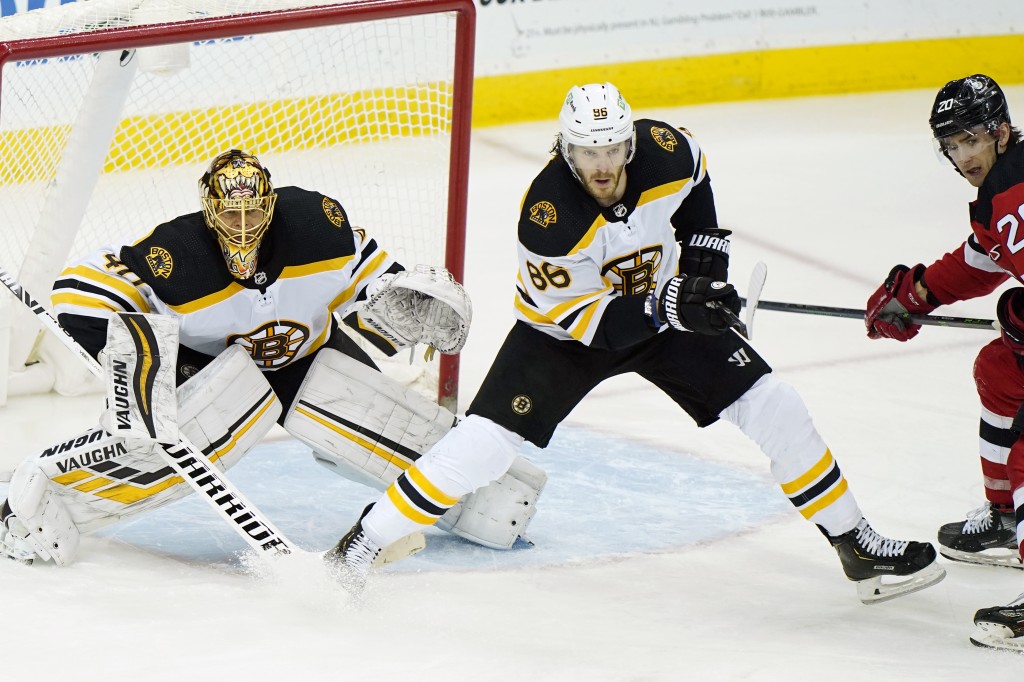 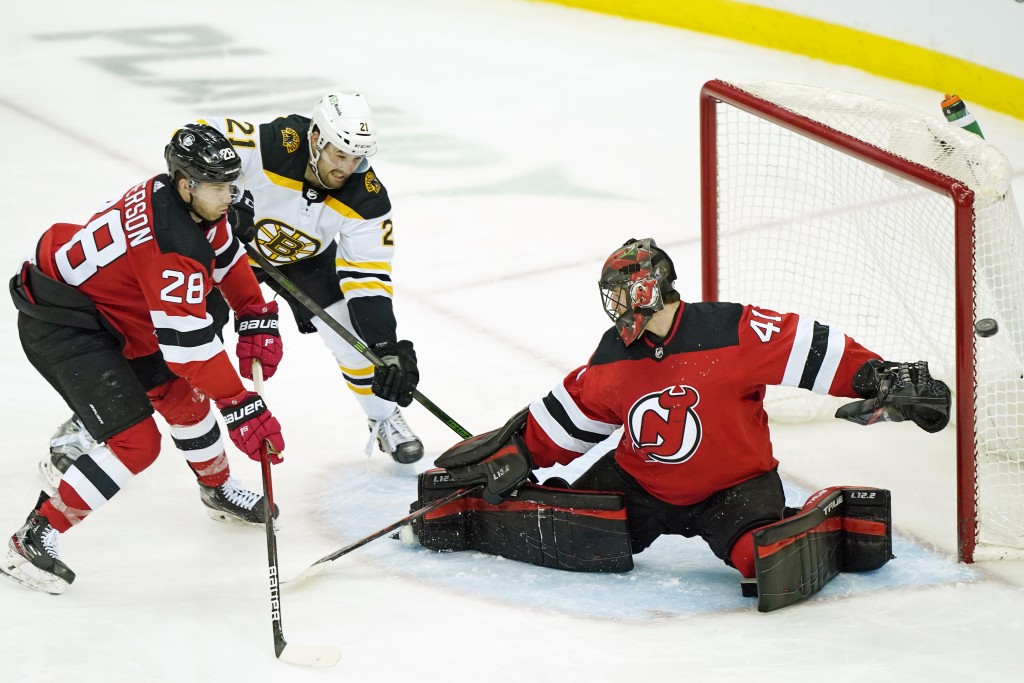 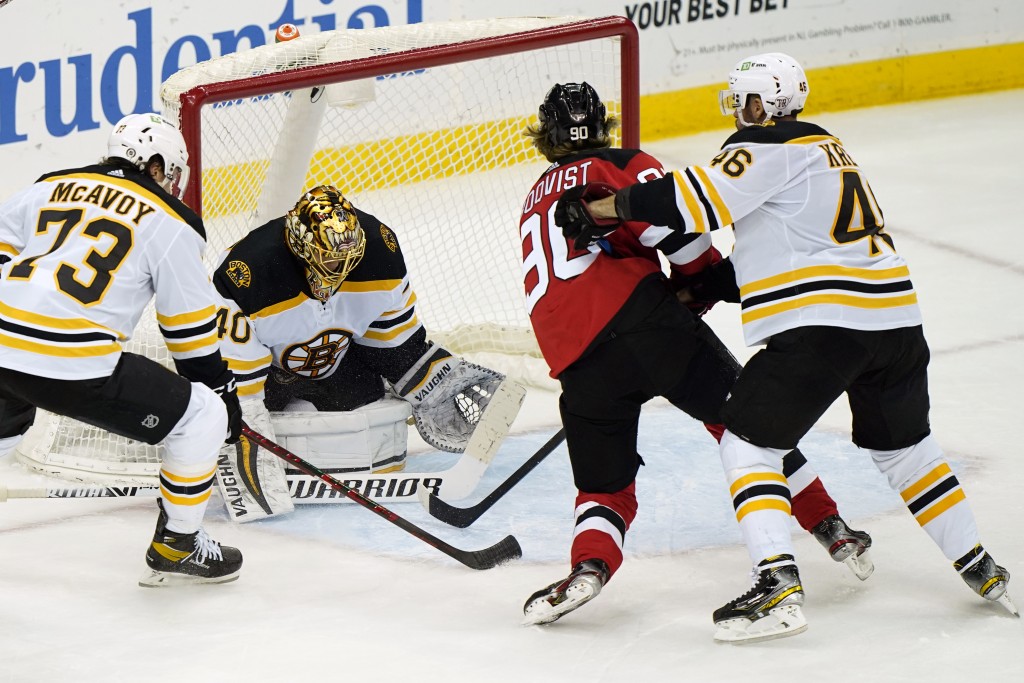 Tuukka Rask stopped 20 shots for his second shutout of the season and Nick Ritchie broke a scoreless tie in the second period as the Bruins won their fourth straight game and ended the Devils’ three-game winning streak.

Defenseman Matt Grzelcyk scored on a deflection off Devils defenseman Ryan Murray late as the Bruins won for the 10th time in 12 games. Brad Marchand, who was playing in his 800th NHL game, and Bergeron got the assists on the third goal.

NEW YORK (AP) — Daniel Sprong’s tiebreaking goal in the third period led Washington past the fading, who were knocked out of playoff contention.

Nic Dowd, Conor Sheary, Garnet Hathaway, Niklas Backstrom and Tom Wilson also scored for the Capitals as they snapped a two-game skid. Vitek Vanecek made 23 saves to earn the 19th win of his rookie season.

Alex Ovechkin returned to Washington's lineup after missing four games with a lower-body injury but went to the locker room after playing 39 seconds in the first period and did not return.

Nick Bonino added two goals and an assist, while Joel Eriksson Ek and Kevin Fiala also scored for Minnesota, which trailed by two goals twice in the game. Cam Talbot stopped 27 shots for the Wild, who have beat West-leading Las Vegas five times in the seven matchups this season.

Tage Thompson and Rasmund Asplund also scored for Buffalo. Houser spent the past 8 1/2 seasons in the minor leagues. It was his first game since March 7, 2020, with Cincinnati of the ECHL.

The Islanders fell to fourth place in the Eastern Division —one point behind Boston, which beat New Jersey 3-0. The Bruins also have a game in-hand on the Islanders.

PHILADELPHIA (AP) — Claude Giroux had two goals and an assist, Kevin Hayes gave Philadelphia a rare early lead, and the Flyers skated to an easy 7-2 victory over the first-place Pittsburgh Penguins on Monday night.

Joel Farabee had a goal and two assists and Shayne Gostisbehere, Wade Allison and Robert Hagg also scored for the Flyers, who snapped a three-game skid and won for just the sixth time in the last 16. Alex Lyon made 35 saves for his first victory in his fourth start.

Sidney Crosby and Jason Zucker scored for the Penguins, who fell into tie with Washington atop the East Division. The Capitals have four games left while Pittsburgh has three.

COLUMBUS, Ohio (AP) — Roman Josi scored his second goal of the game 3:24 into overtime and Nashville tightened its hold on a playoff spot.

Filip Forsberg and Ryan Johansen each had a goal and an assist, and Juuse Saros had 30 saves for Nashville.

The Predators are dueling with Dallas for the Central Division’s fourth playoff spot and increased their lead to four points with the Stars’ overtime loss to Florida on Monday night. Nashville has three games remaining and the Stars have four.

Emil Bemstrom scored three goals in the third to rally Columbus from a 3-0 deficit. Elvis Merzlikins had 34 saves for Columbus.

RALEIGH, N.C. (AP) —Sebastian Aho scored twice in the second period on the way to a hat trick, helping Carolina roll past Chicago.

Dougie Hamilton and Martin Necas also scored for the Hurricanes, who entered this game leading the race for the Presidents’ Trophy awarded to the team with the league’s best regular-season record.

Ian Mitchell and Alex DeBrincat scored for Chicago, which also had a goal from Philipp Kurashev disallowed on replay review because Pius Suter impaired Alex Nedeljkovic’s ability to play his crease position.

OTTAWA, Ontario (AP) — Nikita Zaitsev scored with 1:13 left in the third period to lift Ottawa to its sixth win in eight games.

Goaltender Filip Gustavsson was stellar in the win, stopping 28 shots while the Senators killed off all six of Winnipeg’s power-play chances. Connor Brown also scored and assisted on Zaitsev’s winning goal for Ottawa.

The rookie took a pass from Jeff Petry and wired home his second NHL goal — and second OT winner in two games.

Tyler Toffoli and Philip Danault scored in regulation for Montreal. Jake Allen made 27 stops for the Canadiens, who entered having won two in a row, including Saturday’s dramatic 2-1 overtime triumph at the Bell Centre against the Ottawa Senators when Caufield was also the star.

Petry and Nick Suzuki added three assists each on Monday.

Auston Matthews, with his league-leading 39th goal of the season, and Morgan Rielly scored for Toronto, which got 20 saves from Jack Campbell.

SUNRISE, Fla. (AP) — Aleksander Barkov scored 2:50 into overtime to lift the Florida Panthers to a 5-4 win over the Dallas Stars on Monday night.

Spencer Knight stopped 25 shots in his third career start and fourth appearance. Knight, who turned 20 on April 19th, is the youngest goalie in NHL history to start 4-0.

The Panthers are two points behind Carolina for first place in the Central Division and two points ahead of Tampa Bay. The Hurricanes and Lightning each have two games in hand over the Panthers.

Tyler Seguin scored a goal in his first game of the season, Roope Hintz had a goal and an assist, and Joe Kiviranta and Joe Pavelski also scored for Dallas. Anton Khudobin allowed four goals on 15 shots before being replaced by Jake Oettinger early in the second period. Oettinger finished with 27 saves.