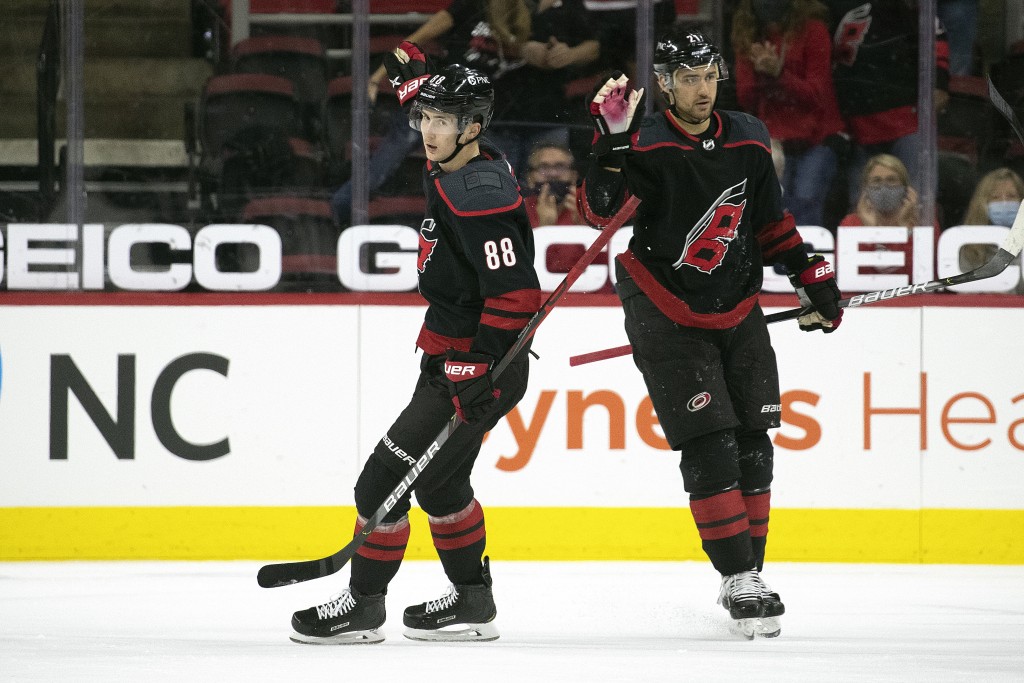 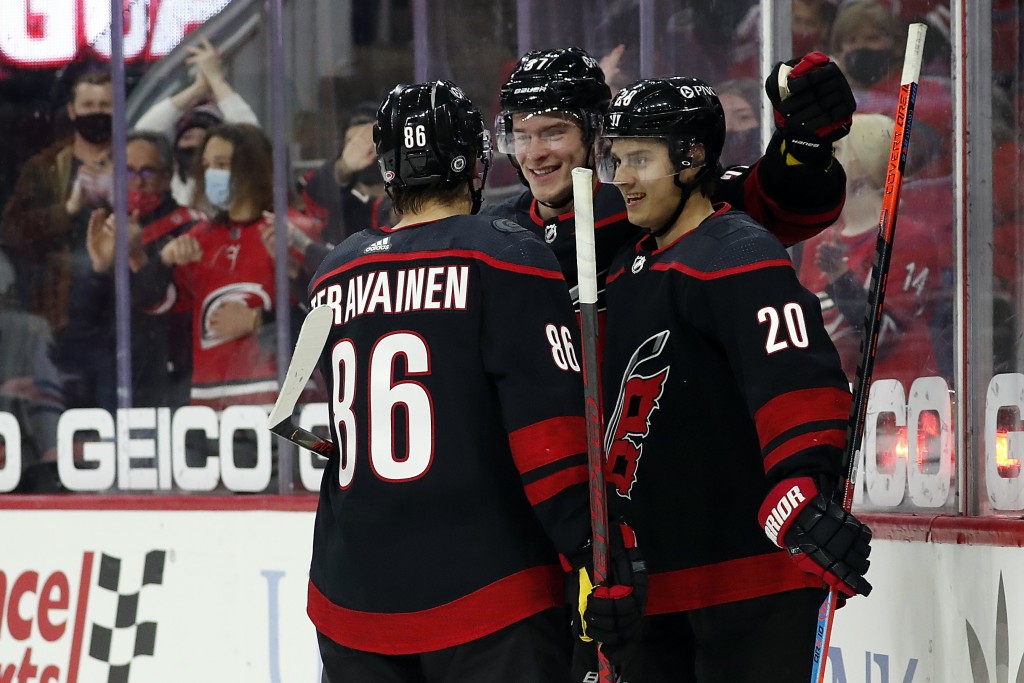 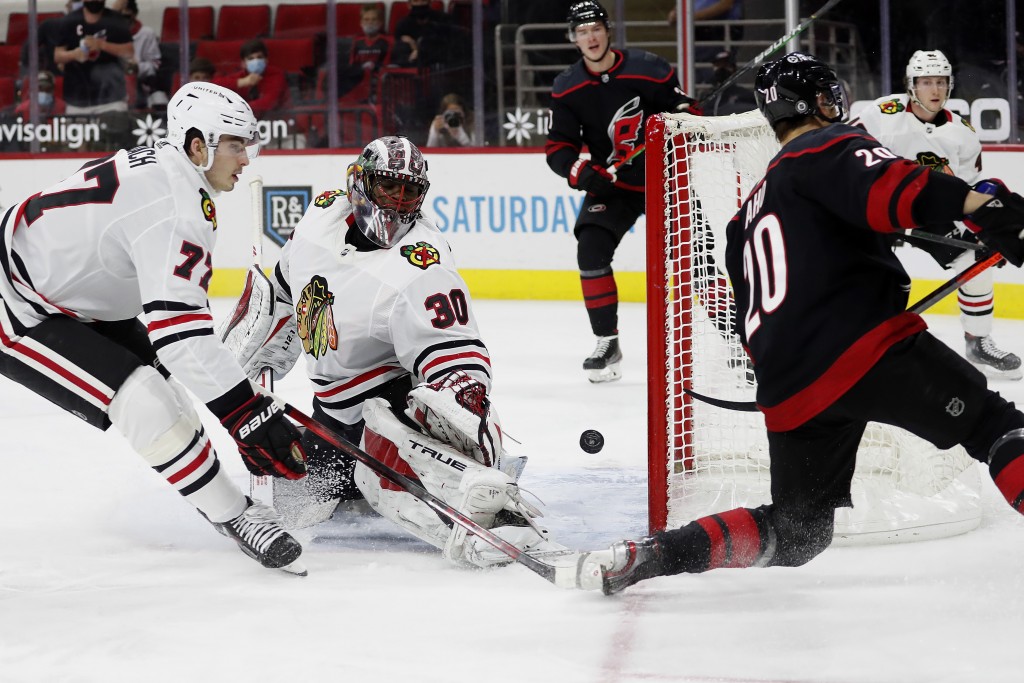 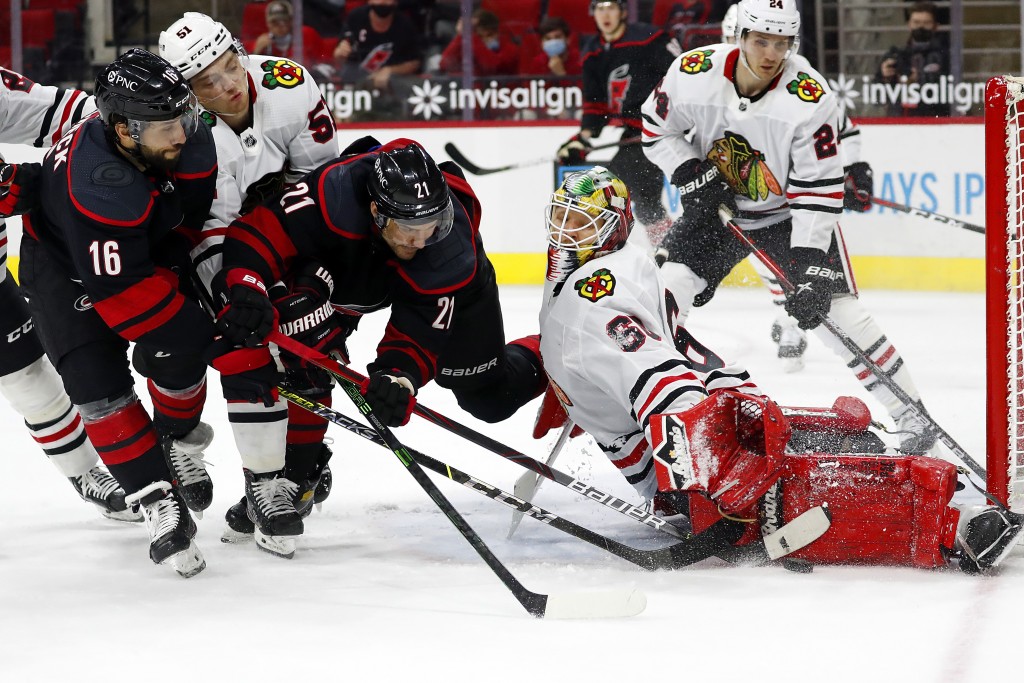 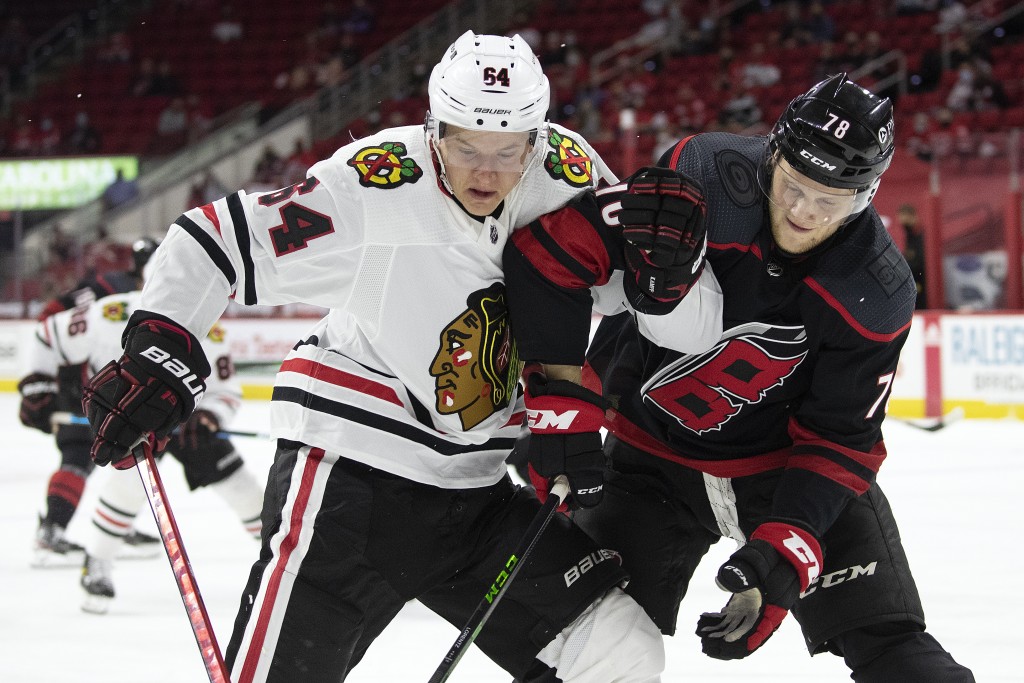 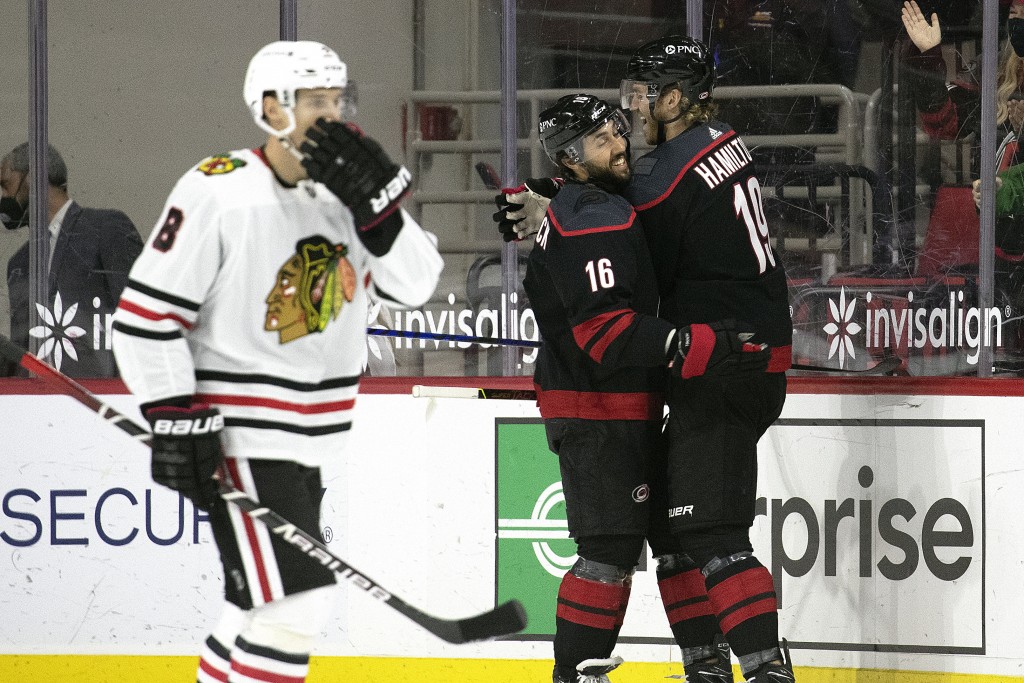 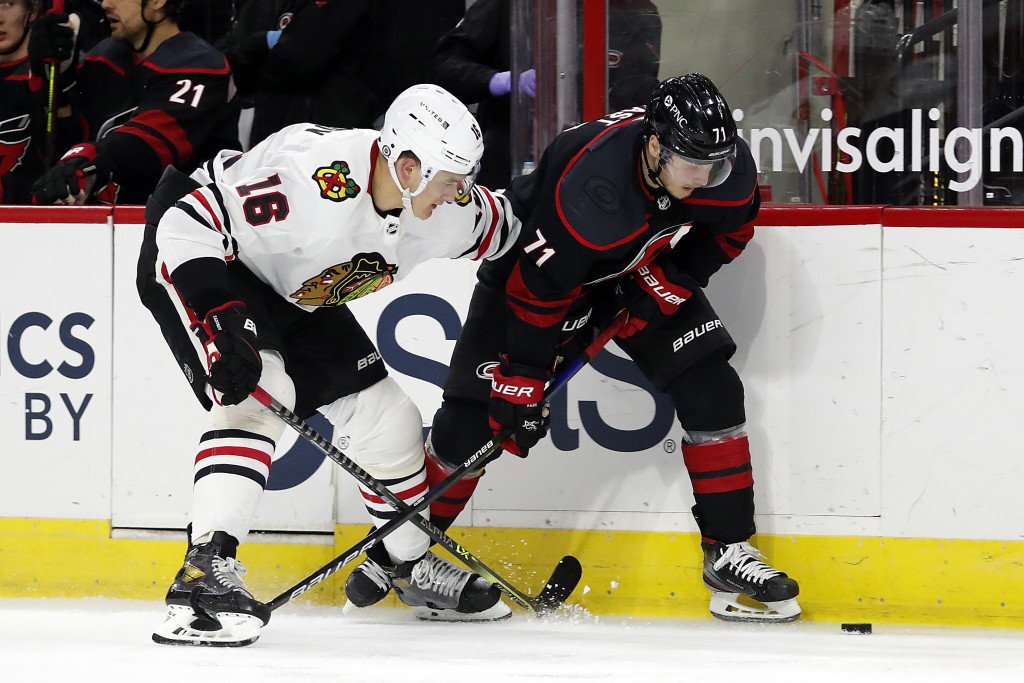 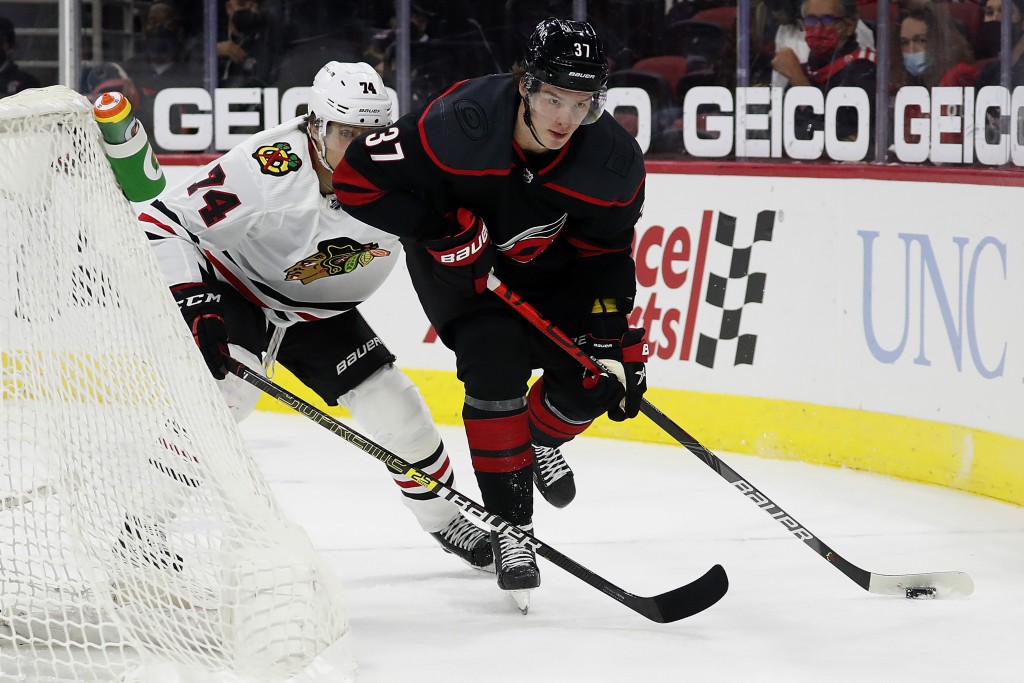 RALEIGH, N.C. (AP) — Sebastian Aho scored twice in the second period on the way to a hat trick, helping the Carolina Hurricanes rolled past the Chicago Blackhawks 5-2 on Monday night.

Dougie Hamilton and Martin Necas also scored for the Hurricanes, who entered this game leading the race for the Presidents’ Trophy awarded to the team with the league’s best regular-season record. They led nearly the entire way, going up 2-0 in the opening period and then getting Aho's scores to blow the game open on the way to a fourth straight victory.

Aho got his first when he buried a pass from Andrei Svechnikov — who stayed on his feet to lead a terrific charge up the middle of the ice for the 2-on-1 chance at 4:42 of the second.

Aho followed that minutes later by finding himself alone in front of the crease on the power play. That gave him time to set up and perfectly redirect the puck high past Malcolm Subban off a low pass from Hamilton.

That lifted Carolina to a 4-0 lead by midway through the period, pushed Aho's point streak to eight games and knocked Subban from the game in favor of Collin Delia.

Aho capped his night by beating Patrick Kane to a puck and scoring the empty-net putaway at 18:44 to earn the hat trick.

Ian Mitchell and Alex DeBrincat scored for Chicago, which also had a goal from Philipp Kurashev disallowed on replay review because Pius Suter impaired Alex Nedeljkovic's ability to play his crease position.

Chicago, sitting at sixth in the eight-team Central Division, has lost five straight and seven of nine.

The 23-year-old Aho had managed three goals and nine assists in his point streak entering Monday, a tear that had helped make him the Central Division Star of the Month for April.

Aho's streak had included five straight games with an assist.

Subban allowed allowed four goals on 18 shots before being pulled for Delia, who finished with 19 saves in his third appearance this year — and first since Jan. 17.

Carolina got winger Jesper Fast back after he missed five games with a lower-body injury. Fast saw more than 13 1/2 minutes of ice time.

Goaltender Petr Mrazek, who has missed the past six games with a lower-body injury, was the backup to Nedeljkovic on Monday night.

The teams meet Tuesday in the second game of a three-game set as the Hurricanes close their home schedule.