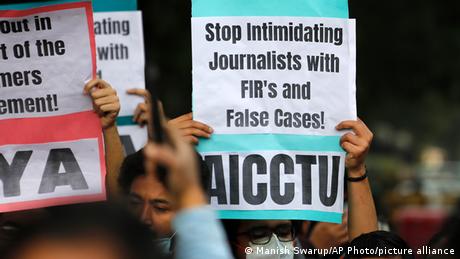 As the latest coronavirus wave ravages India in unprecedented ways, journalists are facing increasing crackdowns and constraints on their freedom of speech. While experts say the pandemic has accelerated official limitations on press across the region, the trend, however, has been consistent over the past years.

Several journalists have claimed that the Indian government is using the coronavirus crisis to suppress them.

"They are using COVID as an excuse for everything. Journalists are being far more intimidated now than they have been in the past and the pandemic is being used as a cover," Nidhi Razdan, former executive editor of NDTV, told DW.

India was ranked 142nd among 180 countries on the World Press Freedom Index 2021, for a second consecutive year.

The report, issued by Reporters Without Borders (RSF), calls India "one of the world's most dangerous countries for journalists," adding that pressure on the media to follow the Hindu nationalist government's agenda has increased since 2019.

Arrests made under sedition laws

In October last year, journalists reporting on the gang rape of a Dalit woman in Hathras, Uttar Pradesh, were denied access to the woman's village, with several reports of journalists being intimidated and manhandled by officials.

Journalist Siddique Kappan was on his way to Hathras when he was arrested and charged under the Unlawful Activities Prevention Act (UAPA).

He is among several journalists who have been arrested under the UAPA and other sedition laws since 2019. Several months after his arrest, Kappan was still being held in an Uttar Pradesh jail, where he contracted the coronavirus and was reportedly chained to his hospital bed while receiving treatment.

Press freedom has also taken a hit in India-administred-Kashmir. While media curbs are not new to the conflict-stricken region, journalists say the conditions have become harsher since the abrogation of the state's semi-autonomous status in 2019.

"Before 2019, there were attacks on media offices and raids, but individually as a journalist you were able to work," Fahad Shah, editor of The Kashmir Walla, told DW. "We did not expect that the clampdown would be so brutal."

Shah has been summoned for questioning or detained six times in the last year. In one instance, he was held at gunpoint by police. He said things became even worse with the implementation of a new media policy in 2020.

"Journalists started getting booked under UAPA for Facebook posts … This has made it clear that the free press does not have a space in Kashmir anymore," Shah said.

In addition to virus-related curbs and declining press freedom in Kashmir, many female journalists in India are also continually targeted on social media, facing both death and rape threats.

"You do see women journalists, in particular, becoming the target of harassment and abuse, misogyny and trolling," Razdan said.

Freedom on the decline in Bangladesh

Journalists in Bangladesh are also facing increasing curbs on their freedom of speech, with frequent arrests and attacks while covering political events. The World Press Freedom Index ranks Bangladesh at 152, down from 144 in 2016.

According to RSF, at least two journalists have been killed in the country this year. Borhan Uddin Muzakkir, a newspaper reporter in the southeastern city of Noakhali, died after being shot in the neck while covering clashes between rival factions of the country's ruling Awami League party in February.

Five days after the incident, Mushtaq Ahmed, a writer arrested last year under the country's controversial Digital Security Act (DSA) for criticizing the government's response to the coronavirus pandemic on Facebook, died in prison in Dhaka. He was allegedly tortured while in custody, and his petition for bail was rejected several times.

"At least 17 journalists and bloggers were killed in Bangladesh in the past decade. The number of injured reporters is so much higher that it is hard to produce a relevant figure," Daniel Bastard, RSF's Asia-Pacific director, told DW.

Culture of impunity creates a climate of fear

In March, Bangladesh saw violent protests during a visit made by Indian Prime Minister Narendra Modi to celebrate the 50th anniversary of Bangladeshi independence. At least 40 journalists were attacked during the anti-Modi protests, but none of the perpetrators were brought to justice.

Local newspaper reports suggest the Islamist group Hefazat-e-Islam, the ruling Awami League and police officers were involved in the attacks on the reporters on duty at that time.

"Bangladeshi reporters lack safety while they are on duty and are exposed to high levels of violence," said Bastard.

"The root cause of the decline in press freedom in Bangladesh is the systematic assault on civic freedoms in the country under the Sheikh Hasina regime," Benedict told DW.

Both experts said the country's Digital Security Act, which was passed in 2018 and allows security forces to carry out arrests without a warrant of anyone criticizing the government online, is a threat to press freedom.


However, Anisul Huq, Bangladesh's law minister, said his government has no plans to scrap the measure.

"We need it to ensure the digital safety of our people," said Huq.

Meanwhile, the outlook for journalists in Pakistan is not much brighter. Prime Minister Imran Khan has said that the media in Pakistan enjoys more freedom than in the United Kingdom, but many media professionals refute that claim.

Nasir Zaidi, the secretary-general of Pakistan Federal Union of Journalists, said journalists face severe repression and censorship in the country. Seven media workers have been killed since January, while several others have been killed or arrested in the previous years as well, Zaidi told DW

Pakistan was ranked 145th on the World Press Freedom Index this year, slipping further from its former rank of 142.

"Journalists are being punished for being objective," journalist Fauzia Shahid told DW.

Journalist Nasir Malick, a vocal critic of the military, believes that media workers are relatively free to criticize politicians, but objective reporting on the country's defense budget and other matters can jeopardize their lives, he said.

Female journalists have also been targeted, with threats of rape, abduction, murder and smear campaigns which have jeopardized their lives and forced some to give up their careers.

"It is difficult to say who is behind these smear campaigns but most of these come from the people who are allegedly supported by intelligence agencies," said Gharida Farooqi, a prominent television anchor.