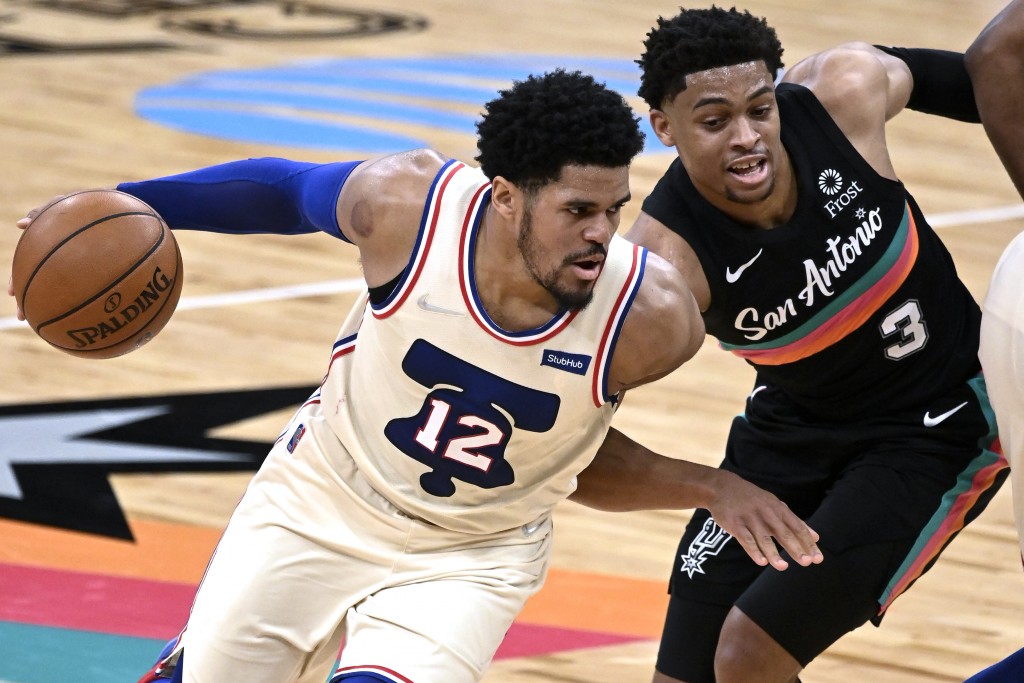 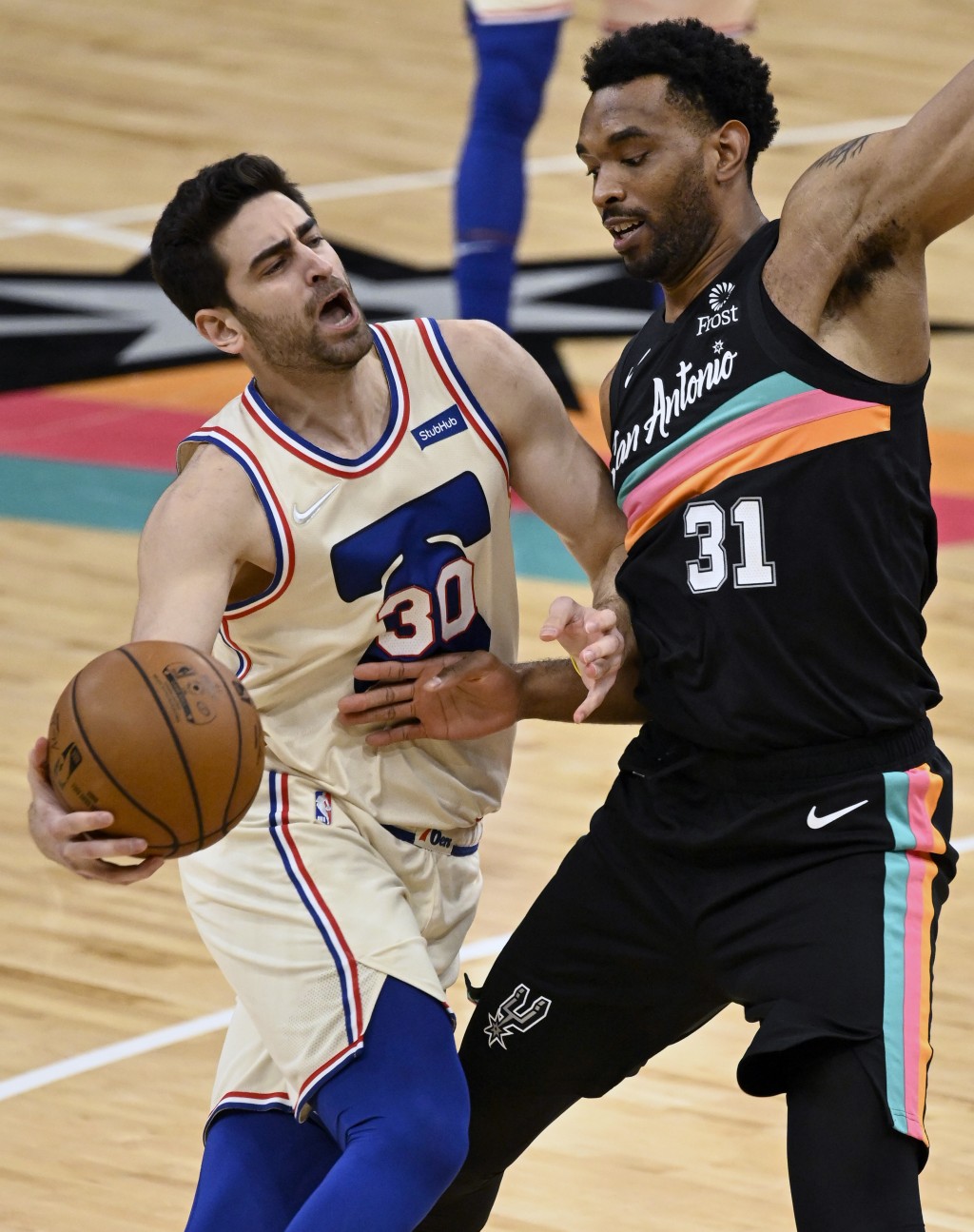 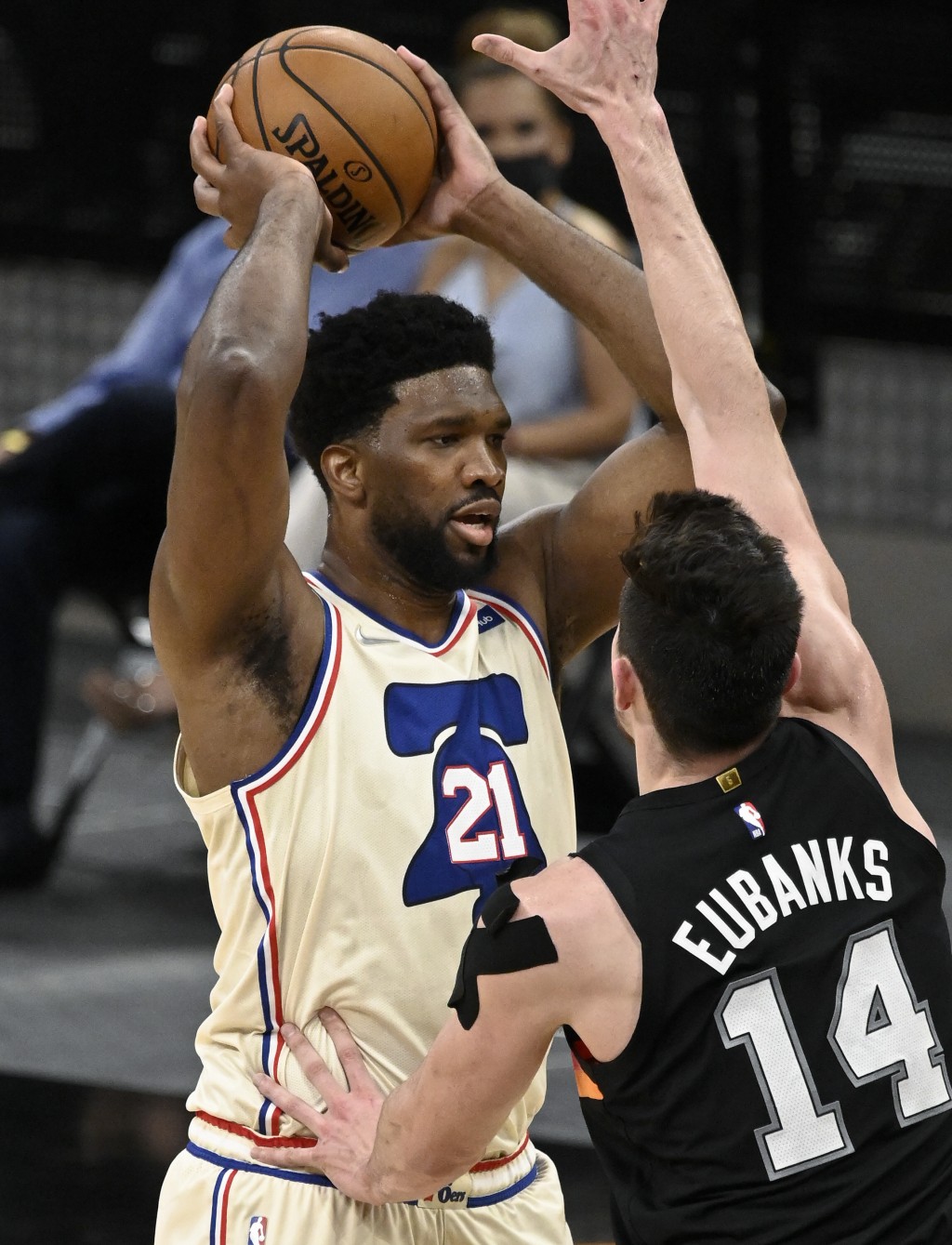 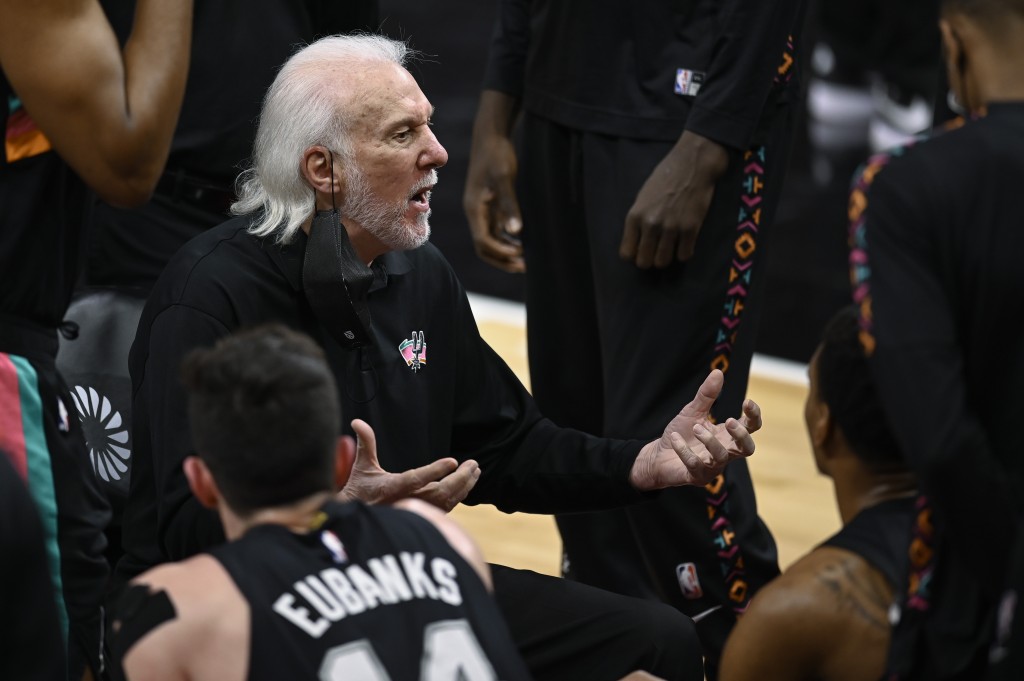 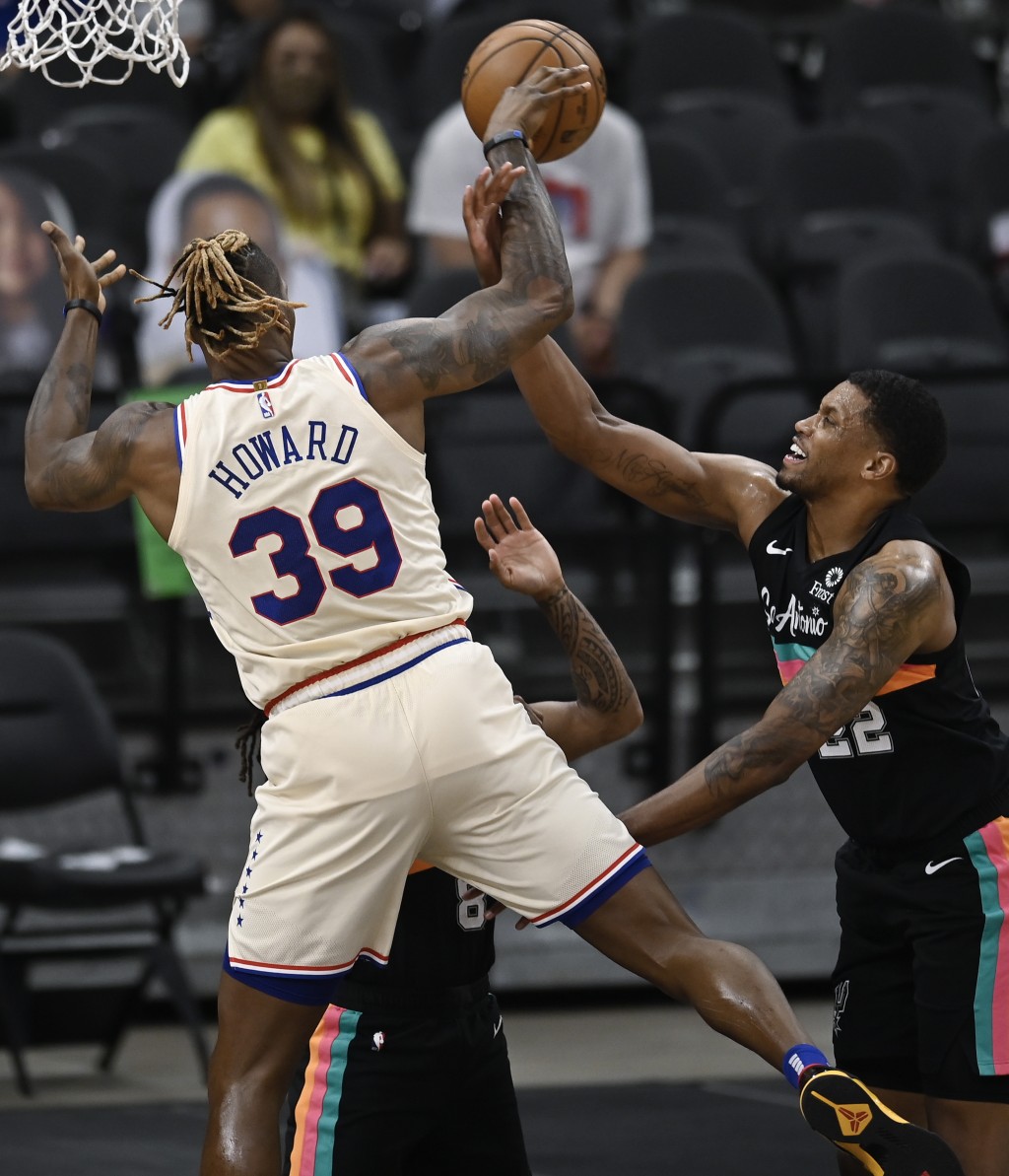 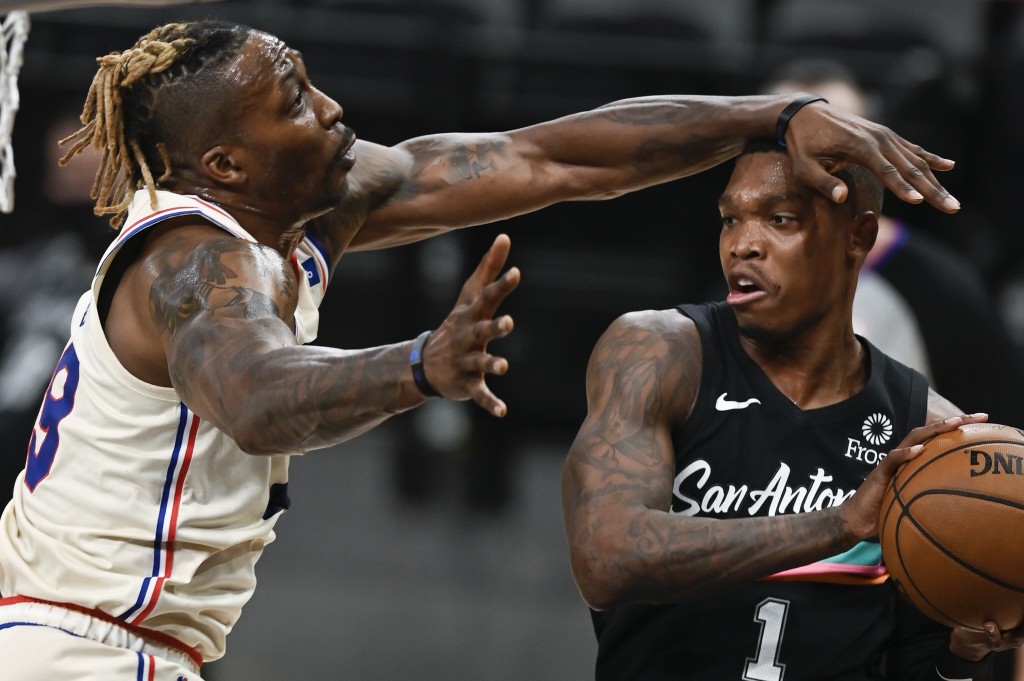 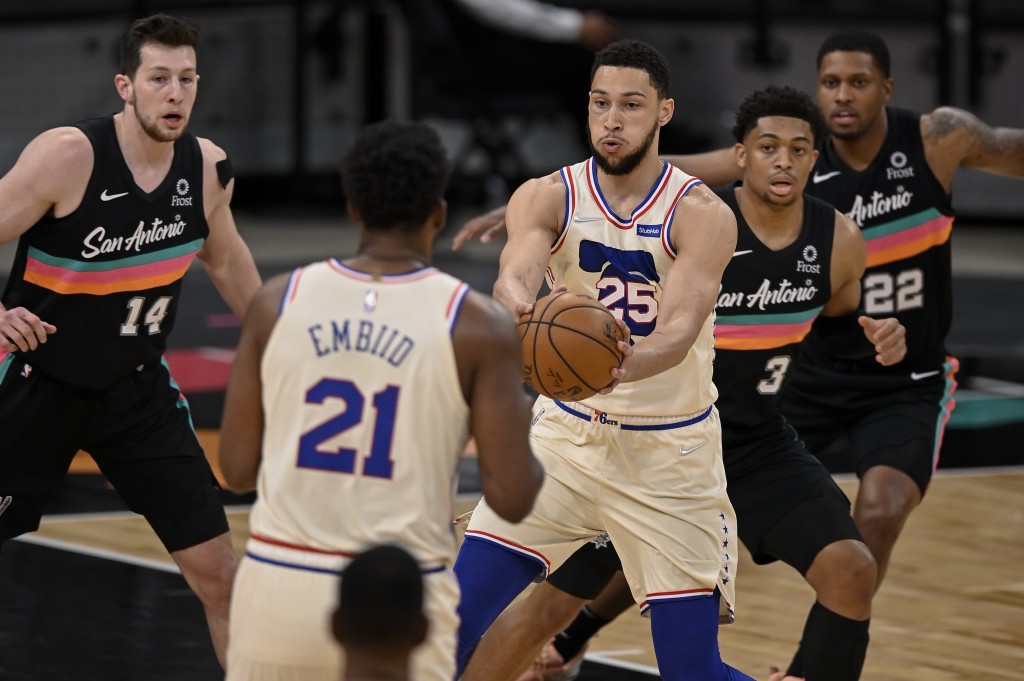 SAN ANTONIO (AP) — Joel Embiid had 34 points and 12 rebounds, and the Philadelphia 76ers held on to beat the undermanned San Antonio Spurs 113-111 in overtime Sunday night.

Ben Simmons tipped in the game-winner off a miss from Embiid as time expired. Embiid had four points in overtime, all on free throws.

The Spurs were without four starters as Dejounte Murray and Derrick White missed the game due to injuries and DeMar DeRozan and Jakob Poeltl sat out for rest.

San Antonio tied the game at 102 on Gay’s 3-pointer with 2:37 remaining in regulation. The Sixers reclaimed the lead on the ensuing possession with a 3-pointer by Curry only to watch Johnson hit another game-tying 3.

Embiid and Johnson muscled their way into the lane to keep the game tied at 107 with 1:03 remaining. After Matisse Thybulle blocked Patty Mills’ 3-point attempt, Embiid missed a fade-away jumper from 15 feet to send the game to overtime.

Both teams struggled offensively in overtime, combining to score just nine points on 3-for-11 shooting.

San Antonio employed a zone defense early to counter a stronger Philadelphia starting lineup, but Embiid ruined that strategy. The Sixers’ wings found holes in the zone and either passed to Embiid or the 76ers center gathered and followed up a missed shot. Embiid had 13 points in the first quarter, including 12 in the paint.

Both teams were playing the opener of a back-to-back with the Spurs traveling to face the Utah Jazz on Monday while the 76ers play at Chicago.

Sunday’s game in San Antonio was the start of five games in seven days for Philadelphia.

Even though the Spurs were missing four starters, Sixers coach Doc Rivers chose not to rest anyone. He was asked what factors into his decision to rest players and if the standings play a part.

“Just our health,” Rivers said. “We want to keep guys healthy at the end of the day. We want to win games. We want to get them the proper amount of rest. We obviously have a plan on what we want to do, and so we’ll follow it. We’re not going to look at the standings or anything like that to decide what we’re going to do; I can say that.”

76ers: Former Spurs guard Danny Green received a warm welcome from the limited capacity crowd. Green spent eight seasons with San Antonio beginning in 2011 before being traded to Toronto in 2018 along with Kawhi Leonard for DeRozan and Poeltl. … The Sixers had no injuries to report. … Howard had three blocks, including a pair in the first quarter were the Spurs essentially ran into his outstretched arms.

Spurs: Murray missed the game with a sore left knee. San Antonio coach Gregg Popovich was asked if the issue was minor, Popovich said “I hope so and I think so.” … Tre Jones made his first career start in his 30th appearance as a rookie. Jones entered averaging 1.9 points and 0.7 assists in 5.4 minutes per game.

76ers: At the Chicago Bulls on Monday.

Spurs: At the Utah Jazz on Monday.