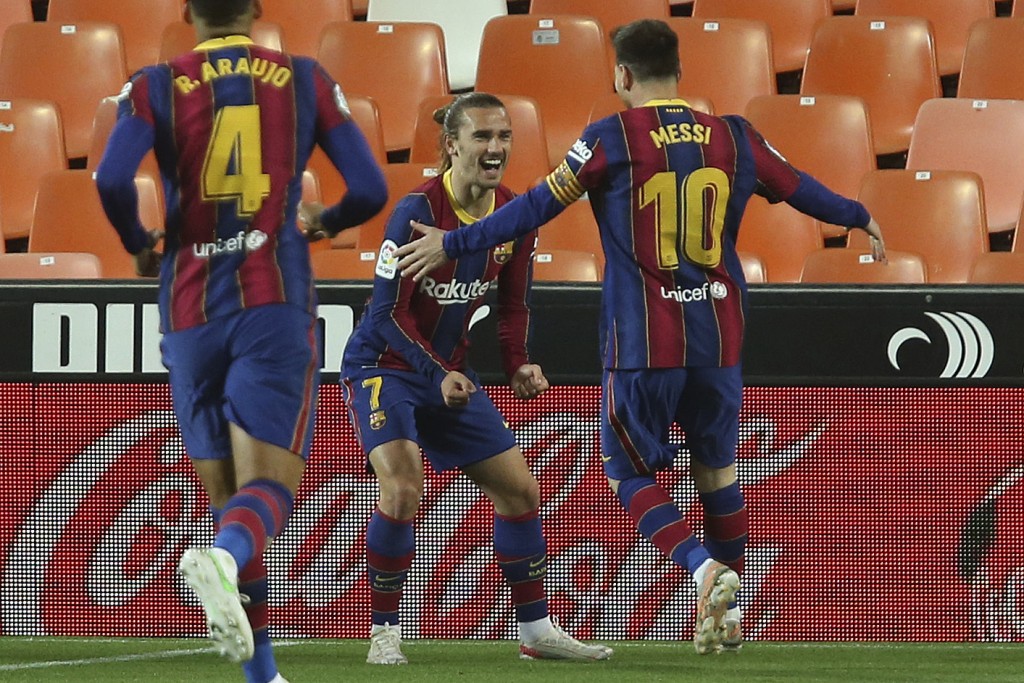 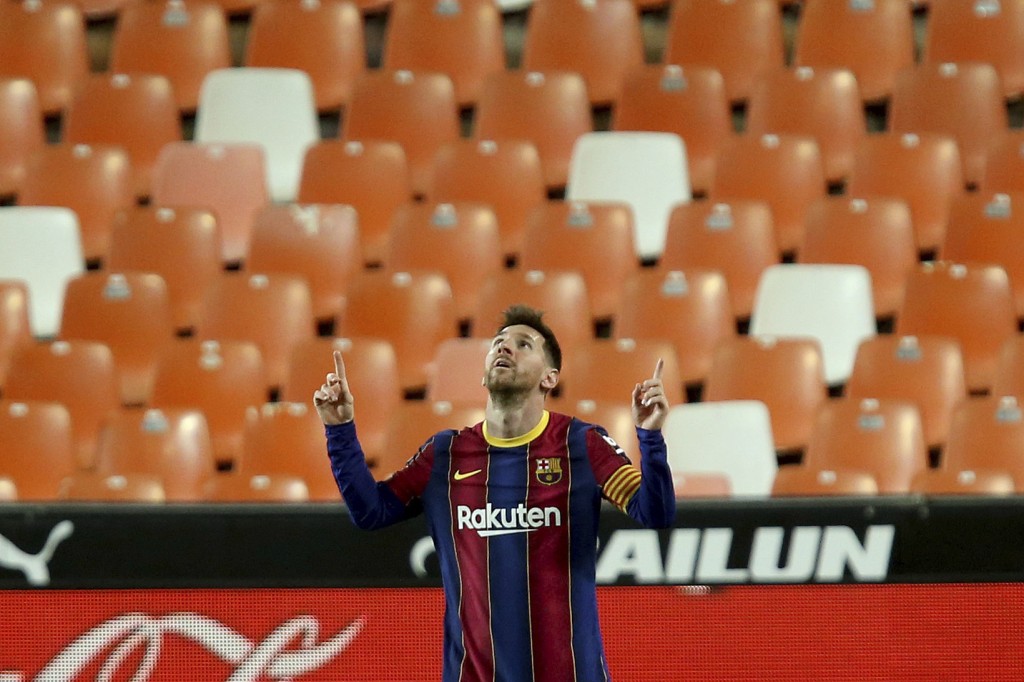 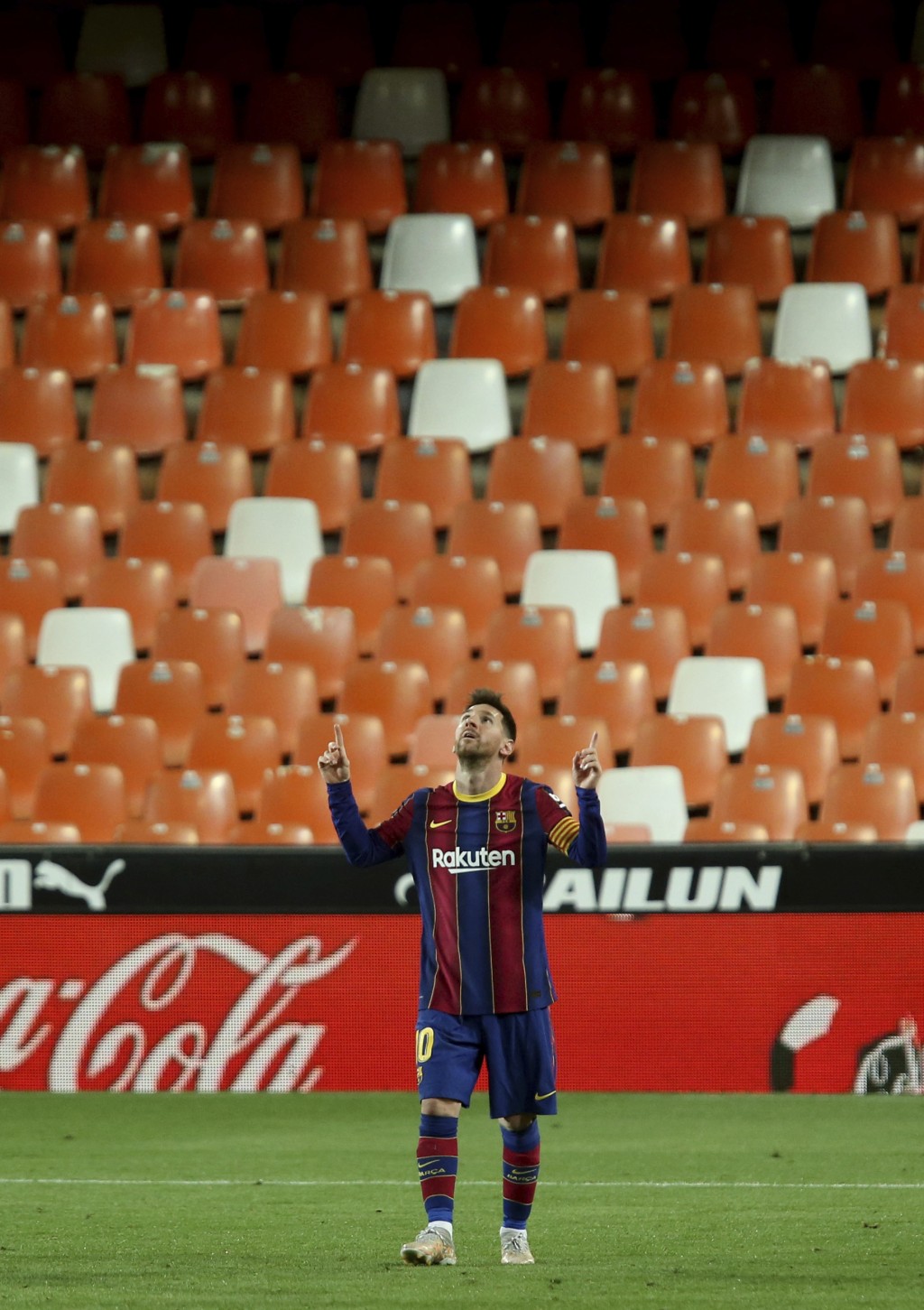 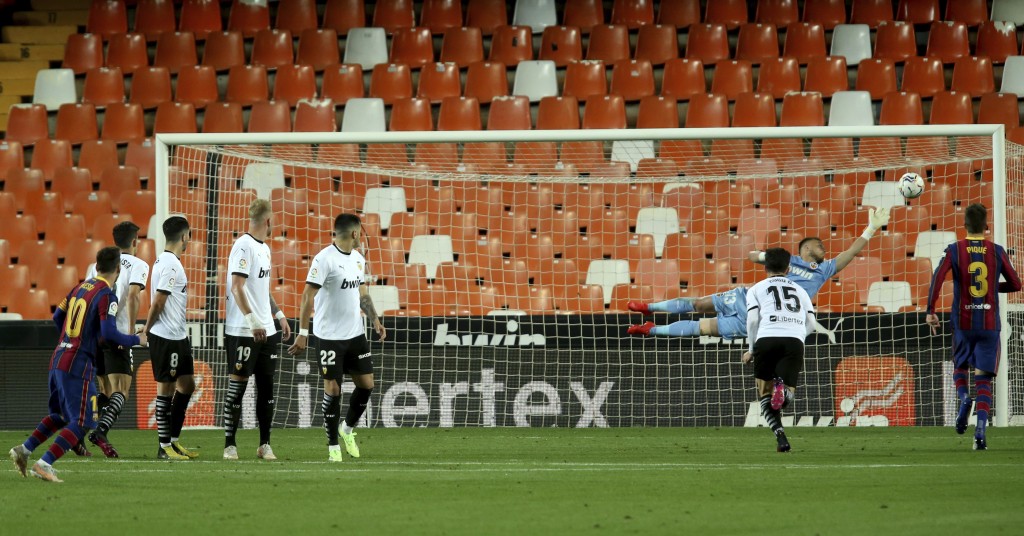 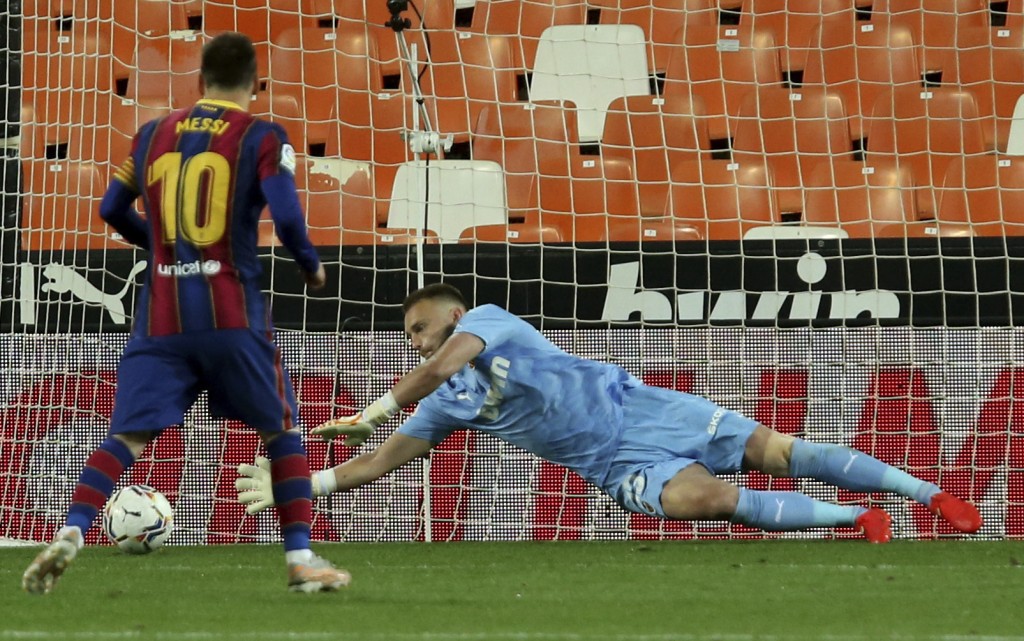 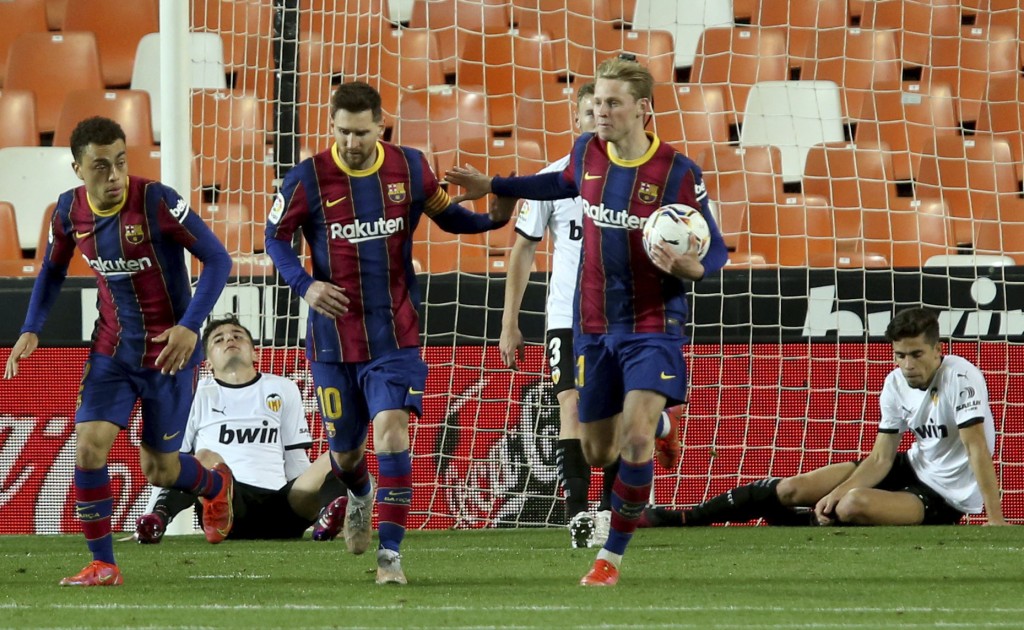 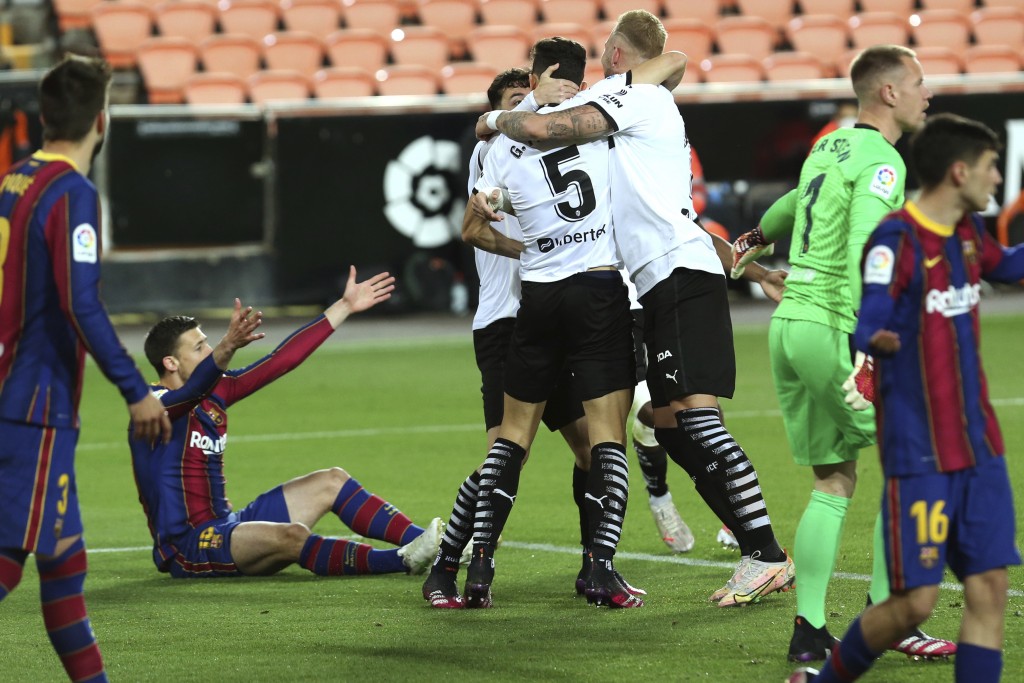 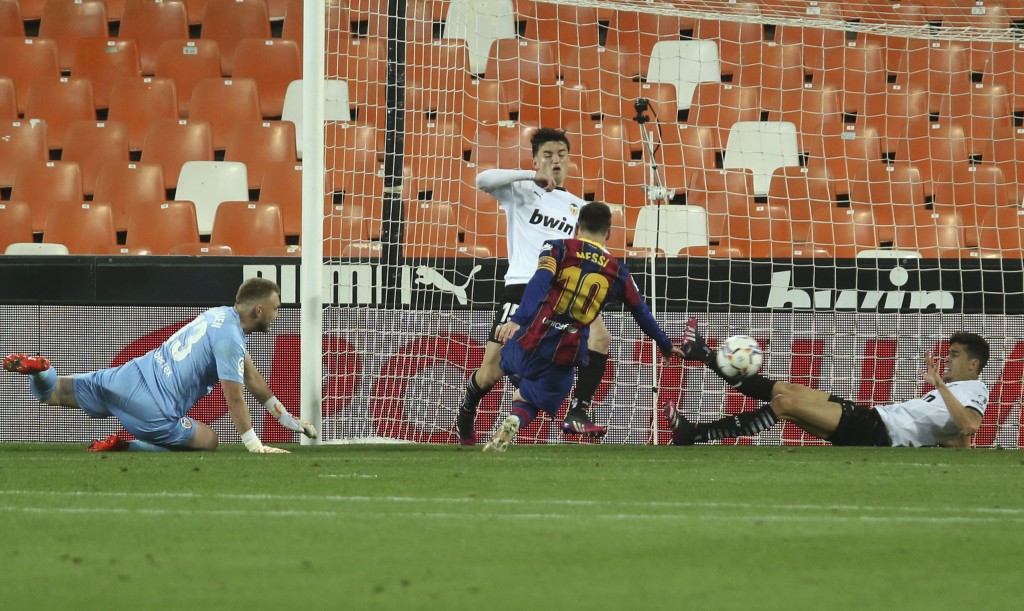 MADRID (AP) — Lionel Messi helped to keep Barcelona near the top of the Spanish league on Sunday, scoring two second-half goals in a 3-2 win over Valencia.

The away victory moved Barcelona within two points of leader Atlético Madrid ahead of their match at the Camp Nou Stadium next weekend. A win will give Ronald Koeman’s team the league lead for the first time this season.

Antoine Griezmann also scored for Barcelona, which is tied on points with second-place Madrid with four rounds to go. Madrid has a better head-to-head tiebreaker against both rivals at the top. Sevilla also remains in the title race. It can move within three points of the lead if it beats Athletic Bilbao at home on Monday. Sevilla visits Madrid next weekend.

Barcelona made the trip to Valencia under pressure after both Atlético and Madrid won their matches on Saturday — Atlético edged Elche 1-0 and Madrid defeated Osasuna 2-0. The Catalan club was coming off a shock 2-1 home loss to Granada on Thursday, when it could have grabbed sole possession of the lead.

The pressure increased Sunday after Valencia opened the scoring at the Mestalla Stadium with Gabriel Paulista's goal in the 50th minute. The midfielder beat Barcelona defender Clément Lenglet to the ball for an easy header by the far post. Video review was used to check on a possible foul away from the ball but the goal stood.

The Argentina star equalized in the 57th in the fallout of his own penalty kick after his poor shot from the spot was saved by Valencia goalkeeper Jasper Cillessen. Barcelona midfielders Sergio Busquets and Pedri González both had attempts before Messi got to the loose ball and scored from close range.

Griezmann netted the go-ahead goal six minutes later off another save from Cillessen. The former Barcelona goalkeeper stopped a header from Frenkie De Jong but Griezmann came in unmarked to score easily.

Messi’s second goal came with a beautifully struck free kick that curled over the wall and hit the post before going into the net in the 69th. Messi increased his tally at the top of the league’s scoring charts, leaving him on 28 goals.

Valencia pulled one closer with a long-range strike by Carlos Soler in the 83rd but it couldn't find the equalizer.

Villarreal moved to sixth place by beating Getafe 1-0 at home thanks to a late winner from Yéremi Pino. Villarreal coach Unai Emery rested some regular starters ahead of the second leg of the Europa League semifinals against Arsenal on Thursday. The Spanish club won the first leg 2-1 at home.

Seventh-place Real Betis was held 1-1 at relegation-threatened Valladolid, while Granada followed its surprise win over Barcelona with a 1-0 home loss against Cádiz.