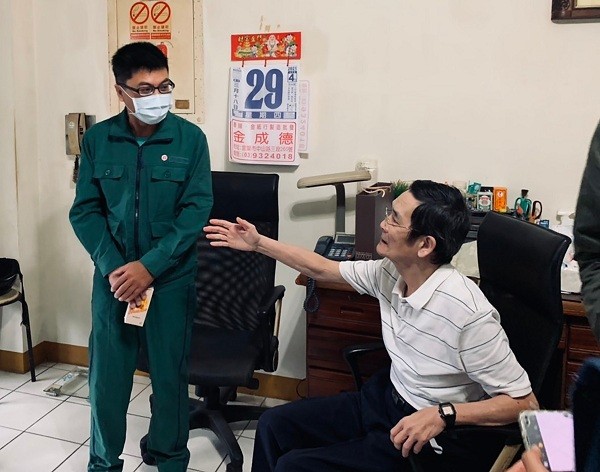 TAIPEI (Taiwan News) — A mailman in Yilan County delivered not just mail but also possibly life-saving help to a man who fell unconscious in front of his home on April 27.

A 60-year-old Yilan City resident, surnamed Chang (張), suddenly passed out in front of his house on April 27 when he was going out to get a haircut, CNA reported. Yilan Post Office mailman Hong Hung-yi (洪煌毅) was working at the time and immediately came to Chang’s rescue.

Hong called out to the unconscious man several times, which finally awoke Chang. He then helped Chang into his home to rest.

The mailman then contacted Chang’s family, who later accompanied their relative to seek treatment at a hospital.

After that, Hong continued to deliver mail without reporting the incident to his supervisors. However, the post office was informed by Chang of the mailman’s good deeds.

On April 29, Yilan Post Office representatives went with Hong to visit Chang and see how he was doing.

Chang recalled what happened, saying he did not know why he fainted. He called Hong “the green angel” and thanked him for his timely assistance.

“Everybody would do it under the same circumstances,” the mailman said, adding he gives a helping hand to anyone in a similar situation while delivering mail. It is no effort at all and will not seriously interfere with work, he added.

The post office said Hong is a 16-year veteran at the office and a hard worker.