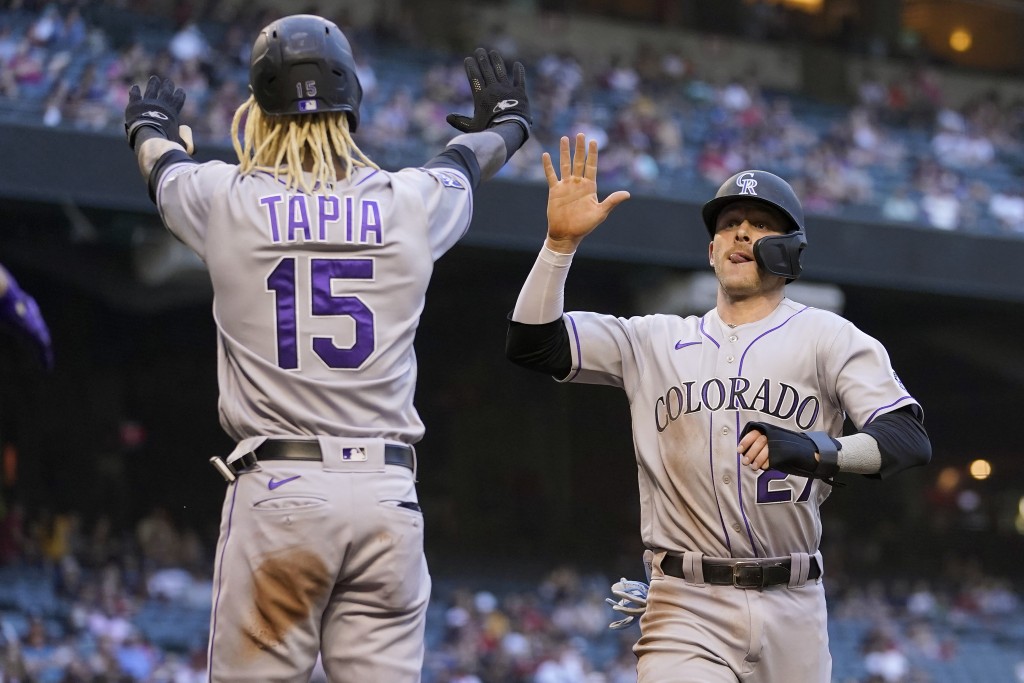 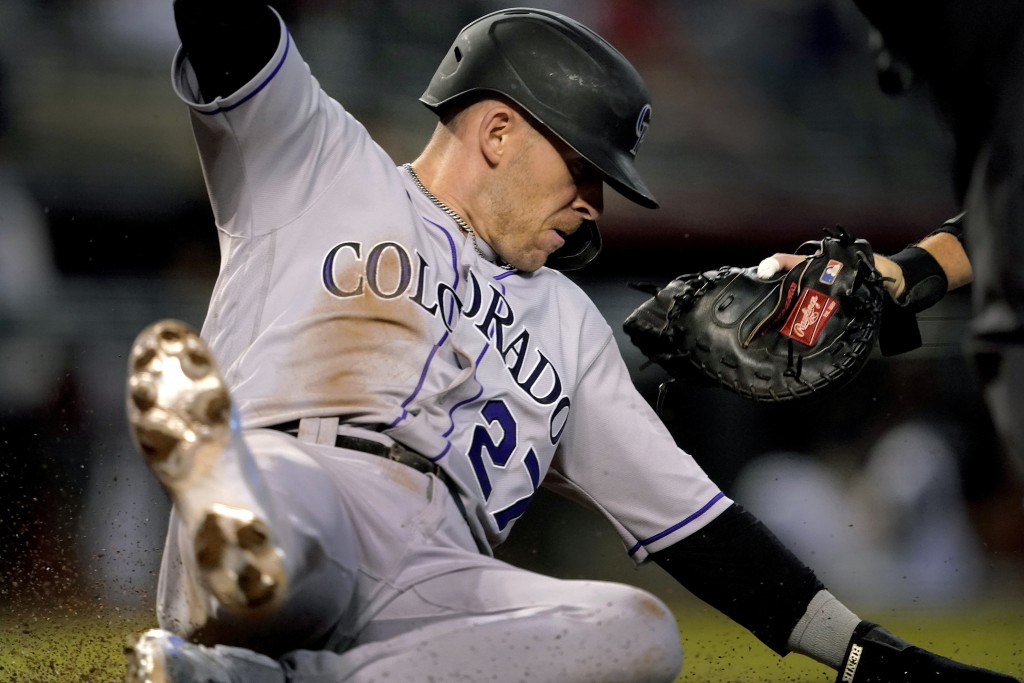 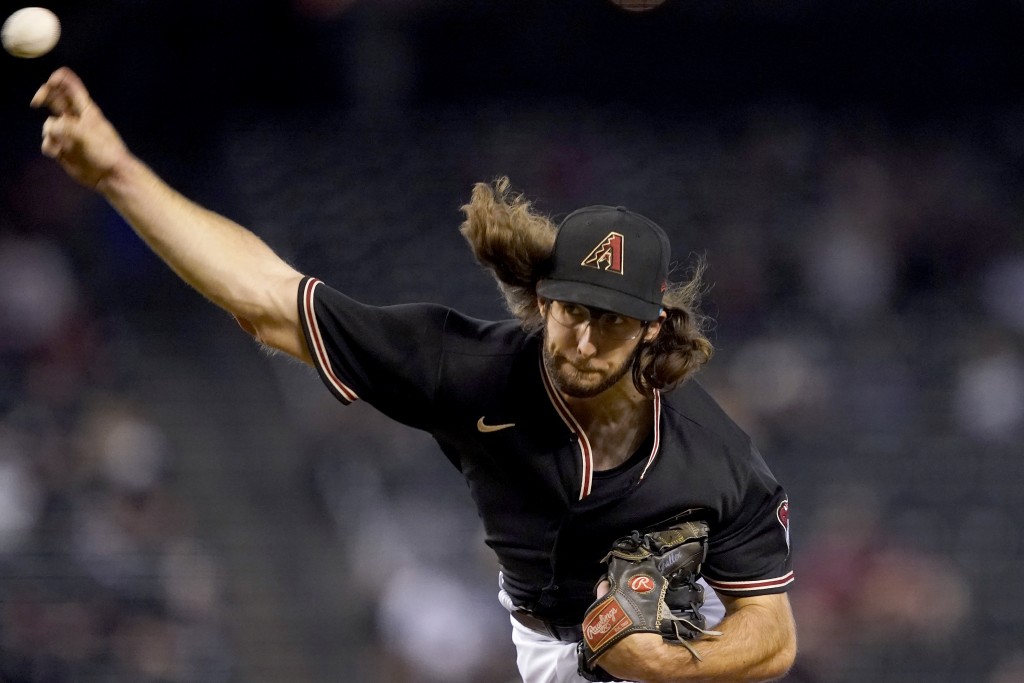 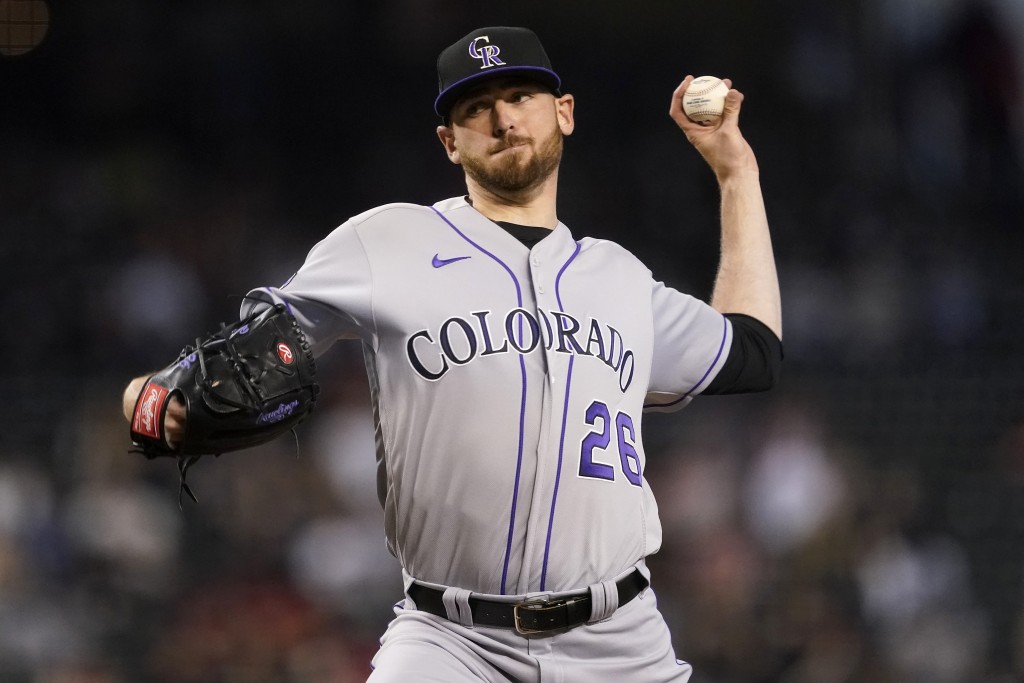 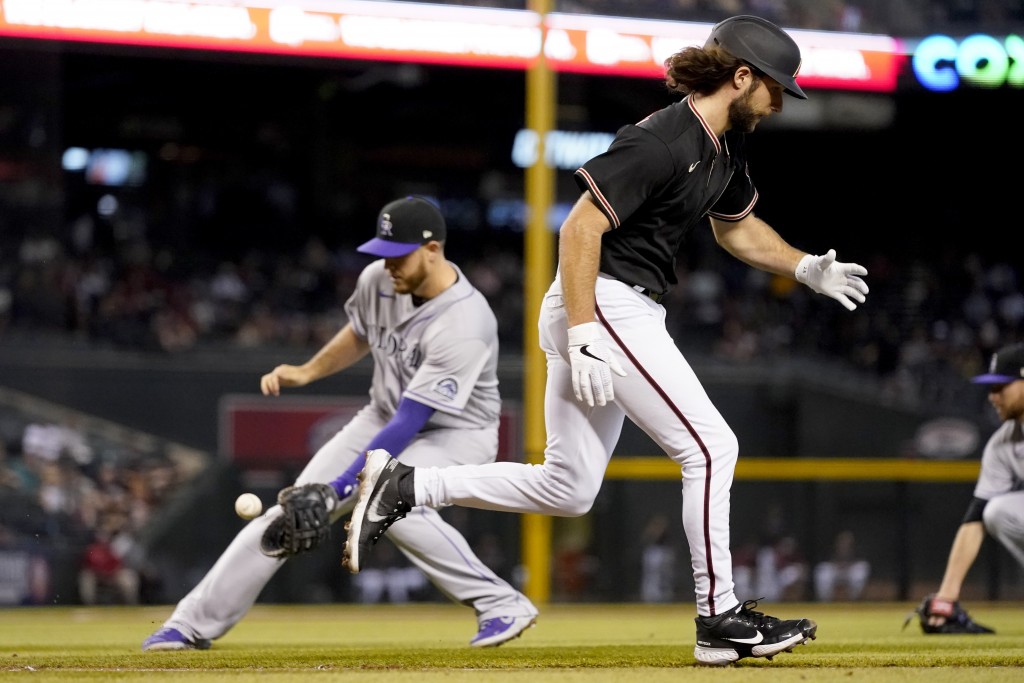 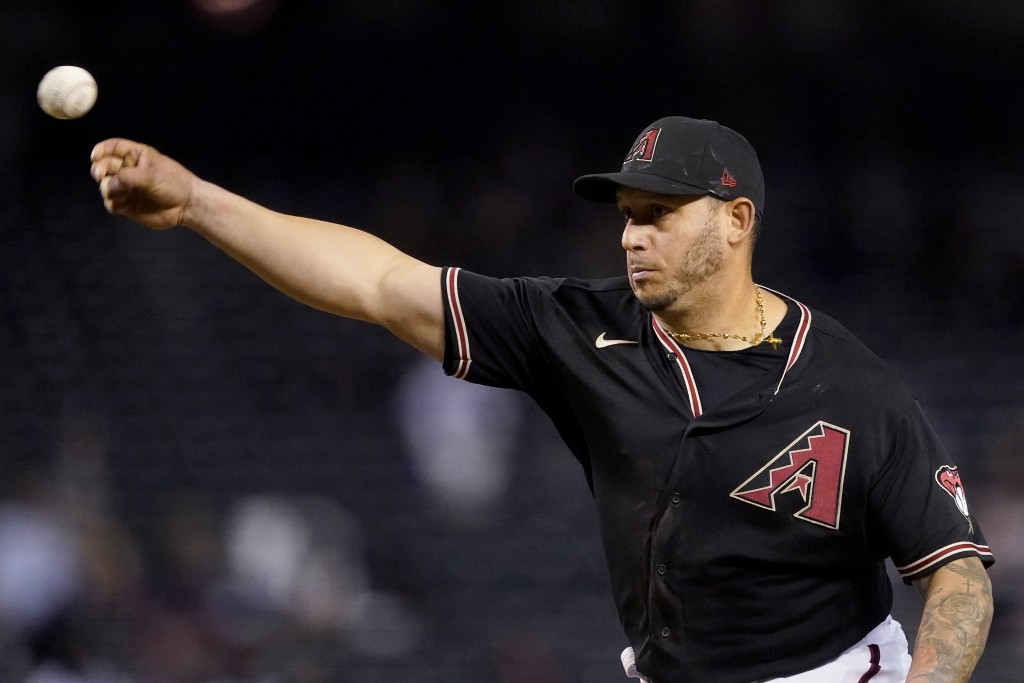 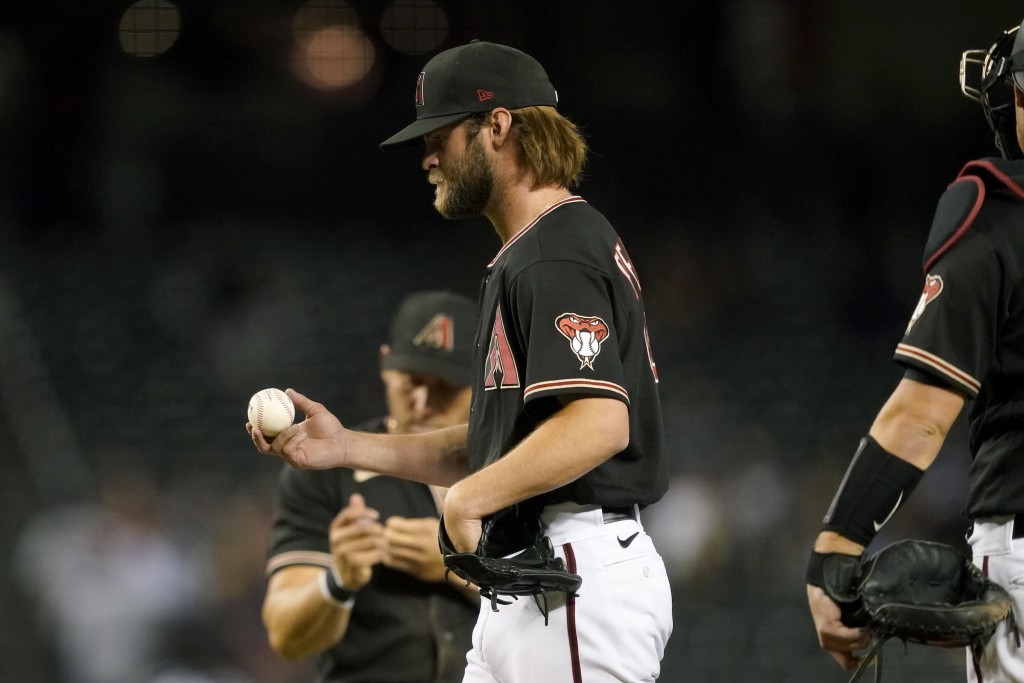 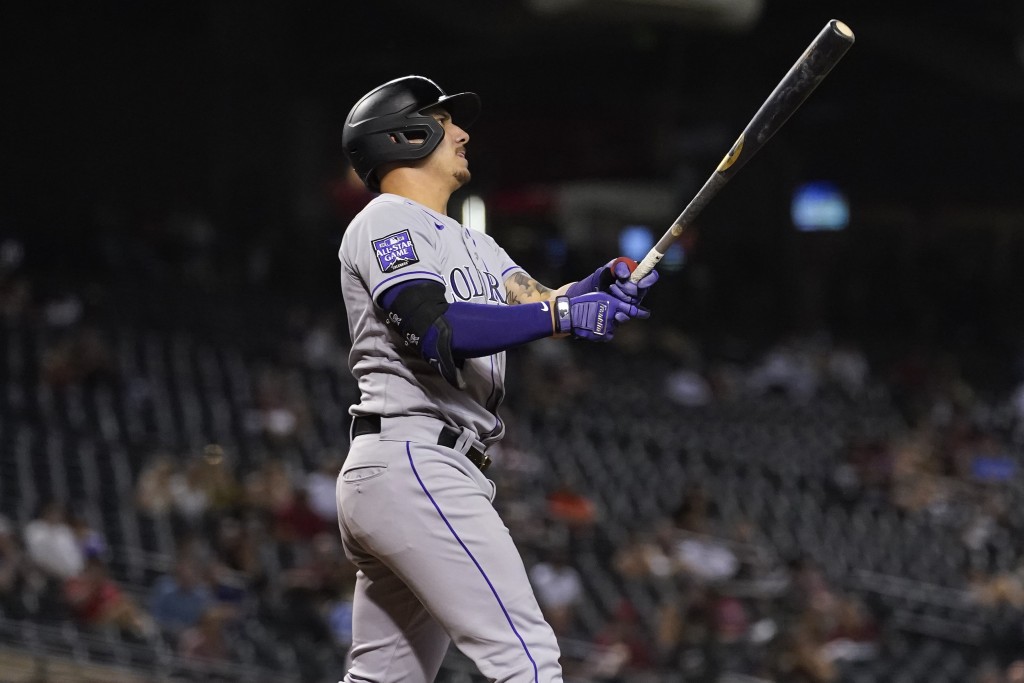 PHOENIX (AP) — Dom Nuñez hit a grand slam, Trevor Story had three hits that included a two-run homer and the Colorado Rockies pounded out 18 hits in a 14-6 win over the Arizona Diamondbacks on Saturday night.

It was a good start to May for the Rockies, who had the most losses in the National League during April with a 9-17 record. The top three hitters in Colorado's lineup all had good nights: Raimel Tapia had four singles and scored two runs, Story added a double to go with his homer and Ryan McMahon had two hits and four RBIs, including the go-ahead, two-run single in the fourth.

Arizona starter Zac Gallen (1-1) needed 93 pitches to get through four innings. He gave up four earned runs on six hits and two walks while striking out seven.

McMahon's error on a grounder was part of the reason the Diamondbacks scored a pair or runs in the third and pushed ahead 2-1, but the third baseman made up for the miscue the very next inning.

The left-handed McMahon sliced a two-out single to the opposite field, scoring Tapia and Story to give the Rockies a 4-2 lead. The Diamondbacks pulled to 4-3 on Carson Kelly's RBI single, but Story responded in the sixth with his two-run homer.

Story was out in front of Caleb Smith's changeup on a 2-2 count, but reached out and pulled the ball down the left-field line. The liner just cleared the wall, landing in the Arizona bullpen.

After Nuñez smacked his eighth-inning grand slam off Matt Peacock to make it 14-5, the Diamondbacks turned to infielder Asdrúbal Cabrera on the mound. Another infielder, Wyatt Mathisen, made his first career pitching appearance in the ninth.

Mathisen threw one pitch that registered 46 mph, but still threw a scoreless inning. Peacock had a particularly rough outing, giving up seven earned runs in one-third of an inning.

Andy Young had a pinch-hit solo homer for the Diamondbacks in the sixth, and Kelly brought home a run with a sacrifice fly in the seventh. But every time the Diamondbacks chipped away at the lead, the Rockies responded — and Nuñez's grand slam ended any suspense.

Arizona's fifth-year manager, Torey Lovullo, needs one more win to reach 300 with the team. He'd be the fourth manager in club history to hit the mark: Kirk Gibson (353), Bob Melvin (337) and Bob Brenly (303) are all in the club.

Rockies: Put RHP Antonio Senzatela on the 10-day injured list with a right groin strain. The move is retroactive to Friday. The team called up LHP Lucas Gilbreath from its alternate training site.

The teams play the finale of their four-game series on Sunday afternoon. The Diamondbacks will send RHP Merrill Kelly (2-2, 6.33 ERA) to the mound to face Colorado RHP Chi Chi González (1-0, 3.60).