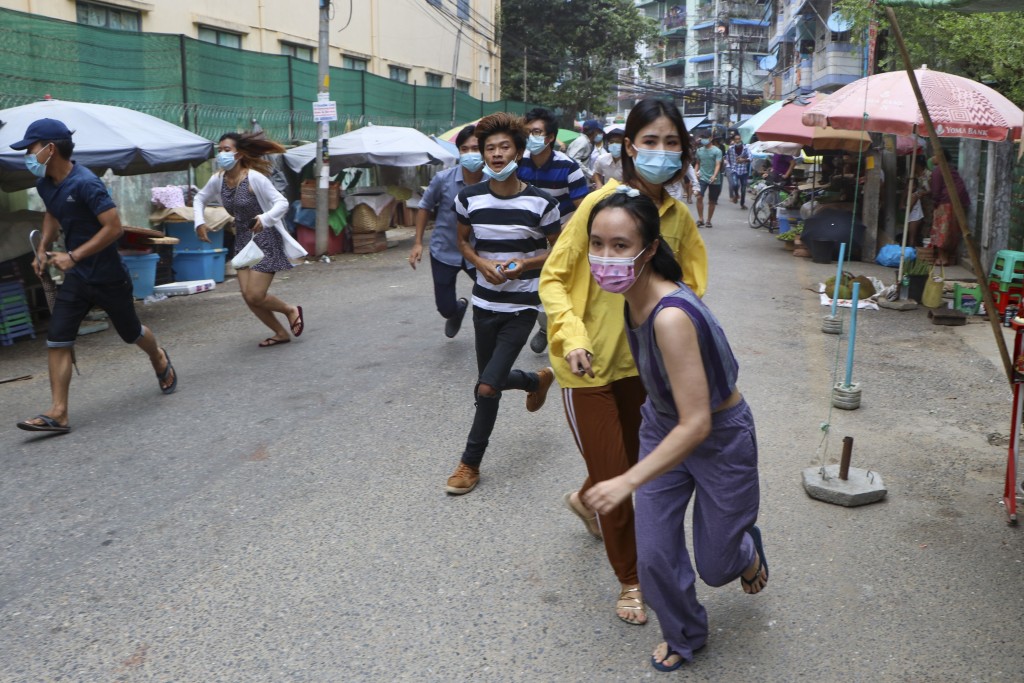 UNITED NATIONS (AP) — The strong, united demand for democracy by the people of Myanmar has created “unexpected difficulties” for the military in consolidating power after the Feb. 1 coup and risks bringing the administration of the nation to a standstill, the U.N. envoy for the country said Friday.

Christine Schraner Burgener said in remarks to a closed council meeting obtained by The Associated Press that her discussions in the region “compounded” her concern that the situation in Myanmar is deteriorating in all areas. She pointed to a resurgence of fighting in ethnic areas, more poor people losing jobs, civil servants refusing to work to protest the coup and a brewing crisis of families in and around the main city Yangon “pushed to the edge" for food, going into debt and trying to survive.

The U.N. special envoy spoke by video from Bangkok where she returned after traveling to Jakarta to be on the sidelines of the April 24 meeting of the 10-member Association of Southeast Asian Nations known as ASEAN which includes Myanmar and was attended by the junta’s military commander, Senior Gen. Min Aung Hlaing.

Schraner Burgener said she met the commander-in-chief on the ASEAN sidelines and they agreed “to keep details of the exchange discreet to allow for continued frank and open discussions,” but she assured the council she “amplified” on the statements its 15 members had approved.

The Security Council has strongly condemned the use of violence against peaceful protesters and the deaths of hundreds of civilians, called on the military “to exercise utmost restraint” and “on all sides to refrain from violence,” and “reiterated the need to fully respect human rights and to pursue dialogue and reconciliation.”

Based on her meeting with Gen. Hlaing, Schraner Burgener told the council that on Thursday she again requested to visit Myanmar. Her previous requests have been turned down by the military, which said the time was not right.

“In the past three years, I have built constructive relations and confidence with key actors in Myanmar and this would allow me to get straight to substantive exchanges on how the current deadlock could be resolved, if given access to the country,” she said. “My presence could also help calm tensions.”

The envoy said she also held “important discussions” with the foreign ministers of Indonesia, Malaysia, Singapore, Vietnam and Thailand as well as ASEAN’s secretary general Lim Jock Hoi, calling these meetings “a testament to the commitment of the United Nations to support ASEAN and ensure complementarity.”

Schraner Burgener said she plans to stay in the region in the coming weeks and will remain in close contact with ASEAN members to support “the timely and comprehensive implementation” of its “five-point consensus” on Myanmar’s crisis. It calls for the immediate cessation of violence, a dialogue among all concerned parties, mediation of the dialogue process by an ASEAN special envoy, provision of humanitarian aid through ASEAN channels and a visit to Myanmar by the association's special envoy to meet all concerned parties.

The Feb. 1 coup reversed years of slow progress toward democracy in Myanmar, which for five decades had languished under strict military rule that led to international isolation and sanctions. As the generals loosened their grip, culminating in Aung San Suu Kyi’s rise to leadership in 2015 elections, the international community responded by lifting most sanctions and pouring investment into the country. The coup took place following November elections, which Suu Kyi’s party won overwhelmingly and the military contests.

Since the ASEAN summit, demonstrations have continued in many parts of Myanmar against the junta, as have arrests and beatings by security forces, despite an apparent agreement by Hlaing to end the violence. Many demonstrators expressed discontent at the ASEAN meeting’s outcome, especially its failure to demand the release of political leaders. Suu Kyi was arrested in the coup and is among an estimated 3,400 people still being held.

Schraner Burgener told the council: “The release of all political prisoners and other detainees as well as full respect of human rights and fundamental freedoms will be paramount.”

She warned that “ongoing reports of lethal force, arrests and mistreatment since, risk undermining momentum generated from the ASEAN leaders' meeting."

“Confidence-building measures are urgently required,” she said, expressing hope that her visit will take place “as it could help provide space to move ahead on the consensus points.”

Schraner Burgener said fatalities are rising every day, citing the latest figures from the Assistance Association for Political Prisoners that more than 756 people have been killed and 3,450 arrested, charged or sentenced.

The United Nations estimates that around 20,000 people have fled their home and remain internally displaced in Myanmar while almost 10,000 have fled to neighboring countries, the U.N. envoy said, and the World Food Program says preexisting poverty, COVID-19 and the political crisis are likely to lead 3.4 million more people to suffer from hunger within the next six months.

“The common aspiration for democracy has united the people of Myanmar across religious, ethnic and communal divides like never before,” Schraner Burgener said. “Such strong unity has created unexpected difficulties for the military in consolidating power and stabilizing the coup.”

She said security forces have intimidated and arrested protesting health workers in an attempt to get them to return to work.

“The general administration of the state could risk coming to a standstill as the pro-democracy movement continues in spite of the ongoing use of lethal force, arbitrary arrests and torture as part of the military’s repression,” Schraner Burgener said.

In light of the current circumstances, she said, “I observed resounding political will in my engagements with regional leaders to end violence, enable dialogue involving all sides while immediately addressing the dire humanitarian and socio-economic implications of the crisis.”