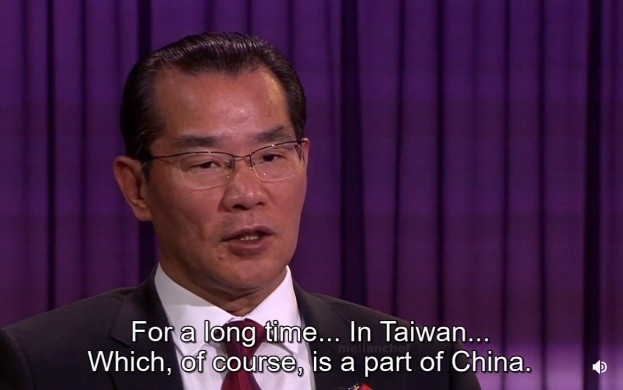 TAIPEI (Taiwan News) — In an interview with Swedish TV, China's Ambassador to Sweden Gui Congyou (桂從友) awkwardly conceded that Taiwan is a country, marking the second time in a month the "wolf-warrior" diplomat has fallen into a trap of his own making.

Earlier this month, Swedish journalist Jojje Olsson told Taiwan News that he had received four "threatening emails" this year from the Chinese embassy in Sweden over articles he wrote that were critical of Beijing's policies, particularly over Xinjiang.

Olsson, who speaks fluent Mandarin and English and is the author of six books, is one of the few Swedish journalists independently reporting on China in his native tongue.

In the fourth and most menacing email, the embassy on April 9 accused him of "colluding with Taiwan separatists, fabricating fake news to smear China, making extreme anti-China comments, spreading disinformation to provoke anti-China sentiments and sabotaging China-Sweden friendship." In an apparent attempt to discredit his reporting on China, the embassy said that although Olsson claimed to be a "China expert," he had "not been in China for more than five years."

Olsson pointed out that after being denied entry into China in 2016, he had stayed in Taiwan during the five years in question. This meant the Chinese embassy in Sweden had "tripped over themselves" and clearly "admit that Taiwan is not part of China.

On Wednesday (April 28), Gui Congyou took the chair on Swedish prime time TV talk show "30 minuter" (30 minutes), hosted by Anders Holmberg. During the interview, Gui appeared to stammer and falter on at least five occasions when asked about the atrocities in Xinjiang, according to Olsson.

When Holmberg asked Gui to explain what he had meant when he said Olsson would face "consequences" for continuing to write unflattering reports about China, the ambassador tried to attack the journalist's credibility. Reminiscent of the botched fourth email, Gui said that despite Olsson's claims to be a China expert, "He doesn’t do any research about Chinese issues in Sweden, nor does he do any research about Chinese issues in China."

The ambassador again fell into his own trap, saying, "Instead he ran to... for a long time..." and after an awkward pause managed to add "...in Taiwan."

Next, he mumbled an unfinished thought before trying to recover the narrative by saying, "Which, of course, is a part of China."

Olsson noted that this was the second time in two weeks Gui has made such a "Freudian slip" and wondered if, in fact, it is "the ambassador himself who is colluding with Taiwanese separatist forces?"