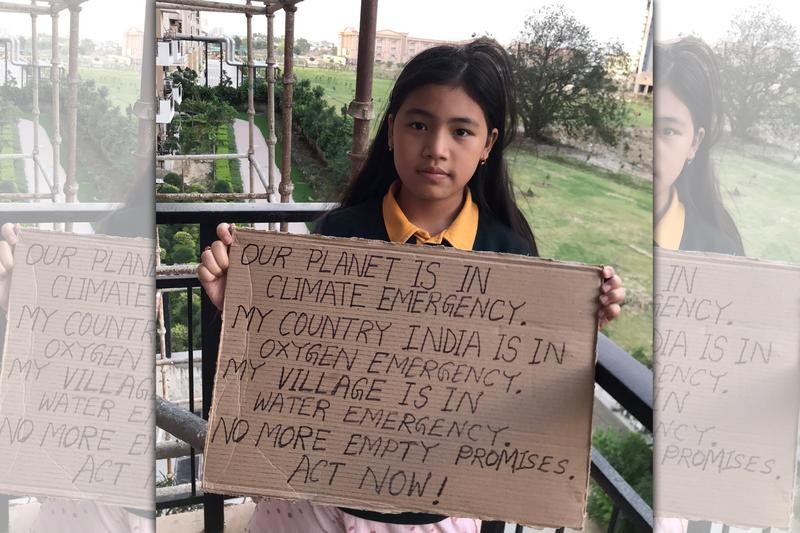 At nine years old, Licypriya Kangujam is one of the youngest climate activists in the world with her level of influence. Known as "India's Greta Thunberg," she has been advocating against climate change since 2018.

In June of 2019, Kangujam spent a week protesting outside the Indian Parliament House to pressure Prime Minister Narendra Modi to pass an Indian climate change law. In August of that year, she received the "World Children Peace Prize 2019," and in October of 2020, she was honored with the title "Rising Star" by the Earth Day Network.

During the 2019 United Nations Climate Change Conference, also known as COP25, Kangujam met with U.N. Secretary-General Antonio Guterres and presented him with four-page memorandum on behalf of the children of the world, calling on the organization to take decisive action on climate change.

Earlier this month, India began to suffer from a catastrophic second wave of COVID-19 infections, with daily new cases reaching a record 360,000 on Wednesday (April 28), according to India's Health Ministry. In response, Kangujam has been posting on her Twitter feed about areas and individuals in need of oxygen and beds.

She has also begun to call for aid from the outside world, and on April 27 she announced she was "even begging Taiwan Foreign Ministry" for assistance. She included a screenshot of an exchange in which she contacted Taiwan's Foreign Minister Joseph Wu (吳釗燮) for assistance.

In the screenshot, Wu could be seen stating, "God bless India and its magnificent people. We are working very hard to help." Kangujam thanked him but then pointed out that, specifically, India needs oxygen concentrators.

Emphasizing the desperate state of the situation, Kangujam added, "I'm begging you. We're dying!" Wu responded that his ministry is in discussions with "key decision-makers" and asked her to "pray for our progress and success."

During a legislative interpellation on Wednesday, Deputy Foreign Minister Miguel Li-jey Tsao (曹立傑) said that Taiwan is preparing to airlift oxygen concentrators to India at some point before Sunday. He described the shipment as the "first batch" and said they will be sent via national carrier China Airlines.

According to the Ministry of Foreign Affairs spokesperson Joanne Ou (歐江安), as soon as Taiwan became aware of the gravity of the situation in India, Wu offered support to Gourangalal Das, director-general of the India Taipei Association. She said the ministry had asked Taiwan's representative office in India to assess what medical supplies were needed and worked with Taiwanese firms to expedite the swift delivery of equipment.

According to the Times of India, the country has registered a total of 17.3 million coronavirus cases and over 200,000 deaths. On Wednesday alone, 360,960 new cases and 3,293 deaths were confirmed in India.

On Thursday morning (April 29), Joanne Ou (歐江安) announced the country would be sending 150 oxygen concentrators to India this weekend. Ou pledged that Taiwan will continue to send more relief in the coming weeks.

In response, Kangujam told Taiwan News that, "It's not enough, but the people of India will be forever grateful to Taiwan." She stressed that whether big or small, the aid "matters a lot during this crisis period in the country."

She said she is looking forward to more aid from Taiwan in the coming days and stated that it will build a stronger bilateral relationship in the future. "This is an opportunity to strengthen our relationship," said Kangujam.

I’m even begging Taiwan Foreign Ministry. I’m trying my best! Situation is out of control here. Let’s pray together! pic.twitter.com/R03xyL9MHs