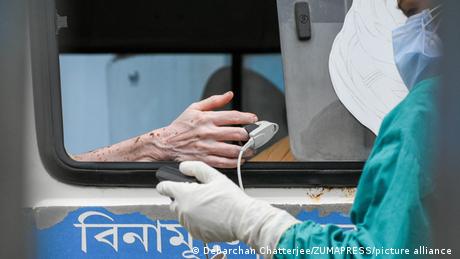 Shivam Sharma, a 37-year-old lawyer in Delhi, developed a mild fever on April 18 shortly after he had been in contact with a friend who had tested positive for COVID.

Sharma decided to play it safe, and drove to a coronavirus testing center in the Indian capital. But when he arrived, a long line wrapped around the building, and he decided to try another day.

However, over the next few days, Sharma's symptoms grew worse as he tried without success to reach out to several overwhelmed diagnostics centers.

He was told the testing centers were running over capacity, with no time slots and a shortage of testing kits and manpower.

"It was frustrating as my fever was running high and I was displaying all the classic symptoms of COVID, including a cough, sore throat and body pain," Sharma told DW.

Sharma finally managed to persuade a private lab to organize a home sample collection of an RT-PCR swab test at his home in Noida, a satellite city of Delhi.

"It was frustrating. I had to call certain influential people to organize my test," said Sharma.

Like other health care facilities in the country, India's COVID testing laboratories are completely overwhelmed by the the country's second wave. Backlogs of samples are piling up, as potentially infected people are left wondering if they have contracted the virus.

Don't waste time when it comes to COVID

Sharma did not wait for his test results to take action. His symptoms left him with little doubt that he had contracted COVID.

"I lost my sense of taste and smell, and I began to consult a doctor for medication and periodically checked my oxygen saturation levels," he said.

"A lot of things were running through my mind. I thought especially about the new double mutant virus, which is causing havoc during the current surge," he added.

Getting a COVID test has become an ordeal in Delhi. Home collection of samples have all but been stopped by most laboratories, which are overbooked and overworked. Sharma was lucky to get a test.

While waiting for his results, Sharma isolated himself in the house that he shares with his wife and ageing mother. He was worried that a delay in testing would lose him precious time in starting treatment and hospitalization if his situation deteriorated.

Isolating himself in his house while his symptoms flared was tough psychologically on Sharma.

"During the course of the day, I would check my oxygen saturation at least four times with the oximeter and also check my temperature periodically," he said.

"I kept hydrating myself and was constantly watching videos of various help groups and doctors instructing what needed to be done when quarantining oneself. That helped," he added.

Quarantining in a room by himself, Sharma's biggest concern was that his family would contract COVID.

"That was constantly playing on my mind, and I took particular care on this count. I simply could not allow them to fall sick in the process," he said.

"I did not see them for a week. It was tough, but it was in the interest of everybody," he added.

Food was left outside his room, and on most occasions, Sharma ensured that disposable plates and cutlery were used.

During his isolation, Sharma watched as news of the pandemic in India grew worse by the day.

"It was distressing to say the least to find people turned away from hospitals, dying without getting oxygen support or ventilators," Sharma said. "Even in normal times, such news is stressful and horrific."

"In my condition, while I was recovering, it was numbing to watch news of oxygen shortages, and see the dearth of ICU beds and realize all the hurdles in treatment that ordinary people are facing," he added.

"I was lucky that I possibly got a mild case, or that I was quick to quarantine myself and begin treatment," he said.

"I sometimes wonder what many other people who are unaware of the effects of this deadly disease may be going through," he added.

Sharma got a positive test result on the night of April 24, six days after he first felt symptoms, and three days after his swab collection.

"I was lucky to have begun medication. If I had not, and waited on the test results, it would have been a different story."