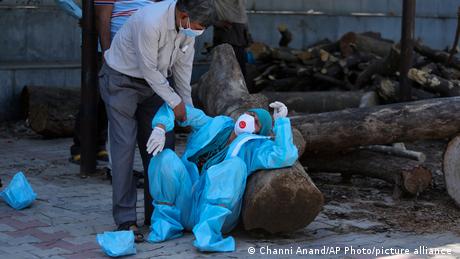 The Indian government is ordering social media sites such as Twitter, Facebook and Instagram to block posts that criticize management of the renewed nationwide public health crisis brought on by the coronavirus pandemic.

India is current facing a record-breaking surge of COVID infections and deaths, with people dying in front of packed hospitals, and crematoriums operating to capacity.

A majority of the tweets pulled down by Twitter were critical of the government's inability to secure medical supplies, hospital beds and oxygen.

The government said the posts were removed because certain users were using Twitter to spread fake or misleading information and create panic over the COVID-19 situation.

"This decision has been taken to prevent obstructions in the fight against the pandemic and a breakdown of public order due to these posts," said an official with the Ministry of Electronics and Information Technology.

In February, Twitter blocked more than 500 accounts linked to the ongoing farmer protests against agricultural reforms after the government issued a legal notice.

Media watchdogs believe that the ruling Bharatiya Janata Party (BJP), which has been in power at the federal level since 2014, simply cannot tolerate criticism and wants to control the public narrative.

"Of course, pandemics lead to misinformation, but a blunt censorship tool such as wide-ranging takedowns is most unhelpful as it suppresses important information," she added.

"Earlier, what we witnessed was shoot the messenger. Now, the government is shooting the platform too," Sevanti Ninan, a media critic, told DW.

"Covering the pandemic is a huge challenge for the press and we need to know how it is playing it out on the ground," said Ninan, who is founding editor of The Hoot, India's first media watchdog.

Indian media has become polarized over the years, and sometimes coverage critical of the government is painted as an attempt to tarnish India's image.

By creating a new template for media-government relations, the government has, over the past few years, tried to de-legitimize the media as an institution, while at the same time attempting to co-opt a select few media houses to be part of the ruling establishment.

For instance, when hospitals in Delhi were clamoring for oxygen supplies, several "government friendly" television channels blamed the ongoing farmers' blockade in the outskirts of the capital for the inordinate delays.

"Several channels have debated whether anti-India lobbies are out to discredit the country and if this is a conspiracy," the official told DW.

"Is this not a veiled threat to the media to not report what is happening on the ground? This has a chilling effect,” a local journalist from Lucknow told DW.

The foreign press corps in India, too, has had to face not-so-subtle pressures to tone down their coverage of the ongoing surge, which has become headline news around the world.

"We got calls from some key people in the government after we did a report on how the record death toll was hiding the real extent of the COVID crisis,” a senior reporter from a US-based media group told DW.

"There has been no direct pressure or decree yet to tone down [coverage], as that would backfire on the government and show it in a poor light. But what we are witnessing is organized trolls on social media discrediting our coverage,” India's bureau chief of a public broadcaster told DW.

On Monday, the Indian High Commission in Canberra wrote a letter to The Australian's editor-in-chief, Christopher Doe, taking offense to an article which attributed the devastating second wave of coronavirus in the country to the missteps and complacency of Prime Minister Modi.

The commission called on the newspaper to publish a correction of the article, which was titled: "Modi leads India into viral apocalypse."

"The government is far more concerned with criticism from outside, as that is something they cannot control," said Ninan.

In June of last year, journalists critical of the government's handling of the coronavirus crisis were also harassed, and in some cases, arrested.

Using the Disaster Management Act, officials slapped journalists with charges for reporting on government corruption amid the pandemic, and on how doctors faced food shortages while working during the lockdown.

Last week, Reporters without Borders, listed India under countries considered "bad" for journalism, and among the most dangerous places in the world for journalists. Meanwhile, for the second consecutive year, India was ranked 142 among 180 countries on the 2021 World Press Freedom Index.