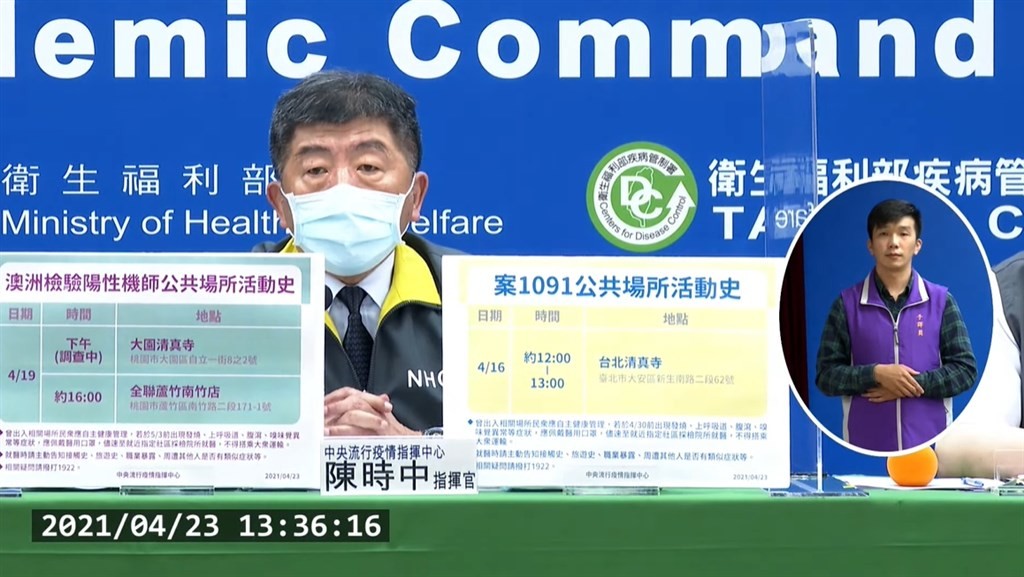 Health Minister and CECC head Chen Shih-chung (陳時中) announced the infections at a press conference. The latest local cases are tied to an Indonesian cargo pilot who had just been diagnosed overseas.

The CECC announced that on Wednesday (April 21), it received notice from an airline that an Indonesian cargo pilot in his 40s had flown to Australia Tuesday (April 20). Once there, he began to experience a sore throat and soon tested positive for COVID-19.

The CECC immediately launched an epidemiological investigation into the pilot's recent movements and contacts in Taiwan. Among these contacts, two have tested positive for COVID.

Chen said that case No. 1,090 is an Indonesian male in his teens who is a relative of the pilot and had no recent history of international travel. On Wednesday, he was told to begin self-health monitoring, and the health department arranged for him to undergo a coronavirus test.

On Thursday (April 22), he began to experience a dry throat and dizziness, among other symptoms, and was diagnosed with COVID-19 on Friday (April 23), with a Ct value of 30.

According to Chen, case No. 1,091 is an Indonesian male in his 50s and a colleague of the pilot. He had been on duty in the U.S. from April 4-10 and was asymptomatic during that period.

After returning to Taiwan, he underwent quarantine until April 15. A coronavirus test taken at that time came back negative.

On April 16, he felt fatigued and slightly hot. At noon that same day, he, the pilot, and case No. 1,090 went to the Taipei Grand Mosque together.

He developed a mild cough on April 18. His symptoms improved after taking over-the-counter medication.

As he was planning to visit relatives in Indonesia, he paid for a coronavirus test on Wednesday. He was diagnosed Friday, with a Ct value of 27.

The CECC stated that a preliminary investigation has found that all three cases had been involved in group activities at the Taipei Mosque. Whether they are part of a cluster infection remains to be determined.

On April 19, they also visited the At-Taqwa Mosque in Taoyuan (time still unknown) and a PX Mart in Taoyuan's Luzhu District at about 4 p.m.

Thus far, the health department has identified 58 contacts for the pilot, including the two positive cases (1,090 and 1,091), eight people who have tested negative, 23 who are awaiting results, and 25 who have yet to be tested.

As a precaution, testing will also be carried out on all cargo crew members currently undergoing quarantine or self-health monitoring.

Since the three cases were active in public places for two days before hospital isolation, the public is being advised that if they were at the locations visited by these individuals, they should immediately commence self-health monitoring for 14 days.

If someone suspects they have symptoms, they should wear a mask at all times and seek medical attention immediately. It is important to carefully list all recent movements and contacts when seeing a physician.